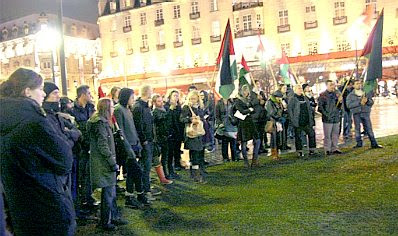 Our Norwegian correspondent The Observer has written an essay about the political Left in Norway and their untruthful claims about the Counterjihad community. He includes this introductory note:

To say that the Counterjihad movement is a fascist movement, as members of the Norwegian intelligentsia claim, is as ludicrous and so far from the truth as one can possibly get, and I think it’s very important to confront them on this. Certain things can’t be overstated.

By the way — one of the witnesses for the defence in the Breivik trial, a hardcore leftist from the Blitz movement, actually wrote an op-ed in Aftenposten today saying that under no circumstances will he show up for the trial and testify for the defence. His main points were that he refuses to be used as a pawn in Breivik’s virtual chess game and thus help the rabid dog promote himself and his sick manifesto. No one has criticised this individual for declining to testify. I wonder what will happen if Fjordman decides not to testify. Will they be just as understanding then?

The trial of the Norwegian terrorist Anders Behring Breivik is scheduled to start in Oslo early next week. In the lead-up to the trial there has been lots of talk from various left-wing public figures and left-wing organizations about the need to expose the anti-Islamic ideology which they erroneously claim influenced Anders Behring Breivik into carrying out his sick attacks.

They couldn’t be further from the truth, because the anti-Islamic ideology is opposed to everything that Anders Behring Breivik did on that horrible day. Anders Behring Breivik’s warped mind is much more in tune with those of radical Muslims and violent jihadists who don’t see anything wrong with killing innocent civilians in their struggle to achieve the global fascist regime that the Koran mandates. One of the most prominent tenets in the Counterjihad doctrine is that it under no circumstance condones terror as a means to achieve an end. As a matter of fact the Counterjihad community came about as a direct result of the violent and fascist behaviour of various Islamic radicals and Islamic regimes.

The insidious and highly dishonest assertion that the Counterjihad community is partially to blame for this attack is without any merit whatsoever. Most importantly, it’s a completely irrational claim. The anti-Islamic movement embraces traditional Western libertarian values which are part and parcel of its philosophy, values which Breivik through his evil deeds and his twisted manifesto has shown that he wholeheartedly abhors. The violence and utter rejection of basic democratic principles displayed by radical Muslims is the entire reason why a Counterjihad movement exists. If Islam had been a democratic religion, there would be no Counterjihad movement. 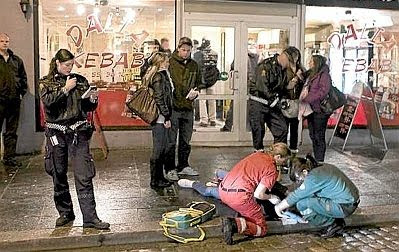 Those who identify with the movement realize that Islam constitutes a serious threat to our way of life, a conclusion that even the most avid leftists should be able to reach if they were more honest with themselves. The Counterjihad movement came about because it wants to protect the rights and liberties that we in the West take for granted. The movement utterly rejects the idea that a political ideology disguised as a religion should be allowed to use violence and intimidation to impose its world view on others.

Bearing this in mind, it’s rather puzzling that the Left in Norway find the ideology of the Counterjihad community so despicable and hateful, and one can of course only speculate why they are so vociferous in their criticism of it.

Perhaps it’s because Counterjihadists are staunch supporters of such ‘despicable’ things as freedom of religion and freedom of speech? Or is the fact that the Counterjihad movement believes in the rule of law, and that they reject religious and political persecution in any way shape or form?

Or is perhaps the fact that the Counterjihad movement rejects all forms of physical abuse against women and children, and completely opposes forced marriages and honour killings, which by the way are rife wherever Islam is in charge?

Or maybe it’s because the Counterjihad movement completely reject any acts of terror and the deliberate targeting of innocent civilians?

Or is it because Counterjihadists embrace the notion that everyone is born free and should be allowed to live their lives as they please within the boundaries of the law without government interference or having government-sanctioned ‘political opinions’ rammed down their throats?

It is hard to find any other reasons for this bizarre animosity from the Left, because this is the ideology behind the Counterjihad movement, which in reality upholds classical Western libertarian values, and as mentioned earlier in this essay, represents values that are diametrically at odds with those of Anders Behring Breivik.

Perhaps we need to take a closer look at the ideology behind the political Left in Norway to get a clearer picture of the situation.

The prevalent ideology of the Left in Norway is ‘democratic’ socialism, which of course is the misnomer of the century. This undemocratic philosophy is a slightly diluted form of standard classical socialism. It is important that people realize that it is an offshoot of mainstream communism, an evil ideology which is responsible for almost 200 million lives and unprecedented human-rights violations all over the globe. The communist ideology is a hardcore fascist system, a trait which it shares with Islam. It completely rejects the notion that humans are individuals who have certain inalienable rights that can’t be taken away from them. It is also important to realize that socialism was the main ideology behind the dictatorship in the Soviet Union and it was the ideology chosen by the fascists in Nazi Germany, admittedly in a slightly different form, but with the same fascist traits.

Yes, there are diametrical differences between the Counterjihad movement and the political Left in Norway, no one is denying that. Let’s touch upon some of those differences here.

The political Left in Norway are supporters of a strong and all-encompassing political regime, namely their own. They support the idea of outlawing political views that go against their ideology, including criminalising criticism of Islam, multiculturalism, feminism and alternative lifestyles such as homosexuality. They embrace the use of awareness campaigns that promote their own political agenda and mock those of their opponents. They embrace the idea of state financial support for the national media, which in an ideal society should be completely independent and shouldn’t have any ties whatsoever to the authorities. They also wholeheartedly support any measures that increase their stranglehold on society, and which they use to the fullest.

It is surreal to hear members of the AUF, who are hardcore leftists, criticizing Counterjihadists for having ‘ideologically’ contributed to the 22/7 attacks when they themselves over the last thirty years have unquestioningly given moral support, and recently — through their mother organization, the Norwegian Labour Party — given substantial financial aid to Palestinian terrorists groups such as Hamas, whose stated goal is to wipe the state of Israel off the map, and who actively encourage Muslims all over the world to kill Jews.

But then again maybe it isn’t that hard to comprehend, bearing in mind that the political Left in Norway are known all over the world for their overtly anti-Jewish sentiments.

It is strange to listen to people from the Left in Norway, many of whom are diehard anti-Semites, i.e. people who despise people for no other reason than their ethnicity, criticise individuals, in this case anti-Islamists, who speak out against a religion that rejects the notion of civil liberties, encourages the killing of Jews and Christians, and mandates the introduction of global fascism.

Maybe it’s more appropriate to expose the ideology behind the political Left in Norway instead and challenge the political direction that they have staked out for the people of Norway, especially since many Norwegians are deeply opposed to their political agenda.

Maybe the trial of the sick beast from Oslo is what is needed to shed some light on these matters and set the record straight. If that were to happen then at least one good thing will come about as a result of this deeply tragic event. The accusations from the Left shouldn’t be allowed to remain unchallenged, because they are incorrect and their rhetoric reeks of intellectual dishonesty.

4 thoughts on “A Crash Course for the Norwegian Left”