Late last month the United States Congress backed off from any immediate action on SOPA (the Stop Online Piracy Act) after widespread objections from many sources, including a website blackout by Wikipedia and a prominent public protest by Google. Opponents were rightly concerned by the potential for abuse that would infringe internet users’ privacy, freedom of speech, and other civil liberties.

The equivalent of SOPA in the European Union is ACTA (the Anti-Counterfeiting Trade Agreement). Since the EU has no democratically elected deliberative body responsible for proposing legislation, the implementation of ACTA has to be accomplished by other means. The initiative is vulnerable to the decision by any individual country to withdraw from ratification, which is exactly what Poland has just done.

Many thanks to JLH for translating this recent article from Junge Freiheit:

Net Community Gears Up for Demonstrations on the Weekend 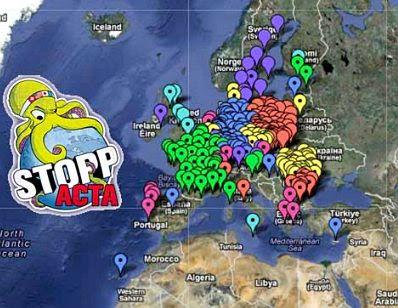 Berlin — The internet community in Germany is preparing for a number of rallies on the coming weekend. Thus far 55 demonstrations for February 11th against the Anti-Counterfeiting Trade Agreement (Acta) have been announced. Just in Germany. It could be the largest demonstration of this kind ever.

Acta is an agreement made behind closed doors on the initiative of the USA, which is now supposed to take effect after being initialed by most EU states. Among other things, Acta would make internet providers responsible for the actions of their clients. They would be obliged to bar any user who has offended against copyright law. The new regulations could also rescind mail secrecy and make sites like Youtube impossible, say critics.

The relevant formulations in the text of the agreement are very vague, whatever proponents may say. The feared measure cannot be effected with this agreement, says Justice Minister Sabine Leutheusser-Scharrenberger (FDP). The Europe-wide resistance is now gathering against the agreement, on which the Bundestag has yet to vote. In the front line are the internet community and organizations like the Pirate Party or Anonymous which are in all-out attack mode against it. Cleverly, leftist parties like the Greens have made the cause their own, but also the Youth Union (Junge Union) is demanding; “Acta ad acta legen!” (Make Acta inactive).

Poland has already withdrawn from the ratification process after repeated mass demonstrations there which were hardly reported at all in the German media.