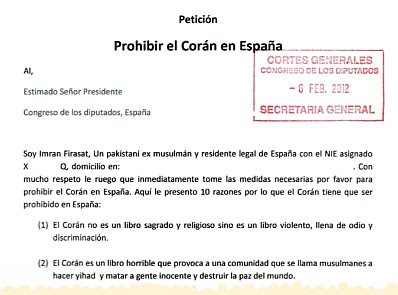 A Pakistani apostate now resident in Spain wants the Spanish government to ban the Koran. Below is the message we received yesterday from “Imran Firasat”, the owner of the Spanish website World without Islam:

I have formally asked the Spanish government through a legal petition for the prohibition of the Quran in Spain.

Many newspapers from Spain and some other European countries have published this news. I would like to request you to publish this very important and necessary news on your website please. We have to help each other in our fight against the Islamic dragon.

My petition calling for the prohibition of Quran is the sign of a grand revolution which we shall bring together against Islam. With this email I send you scans of the petition presented to the numerous institutions of Spanish Government. And below here I send you some links of media which published this news, and then after the links you can find the English translation of the news.

The English translation of the news:

A Pakistani settled in Spain asks formally “the prohibition of Quran”

“Imran Firasat” A Pakistani citizen with legal residence in Spain as a political refugee has presented an official petition to the numerous institutions of the Spanish government calling for the prohibition of the Quran.

In the document presented to the government of Spain, Imran reveals 10 points which will support his petition for banning the Quran:

10 thoughts on “No Quran in Spain”