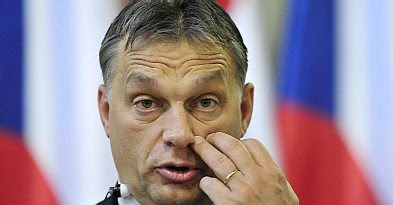 Hungary has been in the news a lot in recent weeks, thanks to its government’s move to assert control over the Hungarian Central Bank. The European Central Bank has reacted strongly against the action, saying that the Hungarian government “could undermine [the central bank’s] independence.”

Well… From the point of view of Brussels, any institution that is not fully controlled by the European Union has had its “independence” compromised. Central control by the ECB is liturgically correct; control by a national government is rank heresy.

The following article from Politically Incorrect provides some background on the current situation in Hungary. One of the more interesting policies proposed by the new Hungarian government is an initiative demanding that the former Communists answer for their crimes against the nation — which can’t help but annoy the mandarins of the EUSSR.

All Europe is ruled from Brussels. All Europe? No, a small country is walling itself off from internationalism at the cost of its population. In the elections in 2010, the conservative party Fidesz received over 50% of the vote in the country.

Viktor Orban, who had already been minister-president from 1998 to 2002, was elected as new minister-president. Several reforms have already been introduced in Orban’s new term in office. Among them a new media law which emphasizes more strongly legal protection for children and a clause according to which the media are obliged to present balanced reporting.

Now German media are reporting mass protests in Hungary. The organizations there spoke of more than 100,000 demonstrators. The German media reported several times ten thousand or more than ten thousand. Why are they demonstrating? The rightist conservative minister-president Viktor Orban adopted several amendments to the constitution which take effect on January 1, 2012. Among other things:

It is no wonder that the EU and the German media are now reporting negatively on Orban, who by democratic means of a direct mandate and the dropping out of smaller parties who did not clear the 5% hurdle, has earned over 50% of the vote and achieved a strong majority in the parliament, and is now using it. The EU is considering further steps. First of all, there will be no financial aid to the economically battered country. Legal measures against Hungary are also on reserve in Brussels. Whether there will be a political boycott against Hungary remains to be seen. In all this, the EU should keep in mind that the SVP is the strongest political force in Switzerland, the FPÖ at the moment is running ahead in the polls in Austria, Marine Le Pen has a good chance if she enters the presidential race in France, and in many other European countries, liberal to conservative forces do not wish to cooperate with the course of the EUSSR. Not least Geert Wilders in the Netherlands.

Before Orban, Hungry was governed by the Hungarian socialists under minister-president Ferenc Gyurcsany. The government knowingly led Hungary into bankruptcy, while, as in Greece, inflating the bureaucracy. In a confidential speech, Gyurcsany admitted to having lied to Hungarian voters and spoke contemptuously of Hungary. The speech was later published. The Frankfuter Allgemeine Zeitung writes that the demonstrations are initiated first and foremost by the Socialists.

8 thoughts on “Hungary Under Pressure”