In the advanced stages of the Multicultural society — should we call it the “Multicultural Metastasis”? — the noble ideal of diverse ethnic groups coexisting in harmony ceases to receive even lip service. As soon as a large enough proportion of Muslims are present in the local environment, Islam begins to dominate, tolerance for any other group goes out the window, and Islamic demands grow to control all aspects of the shared public space.

Such was the case in a Kreuzberg school in Germany. A new book written by a former student describes what life was like at her school, where 80% of the students were foreigners, mostly Turks.

Many thanks to JLH for his translation of this brief review from Europe News:

The Book Schulfrust [Aggravation at School]: 10 Things I Hate About School
by Viviane Cismak 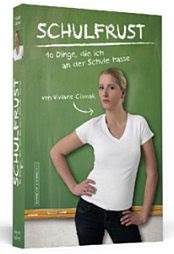 Presently running in BILD magazine is a series by the 20-year-old author Viviane Cismak, which describes everyday life at a Kreuzberg school, where the students being taught are 80% foreigners. Her thesis: The ideal “multiculti” has devolved into an Islamic “monoculti”, because neither teachers nor students dare to do anything about intimidation by young, masculine Muslims.

“There is no longer any question of diverse cultures mixing with one another and being treated equally in my Kreuzberg school,” she says. “To be precise, there was only one culture, or religion, whose needs were considered here: Islam.”

The former student describes how her teachers did all they could to avoid rubbing the Muslims the wrong way. So there was no pork in the cafeteria, and in the bakery located near the school the spoken language was Turkish.

The most frequent topic of conversation in class was the hijab question. Muslim students openly admitted oppression of women. They had to be veiled, because otherwise, affairs, marital infidelities and other “bad things” could happen.

Cismak further describes the abusive terms that were current in the schoolyard. “You Jew” and “you slut” were used regularly. The girls were affected by that, and shut down their social and party life because of potential bullying. The young author emphasizes: “To be viewed as a slut, all an 18 year-old girl had to do was to have a boyfriend. On the other hand, a boy was treated like a king if he picked off one girl after another.”

7 thoughts on “From Multiculture to Islamic Monoculture”