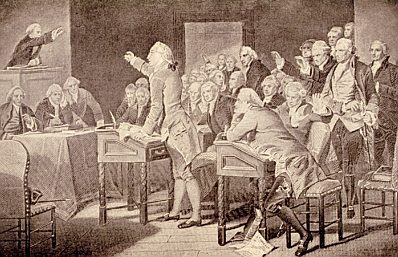 The right to speak and publish freely is currently under assault in all Western democracies.

In some countries, and especially in the European Union, the Universal Declaration of Human Rights is now interpreted to mean that religious freedom includes the right not to be insulted by statements about one’s religion. At the instigation of the Organization of Islamic Cooperation, national constitutions are being rewritten or reinterpreted to allow exceptions to the right to free speech when the “defamation of religion” is involved.

Free speech is being actively suppressed in Western Europe, where those who criticize immigration and Islamization are frequently harassed, fired from their jobs, arrested, charged, prosecuted, convicted, and fined. In the near future we can expect that someone in Europe will go to prison simply for expressing his opinion about the Religion of Peace. Britain, Sweden, the Netherlands, France, and Austria are actively vying to see who can be first to incarcerate a Counterjihad dissident.

Notwithstanding the protections afforded by the First Amendment, the United States of America is well on its way down the same evil path. Christians who proselytize on the streets of Muslim neighborhoods have discovered to their dismay that existing statutes concerning incitement, intimidation, disorderly conduct, and breach of the peace can be utilized to arrest and remove infidels who insult Muslims, even if the charges are later dismissed.

To make matters worse, a direct assault on the First Amendment is on the horizon, with Hillary Clinton’s promise to the OIC that the United States will work to implement the UN resolution requiring member states to pass laws that criminalize the “defamation of religions”.

An end run around the Constitution may also be available in the recently-passed National Defense Authorization bill, which permits the president to order indefinite military detention of American citizens, even within the United States. The rationale is that we are in a “time of war”. The war, however, has never been declared, and the enemy is unnamed — except, of course, as “extremism”. And we all know who Barack Hussein Obama considers to be the “extremists”. The NDAA does not bode well for tea-partiers, Islamophobes, Ron Paul supporters, and other “right-wing extremists”. If nothing else, the feds will be forced to detain a few of us just to prove they are not engaging in “profiling”.

This is the state of free speech in the Western world ca. 2012. The current plight of free expression, like so many other rights, is a reminder of the old admonition: Use it or lose it.

Free speech is the most important of a constellation of rights that also includes the following, among others:


These rights form the collective basis for what we generally consider the Rule of Law. They serve to check the excesses of the power-hungry State. In the United States and the rest of the British diaspora, these rights ultimately derive their legitimacy from the ancient precepts of the English Common Law.

They are not granted to citizens by the state, nor to subjects by the monarch. They are God-given rights. They are the gift of the Creator to His Creation. They may be — and often are — usurped by a tyrannical State, but such usurpation can never gain legitimacy, no matter how long it persists.

It is the right — and even the duty — of conscientious and morally aware individuals to band together and overthrow any system that revokes these rights, and re-establish the Rule of Law. This is what the Declaration of Independence proclaimed in 1776, and what the Constitution attempted to secure in 1788.

It is clear that we are moving into an era in which the Rule of Law no longer applies to citizens of the Western democracies who have long been accustomed to its benefits.

The denial of any or all of the rights described above is a violation of what I call the sovereign autonomy of the individual.

The genius of European Christianity lay in its identification of the individual as an autonomous source within God’s creation. From this insight arose the concept of Natural Law, whose precepts explicate and codify the rights of the individual within a secular polity. The individual may be said to possess a sovereign autonomy, since he recognizes no one but his Creator as a source of permanent authority. While exercising their sovereignty, individuals may grant their government authority over themselves, but only on a temporary and contingent basis.

We who are experiencing the current usurpation of the Rule of Law would do well to keep our sovereign autonomy in mind.

The most important fact to remember is this: The State may harass you and impoverish you. It may incarcerate you. It may even kill you, but it cannot take away your sovereign autonomy.

Many courageous souls have borne witness to their sovereign autonomy, even amidst the horrors of imprisonment in Nazi concentration camps. Committed dissidents such as Andrei Sakharov, Alexander Solzhenitsyn, and Vaclav Havel endured Communist tyranny and the gulag by refusing to surrender their sovereign autonomy. Whether copying out samizdat literature, or helping other dissidents escape the agents of the state, or simply speaking out clearly when to do so could mean torture and death — these brave people remind us that our God-given rights are always present, ready to be exercised, until the moment our lives are extinguished.

Sovereign autonomy cannot be taken away from any conscious individual — it can only be given away.

It is difficult to affirm one’s sovereign autonomy when the vast majority of one’s fellow citizens are passively surrendering their own. Being the first to speak out is a thankless task, as Geert Wilders, Elisabeth Sabaditsch-Wolff, and Jussi Halla-aho have discovered. Although a majority of the rest of the population may secretly support a vocal dissident, its silent passivity makes his dissent a lonely occupation.

These conditions are slowly changing, however, as the forces of repression converge with global economic hardship. The more people who feel they have nothing left to lose, the more who are likely to speak up. The harder the repression, the greater the public awareness of what has been lost.

The habit of free speech has been ground out of us over the last forty years. It will require a conscious act of will to reassert it. We must have the presence of mind to say, “I am endowed by my Creator with certain unalienable rights, that among these are…”

Over and over again. In as many ways as possible.

It is understandable that many people may decline this option. There is so much to lose — wealth, employment, friends, freedom — and so little to gain. Those with small children or aging parents will rightfully choose the more pressing imperative to take care of their own.

Yet some dissidents may be willing to risk everything for the sake of preserving their sovereign autonomy. For the sake of the cause, some of us may decide to “pledge to each other our lives, our Fortunes, and our sacred Honor” to the struggle for freedom of speech.

There comes a time when one’s own integrity requires taking a stand, no matter the consequences. As Christ reminds us (Matthew 16:26):

“For what is a man profited, if he shall gain the whole world, and lose his own soul? or what shall a man give in exchange for his soul?”

The usurpation of the Rule of Law is a soul-destroying process for all who decide to submit to it.

Those who refuse to submit must speak up loudly, clearly, and frequently.

Those who decide to reclaim their sovereign autonomy must also be mentally prepared to bear the temporal consequences for their actions.

They may have to surrender the world, but in doing so they will regain their souls.

In closing, some words of wisdom from Lao Tsu (Tao Te Ching, Chapter 13):

What do you mean by “Accept misfortune as the human condition”?
Misfortune comes from having a body.
Without a body, how could there be misfortune?

23 thoughts on “Reclaiming Our Sovereign Autonomy”