The culturally enriched Vollsmose neighborhood has been in the news yesterday and today. Ethnic Danes have increasingly been subject to harassment and attacks by gangs of “youths” in the area.

Our Danish correspondent TB has this to say about what’s happening:

The situation in Vollsmose is a national tragedy, if you ask me. And the stories keep coming in: the next one is about a couple who almost got themselves killed for talking to the police.

All these stories are reaching Christiansborg [Parliament] now. The Danish People’s Party have started to raise these issues at the highest levels.

Here is the most recent report from the Islamic Enclave Vollsmose of Funen. Pay close attention to the reaction of the police officers in the car when the shooting starts. They simply leave this poor couple unarmed and uncovered in the middle of the battle zone.

Think about it. What a signal to send to the ‘Representatives of The Religion of Peace’!

TB has kindly translated another article, this one from today’s B.T.:

Smear campaign in Vollsmose: ‘They tried to kill us’. 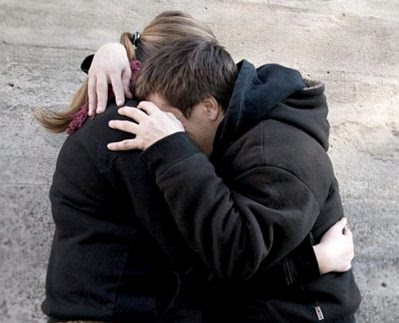 [Photo caption: The couple do not dare to reveal themselves, even though they both have moved out of Vollsmose. (Photo: Sonny Monk Carlsen).]

A Danish couple was nearly killed because they spoke with the police in Vollsmose. Now they have moved out of the area.

It was nearly fatal for two ethnic Danes to talk to police in Vollsmose. Not only were they fired upon with automatic weapons, over the next two years they were attacked with stones, vandalism and harassment.

The couple wishes to remain anonymous, but have chosen to tell about their lives in the Vollsmose ghetto after www.bt.dk yesterday reported how the ethnic Danes are targets in a burglary smear campaign. A smear campaign where nine out of ten of the 150 burglaries that have hit the district of the past four months — according to a police officer — were aimed directly against ethnic Danes.

The young couple’s nightmare began on Thursday 13 August 2009, as they walked up the Vollsmose Alle. The district was in flames that day after a 19-year-old immigrant had tried to run away from police and then crashed his BMW.

“Suddenly a police car came rolling towards us — lights out. The officer rolls down the window and asked if a lot was burning down, where we came from. I could confirm that it did,” says AH, who — at that time — had only lived in Vollsmose for about a month.

“As I answered the officer shots started coming in. Someone was actually shooting at the police! My boyfriend and I threw ourselves to the ground and crawled into the bushes behind us. Then we heard the police car screeching, while it backed away from the scene.”

Frightened, the couple kept lying there until the danger had passed and then hurried home.

“I was thinking: ‘can we live in such a hell ?’ But we agreed that the rioters should not be allowed to scare us away.”

A 35-year-old man was later jailed for firing 8-10 shots at the police with an automatic weapon. After that the trouble in the area calmed down for a short time. But the nightmare for AH and HH had only just begun.

“Young immigrant boys started calling us ‘sticking pigs’ in the street, and my girlfriend was called a whore. We were harassed on the bus until we had to get off, and they twice tried to run my son (who is 10 years old) and me down,” says AH.

Afraid in the kitchen

The harassment made AH’s girlfriend HH move to Sjælland in March 2010.

“I needed a sanctuary where I could live without being afraid. In Vollsmose we did not even dare to stand in the kitchen making dinner when it was dark because we were afraid they could see us through the window. I began to suffer from anxiety attacks,” she says.

AH, however, stayed in Vollsmose, and he refused to stop talking to police in the area. 12th May 2011 things escalated, however. Within a space of three days the couple’s home was attacked with stones three times.

“One of the times we were not at home. We found a paving stone in my son’s bed when we arrived. If he had slept there as he usually does, he could have been killed. The second time HH was nearly hit in the chest. So I have no doubt that they wanted to kill us.”

AH now began to wear a bulletproof vest, he suffered from insomnia, and always had a backpack ready with clothes. Just in case he had to flee from the apartment in a hurry.

“So I accepted the inevitable a few weeks ago and decided to move. But it irritates me constantly, and I still remember how they stood there. Laughing scornfully at us while we carried out our moving boxes.”

Local police in Vollsmose confirm the many incidents of vandalism against the couple, and that they were in contact with an unknown citizen when the shots were fired at the police car back in 2009. But the police did not want to go into details about the couple’s case.

15 thoughts on “A National Tragedy”