Below is a follow-up to last night’s post about burglaries targeting native Danes in Vollsmose, a culturally enriched neighborhood of Odense.

Many thanks to TB for the translation from B.T.:

A victim of the burglary smear campaign in Vollsmose 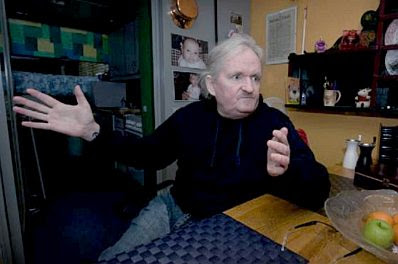 [Photo caption: Rene Larsen has lived in Vollsmose for more than 29 years. Now he has decided to move after having been exposed to both burglary and assault. (Photo: Sonny Monk Carlsen).]

Imagine living a life where you hardly dare open the door when someone knocks on it. A life where you have to change your route to get home in safety, and where the fear of being assaulted constantly fills your thoughts.

Then you know what it is like to be 55-year-old Rene Larsen in Vollsmose in the year 2012.

His voice trembles and fear illuminates the eyes of the middle-aged man in Vollsmose who just opened the door a crack when www.bt.dk knocked at it. In his right hand he conceals a shovel, which always lies next to the door in the event that he has to defend himself.

“Oh, you’re just reporters,” sounding like relief from the 55-year-old single disabled retiree Rene Larsen. He puts down his ‘weapon’ and invites us inside. Immediately he starts to talk about the life as a Dane in the troubled ghetto.

“I came here 29 years ago. At that time it was a fantastic place where everybody knew each other. People were friendly and invited one another inside. I remember that sometimes it could take several hours just to buy a package of bread in the local shop, as there was always someone you just had to talk to or drink a beer with,” he says.

But this is no longer the case.

“Well, It began about ten years ago when they started to shut down everything out here that was Danish. There is nothing left for us Danes. Today no one says hi to each other. You are almost looked down upon as a Dane, and you do not feel welcome anymore,” he says.

The atmosphere in the neighborhood has also become more brutal, a fact which Rene has experienced on several occasions.

“The first time I was assaulted was eight years ago. They broke my femur. Four months ago I was beaten up on a path while I was driving on my electric scooter. They stole all my money”.

Now Rene always takes different routes home on the scooter, and if anyone crosses his path, he turns around. “The attacks have not forced me out before now.” Like so many other ethnic Danes before him, he has been forced to live the same way.

“For the last ten years my children have said that I should move, but I’m probably a little stubborn. And I have so enjoyed the area out here,” says Rene.

The last joy finally disappeared a few weeks ago when Rene came home after having spent Christmas with his family.

“I came home on Christmas Eve. There had been a burglary. Gone were the television, my computer, and my Playstation. They had overturned everything. Even my hospital bed was overthrown.”

Rene, in shock, made his way back to his family again, but when he returned the next morning, he could see that the burglars had been there again.

“Now they had smashed more of my stuff, stolen my stereo and a half liter of cola.”.

That day Rene made a difficult decision.

“It annoys me endlessly that I have to live like this. My lights are always on. The music constantly plays, and the curtains are drawn. I always thinks about when they might come, and I have to open the door. So now I have decided to move. Its over.”

17 thoughts on ““There is Nothing Left for us Danes””