Sergei Bourachaga’s latest essay looks at the Shafia murder trial now underway in Ontario, and its relationship with the traditional and widespread Islamic practice of “honor killing”. 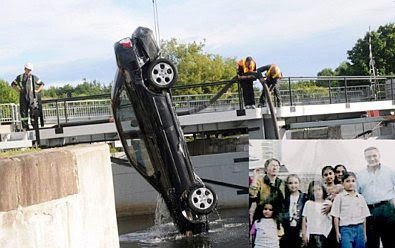 The Toronto Star, Islam, and the Inferior Status of Women

On December 1, 2011 The Toronto Star published an article titled “Leaders send a loud message: Domestic violence is un-Islamic”, written by Raveena Aulakh, an author with a vested interest in disseminating a significant amount of inaccurate statements designed to polish the badly tarnished reputation of Islam in Canada following the highly publicized “Shafia Trial”.

For those who are not familiar with this tragedy, the following brief explanation will help them understand the big picture. Currently three individuals, Mohammad Shafia (58), his second wife Tooba Mohammad Yahya (41), and their son Hamed Mohammad Shafia (20), are facing first-degree murder charges for the honour-killings of sisters Zainab (19), Sahar (17), and Geeti (13) Shafia, and the first wife, Rona Amir Mohammad (50), of the polygamist father Mohammad Shafia. To remain focused on the main points of my arguments, I will avoid going into the sordid details of the crime, but wiretaps submitted by the Crown as evidence during courtroom proceedings made it crystal clear, and beyond any reasonable doubt that the death sentence was imposed by the father on the four innocent women because “They betrayed us. They betrayed Islam. They betrayed everything…even if I am hoisted to the gallows, nothing is more important than our honour.”

The Star’s article places a heavy emphasis on the argument that “Islam does not condone domestic violence.” Several prominent leaders of Islamic organizations/associations are interviewed to elevate hypocrisy to a fine art and cover up the dark side of Islam, where the inferior status of women is well-highlighted in Koranic verses, scriptural texts from the Hadith, and the writings of Muslim theologians and scholars such as Sunan Abu Dawud, Sahih Al-Bukhari, and Sahih Muslim.

Domestic violence or violence against women is condoned and sanctioned in the following verse used frequently in the Arab world, during the rare legal proceedings launched to prosecute abusive husbands who maim and destroy physically and psychologically their wives:

Men have authority over women because Allah has made the one superior to the other, and because they spend their wealth to maintain them. Good women are obedient. They guard their unseen parts because Allah has guarded them. As for those from whom you fear disobedience, admonish them and send them to beds apart and beat them. Then if they obey you, take no further action against them. Allah is high supreme”. (Koran 4:34)

Women in Islamic countries are systematically brutalized and exposed to all kinds of degrading treatments by men even for a minor act of “disobedience”, such as questioning the validity of a decision taken by a husband who lacks the basic rudiments of logical reasoning. To avoid prosecution, it is enough for an abusive husband to invoke the previously mentioned Koranic verse 4:34, and several other sources from the Hadith, the following ones being the most frequently used justifications for the use of violence against Muslim women and the successful evasion of prosecution and punishment:

An average person with basic common sense may well argue at this point, that there is a considerable difference between using force to impose “obedience” according to Islamic standards of how an “obedient” Muslim woman should behave, and an escalation of violence that paves the way for the murder of a “disobedient” woman.

Islamic scholars who support the total subjugation of Muslim women to the edicts of Muslim men have always argued that the Prophet himself pointed out in the following text that women are defective in their reasoning capacity and their faith:

Because women have a very limited reasoning power, their observation of an event is unreliable. Thus in any situation where testimony is needed to reconstruct an event, an incident, or a crime, the testimony of a single women is unreliable unless another female witness can support the details of the story. But this biased standard is not applicable to men. A single man’s testimony is adequate to build a case against another person, especially a female person.

The Prophet’s assertion that women are inferior to men in their reasoning capacity and their faith solidified the old tribal patriarchal misconception that women with their bad judgment calls can easily trample the honour of a man and humiliate his family, tribe, and society. Of course what constitutes a violation of honour by a female person was never codified, and each and every cleric, theologian, scholar of Islam, tribal chief, or head of a family managed to instigate honour-killings for a variety of excuses ranging from minor trespasses to serious offences of adultery. Nowhere is the absurdity of stupid arguments mobilized against women and their potential to debase the honour of a Muslim society more obvious than in Saudi Arabia, and the controversial driving ban imposed on Saudi women. As part of a carefully orchestrated reform process, destined mainly for Western consumption, a few months ago King Abdullah showed a disposition to review the existing ban of women drivers in the Saudi Kingdom. He asked the Saudi Shura, a sort of a legislative assembly made up of ultra conservative religious figures, to consider a lift of the ban. On December 2, 2011, a prominent member of the Saudi Shura, Sheikh Kamal Subhi, contended via a venomous argument that lifting the ban and “letting women drive would increase prostitution, pornography, lesbianism and divorce… It will violate the Saudi society’s honour”. At this point it is not clear how far the King will go in opposing the Shura, but if and when the ban is lifted, Saudi women drivers will be bludgeoned to death in the streets for violating the honour of a society, and the criminals will not be prosecuted because they basically performed their religious duty of washing shame and dishonour with the blood of the culprits — women who simply wanted to be independent in meeting their transportation needs.

It is interesting and very ironic that the first statement of condemnation published in The Toronto Star’s article belongs to Samira Kanji, CEO of Noor Cultural Centre in Toronto. She stated proudly that the coordinated efforts of several Islamic cultural and religious organizations all across Canada are meant to be “… a call to action within the Muslim community… We want to make sure that no one can cite Islam as validation over horrific crimes or rights over anyone else.” The lip service paid by Mrs. Kanji to absolve Islam is built on a strong foundation of hypocrisy mixed with an ignorance that borders on stupidity. Despite the fact that the Centre has a Mosque where Muslims from the Middle East congregate for Friday prayers, she conveniently forgot, due to a medical problem known as “selective amnesia”, that almost every Arab country has exemptions in its criminal code for “honour-killings” and violence exercised by Muslim men against their wives, sisters, or disobedient close female relatives. All the exemptions in each and every criminal code of Arab countries “cite Islam as validation” and impose very trivial sentences on killers who murder women to save the honour of their family, society, and Islam. On the list of arguments made to support the Islamic honour code, Muslim lawmakers have promoted the following arguments:

“A woman is like an olive tree. When its branch catches woodworm, it has to be chopped off so that society stays clean and pure.”

“When a Muslim kills a woman to save his family’s honour, he simply carries out the death penalty the woman sentenced herself to by dishonouring the family.”

“La Yaslamou al sharafou rafiou min al aza illa iza sukibat ala jawanibihi al dimaou” an Arabic proverb frequently used in Middle Eastern courts roughly translated means “The only solution to save damaged honour is by spilling blood all over it”, in other words, slaughter the innocent women and let her drown in a pool of her own blood.

A concrete example where the above-mentioned statements were integrated into the penal code and the justice system of the country is Jordan. The Jordanian criminal code carries the following two well-known exemptions that drastically limit the ability of judges to impose harsh prison terms:

Article 98: He who commits a crime due to extreme anger caused by an illegal, and to some extent dangerous act, committed by a female victim benefits from reduced penalty.

Even the Western-educated monarch of Jordan, King Abdullah, has failed despite several honest attempts to change the existing laws governing “honour-killings” in Jordan: currently the stiffest penalty in Jordan for “honour-killing” is a maximum of two years. Needless to say Jordanian lawmakers recite Koranic verses to maintain the status quo, and upon release the pious Muslim who killed a hapless female receives a welcoming celebration reserved only for the heroes of Islam.

I hope Canadians in particular and Western democracies in general will understand why too many of us have no respect for a religion based on intolerance, demonization and dehumanization of every human being who rejected the desert bandit as his/her prophet and Islam as the perfect religion for the salvation of mankind.

9 thoughts on “The Toronto Star, Islam, and the Inferior Status of Women”