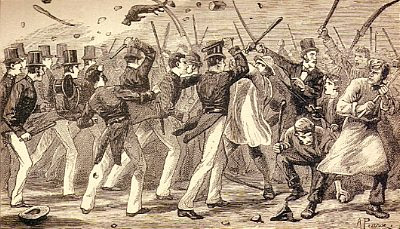 I hadn’t seen this news story before I wrote about the Teddy Bear and Candle Syndrome last night, but it certainly makes my point.

An unspeakable crime was committed on December 1 against a tiny baby in Gravesend, Kent. The community responded in the usual fashion, covering the pavement with candles and teddy bears, and gathering for a candlelight vigil last night. There’s no point in reposting the photos; they’re like all the others — go over to The Daily Mail to see them.

But the situation changed partway through the vigil, and the mood turned ugly. More atavistic instincts — evidence of a return to sanity — took over, brushing aside the teddy bears. According to The Mail:

One woman who took part in the vigil said: “We lit candles and were saying prayers but then someone shouted ‘let’s go and find the b******s who did this.”

The vigil turned into a mob. The crowd took off to find the suspected perpetrators, and did some damage to the house where they were thought to live.

This story makes an interesting case study, because as of this writing there is no word on whether cultural enrichment was involved. According to the demographic information on Gravesend, Sikhs are the second-largest ethnic group, and make up roughly 7% of the population. There’s no data on Muslims, however.

So all we can say is that the Teddy Bear and Candle Syndrome broke down, however briefly, in Gravesend last night.

The news article is so horrific that I’ve placed further excerpts from it below the jump. Readers who are sensitive to descriptions of extreme violence against small children may want to avoid reading this:

Police were last night forced to subdue a 100-strong angry mob who had gathered on a street where a one-month-old baby boy was allegedly raped and battered so badly his heart stopped.

The infant remained in a serious condition today after allegedly suffering multiple horrific injuries in Gravesend, Kent, in one of Britain’s worst cases of child abuse.

The boy’s horrendous injuries are said to include a broken arm, broken collarbone, punctured lungs and severe bruising, as well as having all his ribs fractured.

A group which initially gathered outside the house where the attack allegedly took place started a candlelit vigil, which soon led to damage as emotions ran high.

A man aged 35 and a woman aged 33 were arrested and released on police bail.

One of those involved in the vigil said they had gone to a house where they believed a man arrested in connection with the incident was staying with his family after he was released on police bail.

Those taking part said the group marched round to the house where it is thought the man arrested lived, before objects were thrown at the property and a car on the driveway damaged.

The little boy is currently on life support in hospital after suffering a heart attack.

He was last night said to be ‘showing signs of improvement’ after being transferred to a London hospital, but is not being named.

One woman who took part in the vigil said: ‘We lit candles and were saying prayers but then someone shouted ‘let’s go and find the b******s who did this.

‘They then stormed round to this other house in a nearby street and started throwing things at the house and damaging a car parked in the driveway.

‘The police have been there trying to bring it under control but people are very angry and feelings are running high.’

Kent Police today appealed for calm after the group of over 100 gathered for the vigil.

Superintendent Stuart Kehily said it had been a ‘highly-charged situation’ and community tension was running high.

He appealed for people not to seek retribution while police enquiries continued.

He said: ‘Kent Police takes all reports involving injuries to children extremely seriously, and specially trained officers are currently carrying out a number of enquires to establish the circumstances in this case.

‘I can understand the anger incidents like this can cause in the community, but I strongly warn people against jumping to early conclusions and seeking some form of retribution.

‘Once again I would urge people to remain calm and to let my officers carry out their investigation.’

12 thoughts on “From Teddy Bears to Brickbats”