The following post is the second installment of a three-part series adapted from Bob Smith’s work at Islam’s Fatal Flaw. 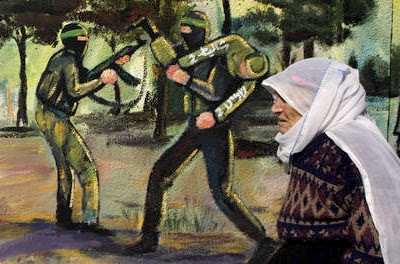 Islamic Fear by the numbers

Now let’s look at this European Islamic fear reality as described by Flemming Rose and see if it can help us understand the fear inside a nearly 100% Muslim society.

Keep in mind that Muslims make up less than 10% of Western European population. Yet, even when Muslims only represent this small percentage of the general population, the potential presence of Islamic killers has had the effect, according to, Flemming Rose, of creating “self-imposed limits on expression that seemed to be closing in tighter.”

Think of this reality. Western Europeans, who have grown up believing in free speech, living in their own free and open societies, are afraid to talk critically about Islam when Muslims make up less than 10% of the Western European population.

So now think of what it must be like inside a Muslim society where essentially 100% of the population is Muslim. The fear factor must be at least ten times greater.

This inability to speak critically about Islam inside Islamic society is one of the main reasons why Islam is stuck in its endless cycle of violence. Muslims can clearly see the violence surrounding them. But they know all too well, any critical discussion on the issue might draw the attention of a killer like Mohammed Bouyeri. As a result most Muslims live in fear of a system that keeps them quiet. Inside a system they have no control of.

So now we have a beginning idea of what the Islamic fear is, let’s move on and discuss who these Islamic killers are.

Who are the killers?

In order to start the discussion on the Islamic killers let’s look at a trait common to all religions. Religious believers come in all degrees of belief. Some are only marginal believers, and some are quite devout. For the sake of this discussion, let’s arrange a horizontal line called a “Belief Index” scale. On it, we can spread out the believers from least devout to most devout.

It goes like this: On the far left you have the least devout believers. Some of these have so little belief they might be considered secular. On the right side we find the most devout.

Let’s give the “belief index” scale numeric values from 1 to 10. Where 1 equals least devout and 10 equals most devout.

Islamic killers come from the ranks of Islam’s most devout believers. On the “belief index” scale these believers fall somewhere in the 9.75 to 10 range. These believers, under the right combination of facts and circumstances would be willing to commit violence in the name of Islam.

These most devout believers have been religiously trained to believe numerous calls to violence found within Islamic teachings. The Koran, Hadith, and Sunnah, the foundational base of Islam, all have numerous calls to violence. Additionally, Islamic scholars, the mullah infrastructure, fatwas and societal norms support violence in the name of Islam. Islam’s most devout believers accept as true that they have a God-given authority to commit violence for the benefit of Islam. (Just as Mr. Bouyeri stated above.)

In actual numbers these most devout believers — those willing to commit violence in the name of Islam — represent most likely somewhere between 1/10th of 1% and 10% of the general population. That is between one out of a thousand and one out of ten.

The Muslim population is presently about 1.3 billion. That means the number of potential killers ranges from as little as 1.3 million to as many as 130 million. Even at the lowest estimate, the 1.3 million killers becomes a huge threat. At 130 million the threat is hard to imagine.

This wide variation in the number of potential killers in the general population is due to a variety of factors. First, the majority of these killers never really “sign up” to be part of an Islamic force per se, so it is impossible to know how many there actually are. Additionally, most act out of a deep religious conviction that could change from day to day. Also, the structure of Islam has no central authority; so on any given day any devout believer might independently decide to fulfill his religious destiny. Furthermore, certain important Islamic issues (such as defending Islam from perceived threats — as in Iraq) might persuade a larger percentage of devout believers to fulfill their religious obligation.

To make matters worse, even though the numbers of these most devout believers — the ones willing to commit violence for Islam — might be limited, there is second group who augment and amplify the effect of these killers. These are the sympathizers and supporters of religious violence.

These sympathizers and supporters (8 to 9.75 on “belief index” chart) in reality act as the eyes and ears of the killers. Even though the sympathizers might not be willing to commit violence, they are willing to support it. They are also willing to talk about what they see. When the sympathizers and the most devout gather at the mosques or other social situations, they engage in small talk and conversation, which brings new data to the killer’s attention. This spreads the fear factor far and wide.

In sheer numbers, the combination of the sympathizers and the most devout most likely make up about 20% of the general Muslim population. That means about one out of five individuals is either a killer or a sympathizer. Because their identities are transparent or unknown, the sympathizers’ presence adds to the fear factor discussed above.

(Imagine being Muslim in this scenario. Each time you get together with five or more friends you could statistically be with one of these devout killers or sympathizers. Would you be willing to talk candidly about issues of religion unless you were really “sure” about your friends?)

Because of the Islamic principle of taqiyya (deception in the furtherance of Islam), Muslims for the most part refuse to acknowledge this “group” of killers. Furthermore, the killers would kill anyone who would shed light on or criticize them. Non-Muslims usually do not acknowledge these killers because of some combination of ignorance and political correctness. Additionally the veil of religious legitimacy given to Islam further confuses the issue.

These killers can be independent, unorganized individuals like Mohammed Bouyeri, the murderer of Theo Van Gogh in Amsterdam. These independent killers act like self-appointed “free agents”. Under Islamic law they are independently empowered to enforce Islamic sharia law. Because of their (1) “free agency”, (2) their ability to remain unnoticed until they act, (3) their even distribution within Islamic society, and (4) their sheer numbers, these “free agency” potential killers are responsible for the overwhelming majority of fear within Muslim society. When these “free agent’ killers do their work in the non-Muslim world, their actions are usually seen as criminal acts, unrelated to Islamic calls to violence.

Islam’s killers can also be organized into all sizes and types of groups — from two-man cells to large organizations like al-Qaeda, Islamic Jihad, Hamas, Hezbollah or other terrorist organizations. These groups can act independently or in conjunction with other groups or individuals. Their actions require no central authority but may be coordinated with other groups. Any independent “free agent” can start his own organization. Size and reach is only limited by the organizational skills of the individuals involved. Any and all of these groups can help or receive help from other groups. Muslim governments routinely provide clandestine support for many of these groups at the same time claiming these groups are “non-governmental actors.”

While most of the killers come from the extreme right side of the religious index chart, some of the less devout believers may succumb to what has been called “sudden jihad syndrome”. That is, under the right set of circumstances, they could be swayed to commit violence.

Islam’s killers can act anonymously. Like the killers who leave bombs in public places or the motorcyclist tossing a grenade into a crowd. Other killers proudly come out and do their work in public, like Mohammed Bouyeri, the killer of Van Gogh.

In Thailand Islamic killers decapitate schoolgirls and gun down plantation workers. In the Philippines they bomb markets and ferries. In Spain they bombed the transit system. In Jordan they bomb weddings and gun down college professors. In Egypt they shoot tourists at the pyramids and bomb hotels. They were the murderers of president Anwar Sadat.

In India the killers have hit Mumbai a number of times and make life miserable in Kashmir. In Africa, Islam’s killers worked in Kenya to set off bombs at the US embassy. In Sudan they are responsible for the killing in Darfur. In Lebanon and Gaza they launch missiles into Israel. In Argentina they bombed the Israeli embassy.

In Western Europe the killers work within the Muslim ghettos making sure that Muslims don’t leave the faith. In France they bomb the subways and helped incite the riots of 2006.

Even in the USA, Islamic killers do their work. Nidal Malik Hasan killed 13 and wounded 30 others at Fort Hood, and John Allen Muhammad shot ten people in the Washington DC area. In Salt Lake City Sulejmen Talovic killed five people in a shopping mall. In Seattle Naveed Afzal Haq killed one and wounded four. At the University of North Carolina in Chapel Hill, a recent graduate from Iran, Mohammed Reza Taheri-azar, drove his SUV into a crowd of students. In NJ six killers made plans to attack Fort Dix. (Note here. Conventional wisdom would have us believe these acts were all independent criminal acts. The reality is this. These acts were all part of what you should expect from Islam’s violent cyclical system.)

Any place on the face of the globe where you find Muslims you will also find Islam’s killers. Because these killers are relatively evenly dispersed throughout Islamic society, the more Muslims, the more killers.

The type of work these killers do depends on the percentage of Muslims in the society they are working in.

Inside Muslim society, their primary task is to keep Islam alive. They do this by killing anyone who:

(This is why Muslims seam so pious, don’t leave the faith and moderates don’t speak up.) Additionally in Muslim society their task is to enhance adherence to and enforce Islamic Sharia law. In Afghanistan the killers blow up girls schools to enforce their ideal of a true Islamic state. In Egypt they killed Anwar Sadat because he had gone against Islamic law by trying to make peace with Israel.

In those places where Islamic society comes into contact with non-Muslim society, as is the case now in Western Europe, one of their primary tasks is to make sure Muslims do not assimilate into their host society. (Again making sure that Islam is kept alive.) Their other tasks include terrorizing non-Muslims into conversion to Islam or acceptance of Islamic Sharia law. This terrorizing can take the form of criminal behavior or a constant low-grade guerilla war conflict. Examples of the latter are Kashmir, the Balkans, Thailand, the Philippines, sub-Saharan Africa, and now even Western Europe.

The killers are overwhelmingly young and male. Women have become a small number of recent killers. They come from all economic and educational strata. Poverty is not a cause, but does work to the advantage of devout believers looking for new “recruits”.

This system even finds a way to harness the destructive power of its young male social misfits. They can practice their destructive ways on non-Muslims in the form of rapes, muggings, and general mayhem and receive positive feedback from the most devout. This is why Western European jails have such a high percentage of Muslim inmates.

The sad reality about Islam’s killers is this; Because Islam establishes a continuous claim of religious legitimacy, Islam, as a system, can rely on a huge, unpaid, unseen, unorganized, individually acting, empowered to act, widely distributed group of highly motivated devout believers who are willing to kill in order to keep Islam the way it is.

Next: Part III, “The System”