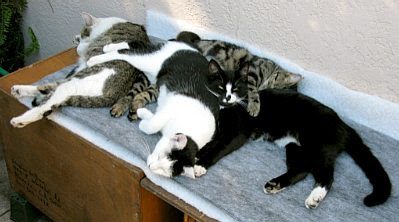 
Here we are again at the quarterly fundraiser. That cup you see is in hand for some spare flour, a few beans from the bag, perhaps an extra egg or two. The usual “whatever you can spare would be appreciated”.

It’s darn hard to beg for a living, though in some ways I’ve come to look forward to our blegs. For one thing, during the week or so prior to the fundraiser we spend time contemplating the previous months in search of a theme, a thread in the tapestry. Though the goal is always the same — i.e., raising enough money to extend our work for yet another quarter — each fundraiser week arrives with its own personality in place. Sometimes events overtake the original idea, but for the most part each day adds to or changes the original notion.

This time, we’ve been talking to one another and reading about community, especially the restorative, creative kinds of shared experience that carve out our place in a given group. We lament the old days, before the ready-made communities collapsed, even as we look forward to seeing what will evolve to take their place.

The zeitgeist is percolating with the same themes and questions. As our decline sets in, we turn to one another to ask, in myriad ways, what it takes for survival. Our response often depends on whatever we’re facing at the moment.

Someone has come up with the Rule of Three. The version I found here is somewhat expanded from the original (which contained three components) but still works. Please, for all the literalists in the crowd: remember the purpose of this mnemonic device, which is to help us cement into place the importance of each essential.

The Rule of Three says we can survive this long:

*[the source for that one is at the link]

Hmmm… I wonder if the last essential is at all connected to our decision to fund-raise at three-month intervals? When we set off on this adventure (I mean in Gates of Vienna’s second phase, i.e., after the Baron lost his job and just as the network with Europeans was increasing. The first phase was more avocational than it became in Phase II), we were advised to fund-raise every month. However, such a short interval wasn’t suited to our temperaments. Thus, three months has come to have a Goldilocks’ just-right feel (well, except for those three-month intervals of sending in our self-employment tax payment to Uncle Sam).

To recall the summer bleg is to bring back the shadow of the massacre in Oslo, of the scapegoating of Fjordman, of the strange events like our earthquake and the hurricane which brushed past us on the way north. That week really did feel like survival time, at least in retrospect. 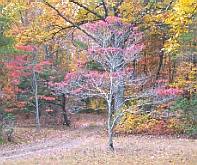 Now, having flown past the tag ends of summer — green tomatoes retrieved from the garden at last — and the better part of Autumn’s glorious colors all but gone, here we are in the “bare ruined choirs” of mid-November. Really, though, Shakespeare should have noted the way oaks in particular cling to their leaves well past the vestiges of reasonable Autumn. With every passing bluster they persist in rattling those dried clusters as if the year were not winding down.

So we arrive at our theme for this week, one we retrieved after a rummage through our communal clue bag to find whichever idea seems to be weaving its way through our thoughts, our conversations, our reading, and our vague, passing dreams. We want to talk about community in its various forms. What works and what doesn’t. What needs to be retrieved (if that can be done), what needs to be let go…there is a time in every season.

Online communities have their own reality. So many readers tell us they turn to Gates of Vienna first… or second, or third. Sometimes daily, sometimes a rush of catching-up on the weekend. Our community here is literally worldwide (if you don’t count China. The firewall Google installed probably had Gates of Vienna on the no-go list? And Turkey blocks us, too, or so we hear.). Thank heavens for translators who command two (or more) languages! In this community, there isn’t much emphasis on current events. Probably there would be if I were in good health. I would at least be examining the artificial community of the Occupiers — perhaps it’s just as well I can’t do that?

For me and the Baron, one advantage to living and working together so closely is the opportunity to indulge at length in questions surrounding (and arising from) the inherent human need for some kind of belonging. I often think of the person in Berkeley, California who wrote in anguish about the necessity to maintain his real identity as a conservative for fear of losing his job and his friends. Gates of Vienna was a partial substitute for him, but the unhappiness of having to survive in an intellectual and social “underground” was taking its toll.

So: we are all friends in need though our needs may differ on the surface. Again, our need of sufficient funds (ah, if only the rumor we are funded by Mossad were true!) brings us to your door, cup in hand. We are friends in need… think of us as your brother-in-law, but at least we’re not sleeping on your couch.

This week I hope you’ll be entertained and pleased to read the daily endorsements we’ve lined up from among our distinguished friends — people whose work we admire and to whom we openly begged for an endorsement for this quarter’s appeal. Their words are inspiring and hopeful.

Wish us luck, leave a tip, and join us in this week’s journey.

3 thoughts on “Friends in Need”