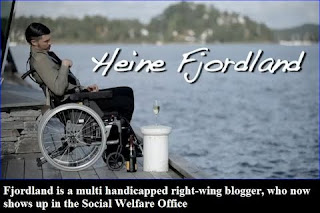 “Heine Fjordland”, as you may remember, is the Norwegian state broadcaster’s idea of a joke. He is NRK’s depiction of a right-wing Norwegian blogger — obviously intended to parody Fjordman — as a Nazi paraplegic in a wheelchair who types his diatribes with a stick held in his mouth.

In one of his responses to media attacks, Fjordman pointed out how insulting the “Fjordland” satire was to handicapped people. He found it a surprising move by the state broadcaster, considering how hyper-PC the Norwegian media are. But Norwegian media analysts don’t agree with his assessment. Their analysis of the semiotics of the Nazi paraplegic finds him not at all insulting to any protected group.

Here’s Kitman’s summary of a report on the topic from Dagbladet:

The writer Jan Grue recently criticized the “Fjordland” character in an article. Not because it mocked a blogger persecuted for his political views, of course, but because it indirectly mocks the multi-handicapped and thus “equates inner evil with outer shortcomings”.

Now Inger Merete Hobbelstad has taken it upon herself to defend the Fjordland character. In her analysis she delves into the “deeper meaning” it supposedly carries.

She says, “Fjordland is a parody combining Third Reich uniforms with a fertile abundance of physical handicaps. A character who airs his rage against society with the help of the mouth-stick he needs for typing, all the while being kept warm by the cozy fire supplied by the welfare state… the multi-handicaps are not the defining trait of Heine Fjordland; they must be understood metaphorically.

“Fjordland bites viciously at the hand that feeds him. The essential thing is the inner realm, the hatefulness.”

She further argues that “The Fjordland character says nothing about the public broadcaster’s attitude towards the multi-handicapped…” Lars Ødegård, the general secretary of the Organisation of the Disabled in Norway, views the program the same way. He perceives the character as mocking intolerant opinions, not users of wheelchairs. When asked about it he said, “We [the handicapped] are proud to be able to contribute as a group”…