It’s also a good place to go for commodity prices and news about the commodities markets. See this page for information on metals. Who knew there was something called “peak metals”? They also have a report entitled “Afghanistan — Newly Discovered Mineralogical Treasure House (Again)” that is worth reading. (Dymphna wrote about this a year or so back, but it turned out to be not-so-new “news”. Entrepreneurs have learned the futility of working with a government whose grasp of the rules of law and property are sketchy at best.)

A number of our readers will find the site useful. Gates of Vienna followers who work in the PNG (pressurized natural gas) field tell us that they’re busy retrofitting vehicles for businesses dependent on cheap fuel supplies — say Federal Express or UPS. It’s an exciting field — again, because America remains under the rule of law… for the most part.

The guest essay below was submitted by John C.K. Daly of Oilprice.com. It tracks the efforts to raise North Africa’s profile in supplying solar energy to parts of Europe.

I hope readers enjoy this post on North Africa’s chance to partner with Europe. Any connection has the chance to bring with it hopes for incremental change within totalitarian systems. Those increments will be quite small, but better than nothing.

[Before you ask: No, we received no payment for posting this essay. Oil Price.com is simply a site that Dymphna likes to visit for its information on commodities and energy. She also corresponds with its editors, and subscribes to its daily email alerts.] 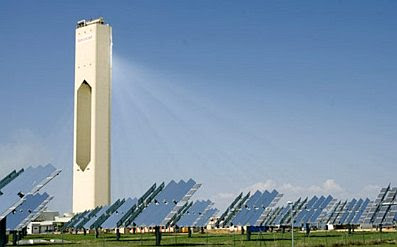 Europe may be beset with fiscal issues regarding the decline of the euro and Greece’s potential default, but it is nevertheless proceeding with an ambitious plan to generate electricity with solar power in North Africa to be transferred via high-voltage lines across the Mediterranean.

If all goes according to plan, the $550 billion Desertec Industrial Initiative could eventually supply 15 to 20 percent of Europe’s electrical requirements. The Desertec Industrial Initiative proposal would interweave a system of mirrored solar power systems, photovoltaic arrays and wind parks, spread over Northern Africa desert regions like the Sahara.

On 2 November in Cairo the Desertec Industrial Initiative German-led consortium stated that for the first phase of the project in Morocco, “all systems are go.”

As North Africa’s solar radiation is far more intense than Europe’s, the Desertec Industrial Initiative project’s solar photovoltaic panels could generate up to 300 percent of that provided by similar installations in northern Europe. Officials in Brussels are falling all over themselves with praise for the project. European Commission Institute for Energy official Arnulf Jaeger-Walden observed that only 0.3 percent of the sunlight illuminating the Sahara and other Middle Eastern deserts could meet all of Europe’s electrical energy needs. Dr. Gerhard Knies, coordinator of the Trans-Mediterranean Renewable Energy Cooperation, which originally developed the Desertec Industrial Initiative proposal said, “Within six hours deserts receive more energy from the sun than humankind consumes within a year.”

One of the Desertec Industrial Initiative’s most fervent supporters is Germany, which earlier this year decided to shutter its nuclear power plants by 2022, which currently provide 28 percent of the country’s power, leaving Berlin scrambling for alternatives. German Federal Ministry for Economics and Technology official Jochen Homann said in Cairo, “Desertec opened up an opportunity for us. We want to enter the age of renewables with sustainable sources of electricity supplying 80 percent of our power generation by 2050… Germany’s government will continue to support Desertec. It’s an inspiring vision which is good for foreign, climate and economic policies.”

Desertec Industrial Initiative managing director Paul van Son discussed in a recent interview the political turmoil roiling North Africa since the beginning of the year and said, “It’s a positive thing. We like the Arab Spring because it has opened up a lot of ideas and generated support for the project. We’re very supportive. The democratic structures fit very well with ours.” Van Son added that the first phase of the Desertec Industrial Initiative project will begin in early 2012 with the construction of a $2.8 billion, 2.5-square-mile solar farm near the Moroccan desert city of Ouarzazate, which will utilize parabolic mirrors to fire steam boilers will drive turbines in a 500 megawatt pilot power plant. The projected construction time for the Ouarzazate facility is two to four years; the plant is projected to come online producing electricity by 2016.

Civil unrest in Libya? No problem, according to van Son, who observed, “Desertec is a project they’re understanding better and embrace. I believe large infrastructure projects like this can contribute to stability. It’s about the development of new industries in the region, investment, job creation and the transfer of knowledge and know-how.”

What about Europeans in the chilly northern part of the country, where sunlight is far less intense than around the sunny Mediterranean? Well, last December the governments of the UK, Ireland, Belgium, Denmark, France, Germany, Luxembourg, the Netherlands, Norway and Sweden, all bordering the North Sea, signed a memorandum of understanding about constructing of a new offshore electricity grid that will link countries across Europe and make it much easier for member states to trade energy. The proposed electrical super-grid will utilize power generated by the 140 gigawatt offshore wind farm currently being planned for the North Sea.

Leaving aside issues such as massive poverty, civil unrest and terrorism in North Africa, one must admit that the project has an alluring, environmentally friendly seductive appeal.

Where is the $591.3 billion for the two combined projects to come from? Saving Greece for the eurozone is projected to cost $180 billion in assistance, and the Spanish and Italian economies are looking decidedly wobbly. Does the European Union really have $591.3 billion to spare in such circumstances, with the jobless rate for youth at 46 percent in Spain, 43 percent in Greece, 32 percent in Ireland and 27 percent in Italy?

If not, then they can always ask Beijing, as the $591.3 billion is slightly less than 60 percent of the reported $1 trillion the European Union is reportedly readying to ask China to contribute to shoring up its economy.

As for solar panels and mirrors in the Sahara to keep Europeans’ lights on, one hopes it won’t turn out to be just another mirage.

Oilprice.com is one of the leading energy news sites online. They publish on average 10 articles per day covering the latest news and opinion from the energy world. They also have detailed crude oil price charts and other commodity listings. To see more of their work please visit oilprice.com