This is the fifth of an eight-part history of the Transatlantic Counterjihad. Links to the first four parts are at the bottom of this post.

Many thanks to the Counterjihad Collective for all its hard work on this project.

Beginning in 2008, the Transatlantic Counterjihad has developed a streamlined system for the translation of texts and the subtitling of videos. The process we use has been dubbed the “Rosetta Stone Project”, in honor of the famous ancient Egyptian stele deciphered by Jean-François Champollion in 1822. 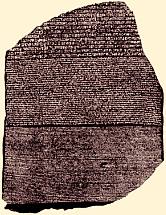 When an important article, essay, or speech is published, a move is initiated among the various Counterjihad groups to have it translated into as many languages as possible. The influence of the text can be greatly extended if it is spread in multiple languages, and gives the author a much wider audience.

If the text is needed for subtitling a video, the propagation of the resulting translations can multiply the impact of the original version far past its initial range. Generally speaking, the typical Internet user prefers videos over articles, and YouTube is particularly effective at the “viral” spread of video-based ideas.

The importance of any text or video is determined by reader responses. When a critical threshold is reached — say, requests for seven different languages — it triggers the convening of the Rosetta Stone Group, and word goes out to volunteer translators that their help is needed. Multiple translators are potentially available for all the major European languages, which increases the likelihood for a quick turnaround in any given project.

Rosetta Stone projects in the past have included Geert Wilders’ movie Fitna, several of Mr. Wilders’ speeches, Col. Allen West’s speech at the Freedom Defense Initiative in Washington D.C., one of Pat Condell’s videos, and the videos of Ann Barnhardt burning the Koran (see detailed list below).

After the translated texts and/or subtitled videos have been made available, their distribution is coordinated via a “ring” of Counterjihad websites: Europe News, Gates of Vienna, ICLA, Politically Incorrect, Snaphanen, Tundra Tabloids, Uriasposten, Vlad Tepes, and other news sites and blogs. By mirroring these important posts at multiple sites in Europe, Canada, and the United States, their reach has been greatly extended. Many thousands of readers or viewers are thus able to access Counterjihad material — the kind of material that their own media outlets rarely feature — in dozens of different countries.

Speech given on February 19, 2010, at the launch of the Freedom Defense Initiative, organized by Pamela Geller and Robert Spencer.

Speech on March 5, House of Lords, showing of Fitna

Next: Part V, Official Opposition to the Transatlantic Counterjihad

2 thoughts on “A Brief History of the Transatlantic Counterjihad, Part IV”