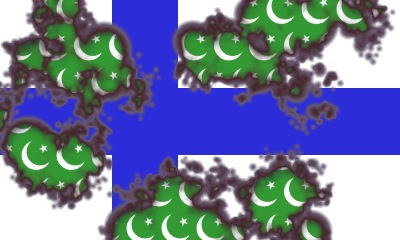 For many years Sweden was far ahead of Finland in its embrace of the joys of cultural enrichment. The Swedes were actively importing massive numbers of Third World immigrants — especially Muslims — decades before the Finns began. However, in recent years Finland’s ruling class has decided to catch up with Sweden and other multicultural utopias in Europe. Nowadays the benefits of mass immigration are relentlessly touted to Finish citizens.

Those who resist are being demonized as — you guessed it — “racists”. Like Sweden, Denmark, the Netherlands, Britain, France, Austria, Switzerland, Australia, and Canada, Finland has passed laws against “incitement against a religious or ethnic group”. The Finnish oligarchs are now using these legal means to ensure that their citizens accept their multicultural fate — or else.

The Finnish blogger Vasarahammer posted the following guest-essay at Tundra Tabloids about the increasingly totalitarian tactics employed against one particularly “racist” town in the north of Finland.

The Norwegian blogger Fjordman has sometimes described Sweden as softly totalitarian politically correct tyranny, meaning that dissidents who step out of line are punished by social exclusion or, at worst, by losing their job. However, there is no direct persecution by the state like in the Soviet bloc during the Cold War. Dissidents are neither sentenced to forced labor nor committed to mental hospitals like they used to be in the Soviet Union.

The Swedish way of controlling dissent is subtle. It does not rely on the state to carry out the actual punishment, but the media and the government organizations perform the task without resorting to force. In some cases, though, the self-styled anti-fascists do intimidate the opponents of the state ideology, but the state is not directly involved in the attempt to force the representatives of dissident political organizations to cease their activities.

It can be argued that the Swedes have had decades to fine-tune their methods of marginalizing dissent and keeping matters related to immigration outside of mainstream political discussion. Finland, on the other hand, still tries to learn the methods of controlling dissent, since the Finnish multicultural project began as late as in the early 1990s, when the arrival of Somalis from the Soviet Union spelled the end of the strict Finnish immigration policy of earlier decades.

Since then the Finnish authorities have tried to combat racism in different ways that are very familiar to everyone living in a politically correct society. The crude propaganda highlighting the positive aspects of multiculturalism is matched with demonization of racists, meaning those who do not embrace the multicultural project with adequate enthusiasm.

The Finnish way also relies more heavily on courts and law enforcement as a tool to suppress racist thought. This can be seen clearly in the case of Lieksa below, as well as in the several court cases in which internet bloggers have been convicted of incitement to ethnic hatred.

The town of Lieksa located near the eastern border of Finland is famed for its natural beauty and the landscapes of Lake Pielinen. However, recently the town hit the headlines in Finnish media with allegations of racism.

Lieksa is a fairly typical town in the remote parts of Finland. The population is aging and the young people are moving out to the big cities in the southern part of the country to escape the high unemployment.

Lieksa has also had a high availability of empty municipally-owned flats. The political leaders of the town decided that by giving the flats to the asylum seekers from the nearby Kontiolahti asylum-seeker reception center they would solve the problem of empty flats. So two hundred asylum-seekers, mainly from Somalia and Iraq, were given municipal flats and got to stay in Lieksa mostly living on social security benefits.

Some local politicians openly questioned the long-term financial viability of the plan. They saw that asylum seekers would become a permanent drain on the municipal economy. It was then that the campaign against Lieksa was started. The main regional newspaper Karjalainen published several articles highlighting the racism in Lieksa and how it spoils the reputation of the town. The paper was backed by the chief of North Karelian police Kai Markkula who stated:

“What distinguishes Lieksa from Joensuu is the fact that negative attitudes towards immigrants are a lot stronger and visible in all social groups.”

Joensuu is the main city in the North Karelian region and had problems with skinhead violence in the 1990s. Those events were said to have spoiled the reputation of Joensuu, since they received a lot of media coverage at the time. In his statement Markkula implies that the local politicians in Lieksa are also responsible for the negative attitudes, not only the local youths. It must also be noted that the local politicians who have criticized the reception of asylum seekers are not members of the Finns party but Social Democrats and Center Party members.

By comparing the current situation in Lieksa to the events in Joensuu the chief of police is trying to stop the complaints about asylum seekers and make people of Lieksa accept the new multicultural reality.

This did not happen. Instead, some local young people from Lieksa launched a racist Facebook group, which did, in fact, contain some fairly unpleasant postings, most of which have been removed by now. The group attracted the attention of national media and the North Karelian police were forced to act. The police arrested nine people suspected of incitement of ethnic hatred, two of them with gross incitement of ethnic hatred, a new crime recently introduced to the Finnish law that carries the maximum penalty of four years imprisonment.

The police said that those arrested were between 15 and 51 years of age. One of the suspects was a 15-year-old girl. It must be noted that the suspects were taken into police custody solely because of the posts in the Facebook group. The suspects were not accused of actual violence or planning of specific violent acts.

The North Karelian police were supported by the Chief police officer of Finland Mikko Paatero who congratulated them for the job well done. It is not yet clear whether the perpetrators of the Facebook crime will be prosecuted and on what grounds. However, the police did their best to intimidate the racists of Lieksa.

The Finnish Foreign Ministry recently published a report about the implementation of the international convention on the elimination of all forms of racial discrimination. In that report, the following was stated:

Following the Norwegian example, Finnish police have launched a website that allows people to report racist content in the internet. Using that site anyone can turn in any website that the informer thinks is against the law. It is also possible to report anonymously.

According to the Finnish police, there have been 1028 tips on racism in 2010, out of which 22 led to measures. What is interesting in the statement above is the fact that the police are actively fighting against criticism of immigration as such. It is not just those who plan to carry out violent acts that are targeted by the police but also people expressing their opinion about immigration.

Meanwhile the crude propaganda advertising the benefits of immigration from countries like Somalia goes on. Newspaper Karjalainen published an op-ed, in which the paper expressed concern about able pairs of hands. According to Karjalainen, Finland needs immigration:

“The most attention to the job opportunities available for immigrants should be paid in Lieksa, in which the population is aging faster than average and the need for able pairs of hands is high.”

In the article Karjalainen is promoting the official lie saying that immigrants from Somalia and Iraq will rescue Finnish society from the impending labor shortage. This lie is repeated over and over again, even thought the fact remains that roughly ten per cent of Somalis work for a living and few have skills most needed in contemporary Western society.

Recently Finnish anti-racists have tried to borrow expertise from Sweden. Far-left anti-racist Lisa Bjurwald’s recent book about the European far right was published in Finnish recently. Bjurwald has allegedly monitored Finnish politics after the electoral success of the True Finns party. According to Bjurwald, the Sweden Democrats would not be stupid enough to express openly racist and homophobic statements like some representatives of the True Finns party have done.

There is an element of shame in supporting the Sweden Democrats openly. In addition, the support may turn out to be physically dangerous. However, such an element does not exist for the True Finns party. The conformism and the need to maintain a politically correct facade are part of Swedish society, but not so much in Finland. That is why Bjurwald’s flawed analysis, which is not based on actual understanding of Finnish politics but moral narcissism, will not benefit the Finnish anti-racists. That is why, they will have to rely on the law enforcement to do their bidding in the future as well.

8 thoughts on “Intimidating the “Racists” of Lieksa”