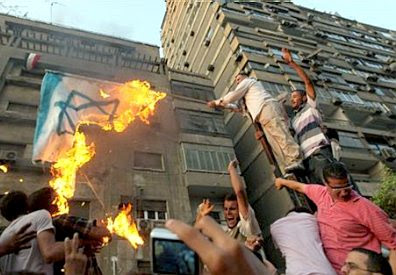 After a protest today at Tahrir Square in Cairo, demonstrators converged on the Israeli embassy and tore down a protective concrete wall that had recently been built by the Egyptian authorities. The mob burned an Israeli flag, and knocked down the wall with hammers and a broken-off lamp post.

The latest reports say the embassy staff evacuated safely and are now either at the airport or en route to Tel Aviv.

CAIRO (Reuters) – Egyptian activists demolished a wall around the Israeli embassy in Cairo Friday after thousands demonstrated at Tahrir Square to push for a timetable for transition to democracy and an end to military trials for civilians.

After Friday prayers, thousands had converged on Tahrir Square, the epicenter of the protests that toppled Mubarak, for what was billed as “Correcting the Path” protests.

Some of the demonstrators later marched to the other side of the Nile in Giza, where they used hammers and large metal rods to destroy the wall, erected this month by Egyptian authorities after daily protests over the killing of five Egyptian border guards in Sinai.

Egyptian police stood aside as activists tore down the concrete wall to the cheers of hundreds of demonstrators.

“It is great that Egyptians say they will do something and actually do it,” Egyptian film director and activist Khaled Youssef said, standing among the protesters outside the embassy.

“They said they will demolish the wall and they did … the military council has to abide by the demands of the Egyptian people,” he said.

And some more recent information from Ynet News:

Hundreds of Egyptian activists on Friday demolished parts of the wall erected around a building housing the Israeli embassy in Cairo to protect it against demonstrators.

Israeli officials stated that the Egyptian protesters broke into the building and managed to reach the floor on which the embassy is located. However, they have not managed to break in through the fortified doors.

Sources in Jerusalem called the incident a “grave event,” and noted that it is still unclear whether the Egyptian security officers who guard the building fled the scene.

Al-Jazeera network reported that the Egyptian army is using tear gas canisters in order to disperse the crowds.

According to eyewitnesses, crowds climbed the embassy security wall, pummeled it with hammers and tore away large sections of the barrier, which Egyptian authorities erected after daily protests last month sparked by tensions over the death of five Egyptian security personnel in Sinai which Cairo blamed on Israel.

The attempt to demolish the wall came after an Egyptian Facebook group called activists to gather outside the Israeli delegation in Cairo and “urinate on the wall.”