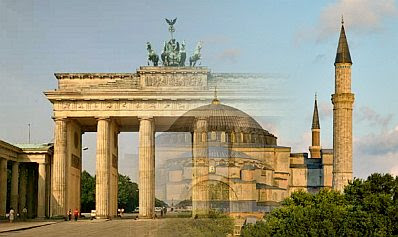 The process of Islamization is not uniform across the European continent. In each country, Muslim immigrants traditionally come from certain regions, even from specific countries.

For example, the Netherlands is being Moroccanized. Britain is being Pakistanized. France is being Algerianized.

And Germany and Austria are being Turkicized.

This process of turning Germany into Turkey is deliberate, and the plans of ethnic Turks in Germany are no secret. German Turks suffer no consequences for expressing their intention to take over, so they can state their goal openly. They know they will not be charged with sedition, nor even censured.

The mainstream media largely ignore such blatant supremacist agitation, preferring instead to parrot the usual nonsense about “integration”. But Politically Incorrect is paying attention.

Many thanks to JLH for translating this article from PI:

I Have a Dream — Deutschland Will Become Turkland

Özgür Ümit Aras is an ethnic Turkish German citizen who is openly living in Berlin and, as he says in Facebook, would like to become a Bundestag representative in 2013. Özgür also writes articles, for example for turkishpress. An especially illuminating piece on August 19th is entitled “I have a dream. A freely independent Turkland.” He seems not to have had sufficient instruction in German, but mastery of the language is probably not necessary for taking over this country.

Turkish megalomania, a nationalistic drive for great power status and an Islamic-based claim to power seem to be joined in an unhealthy way in this article. And an extremely hostile attitude to the German state, its society and its citizens is expressed.

We are now 8 million, over 10% of the society and the battle goes on but now with an intellectual head as leadership central — against everyone, especially against the oppression, against the lies of the German state, the lies of the rightist populist forces, against this despicable Nazi pack — our goal can only be achieved with great patience.

In my dream, I saw a new elite of 7 million highly educated Muslims: professors, Ph.D.s, lawyers, officials, technicians, masters and apprentices, engineers, architects, doctors, politicians, teachers, athletes and many more. I saw people who used their monstrous potential and organized, through social networks, through their professions and their social surroundings.

The first step toward Turkland is the task of educating our children ourselves instead of putting them into the hands of a state based on oppression. What an absurd thought, like entrusting your animals to a butcher or leaving your greatest treasure to deceivers and thieves. If they have their way, you have to be as stupid as possible and living on the edge, so that you can be enslaved for another 50 years and in the end say thank you for German feudal overlordship so you can practice making a grandiose, royal bow to them.

It is important to organize, firm up your contacts to a solid footing and stay true to your line. We must begin to found Turkish secondary schools, with ethnic Turkish teachers, Turkish must become a recognized language, admissible for graduation, like German or Italian or Spanish. More than 200 million people speak Turkish worldwide. I saw how we rammed an elite out of the ground, cultivated, responsible, highly educated and living close together. We must realize our dream of Turkland in Germanland, by our men not being afraid to approach German women, going along with their desires, taking them as wives to bear many new children for Turkland and renew the society from below for maximally 2 generations, We will lay out for them our manifold cultural offering and give them a glimpse into our intimate togetherness. We will win them for ourselves, for life.

All the important positions in society. all the leading posts, we must take over anew. We must be the best in what we do. We must function together as a people, a great collective. We must not forget that we are still the minority in Germany.

It can no longer be accepted that we are oppressed, subordinated to their wishes and ideas. Let us found a Turkish educational fund and all of us pay in a month’s wages to build Turkish schools, universities and kindergartens.

We will create a better Turkland in Germanland, to show our independence to the European tribunal and assert the necessity of this development. To have our acceptance of our independence and right of self-rule recognized at a European level. This is a legitimate struggle — the naturally given rights of self-rule, self-determination, individual fulfillment and development.

Our closely settled friends will buy properties, step by step, house on house, until it becomes a precinct, until we are in control of a city. We will fill all the co-ordinating points with Turkish officials, occupy hospitals, police, military, technical emergency services and the highest political offices, like mayor — then nothing more will stand the way of the independent stage of Turkland.

Özgür’s takeover vision seems unrealistic right now. But the clock of demographic development is ticking inexorably. So in a few decades, when the birth jihad has successfully concluded, this horror show could be realized. It is known from various similar formulations of ethnic Turkish politicians that these ideas are not only in the brain of a Özgür Ümit Aras. For instance, the legendary von Vural Öger, who would now like to use the strong ethnic Turkish men and healthy women to complete the failed Ottoman invasions of the 15th and 17th centuries, so to speak. from the inside. Heart-stopping too, are the comments of the Milli Görus Politician Necmettin Erbakan; “Europeans believe that Muslims only came to Europe to earn money. But Allah has other plans. […] We will surely come to power. Whether this happens with bloodshed or not, is undecided.”

Similar remarks by their compatriots are heard again and again on the street: “In some years we will take over this land.”

Along this path, there is constant demanding and complaining, in order to effect the demands more efficiently. For example, from the Turkish embassy in Berlin which regards its fellow Turks in Germany as being discriminated against. In Turkey, on the other hand, in the course of re-Islamization, according to an article in the Tagesspiegel of August 10, there are some mind games with the idea of creating ghettos for infidels. How tolerant and merciful Islam is in its home countries. Erdogan already sees his Turkey as a world power, which is attempting to exert massive political and social influence over its emigrants everywhere in Europe, as we know since his megalomaniac speech in February of last year in Istanbul. Germany apparently is on its way to a hostile takeover.

What can you expect from a Brown organization like Political Idiocy News. Some may ask why the color brown. I have figured it out, because it is a pile of stinking s***. We will see how long it takes people to realize that the analogy is no coincidence.

PS 2; In the article, Wet Turkish Dreams of Turkland, “unzensuriert.at” reports that turkishpress is run by an organization called “Generation Future, [registered]” with a headquarters in Germany. Özgür Ümit Aras is said to be feature editor with turkishpress. “unzensuriert.at” also indicates the area of commentary, where exciting things can be read:

The heated discussion in commentaries shows that more than a few are serious. The poster, “German by Coercion” goes on record that he has already founded the “Turkish Army Faction” and registered it on Facebook — “IN CASE A LEADERSHIP TEAM IS NEEDED.” The commentator’s professional photo shows the Norwegian terrorist Anders Behring Breivik at the reconstruction of the crime on the island Utoya.

This entry “German by Coercion” appeared at 3:46 PM on August 21 with the following text:

I HAVE ALSO FOUNDED THE TURKISH ARMY FACTION (TAF on Facebook), FOR THE POSSIBILITY THAT A LEADERSHIP GROUP WILL BE NEEDED…AT WHAT POINT CAN AN ETHNIC GROUP CLAIM LIVING SPACE FOR ITSELF WHERE IT HAS IMMIGRATED? CAN SOMEONE TELL ME THAT? Take the Europeans as example — they took just 250 years…from the first mass migration to the declaration of independence…or Australia, that took 250 years (1600-1850) to declare the land their own…South Africa needed a similar time span to be seen as the “possession” of the immigrants…can we accept 250 years as a time span for a soft occupation??…I would like to hear that from you…because then I will have to prepare my grandchildren for protecting and defending their coming homeland…

PS 3: In YouTube you can see the video, “Bozkurt will win! Germany lose!”* where presumably the Grey Wolves indicate that the Turks have built Germany up and will soon take over.