Update: The number of languages into which Fjordman’s writings have been translated now stands at eleven. I am told that extensive Spanish translations are available at Paz-digital.org.

“The European Union is the principal motor behind the Islamization of Europe. It is formally surrendering an entire continent to Islam while destroying established national cultures, and is prepared to harass those who disagree with this policy.

“This is the greatest organized betrayal in Western history.”

The above quote from Fjordman is dismayingly appropriate to his current situation. He has been demonized in the media and forced into the public spotlight. Now he does not know whom to fear more, his own government or the combined forces of the Islamic zealots and “anti-fascists”. It’s no wonder he decided to quit blogging and go into hiding.

But if you think the fury raging around Fjordman is due to his prominent place in Anders Behring Breivik’s manifesto, think again. The Oslo psychopath was the ostensible cause, but the real reason will be found in the quote featured at the top of this post, and in the hundreds of thousands of additional words that the “Dark Prophet of Norway” has written over the past five years about the destruction of European civilization and culture.

The Powers That Be want Fjordman out of the picture, and the killings in Norway provided a convenient pretext to take him down.

We’re fortunate that Fjordman has already written so much, and that his works have been mirrored in so many places, and translated into so many languages. At least eleven languages so far — Swedish, Finnish, German, Dutch, French, Italian, Spanish, Polish, Czech, Russian, and Croatian — and those are just the ones I know about. He may be the most widely-read writer of Counterjihad samizdat the world has ever seen.

Fjordman has been temporarily knocked off the air, but he hasn’t been silenced. He can’t be silenced — his voice is still out there, speaking to anyone who cares to listen. He will continue to speak to the anti-Islamization resistance as long as there are people willing to copy his works and pass them along.

I confer regularly on skype with several different European bloggers and activists, and Friday July 22 was no different than any other day. For a while that morning (it was afternoon in Europe) the conversation proceeded normally — people left links to news items, summaries of television reports, and odds and ends of other news.

Then, at about 9:40am EDT, Fjordman suddenly broke in and said, “There has just been a VERY powerful explosion in central Oslo. I heard it myself. Just outside of a central government building…” Later he told us, “I was many kilometers away at the time, and I thought lightning had struck somewhere in my local neighborhood.”

At that point we moved into live-blogging. Those who understood Norwegian monitored the news online or on TV, and I collected their reports, organized them, edited them, and posted the results at Gates of Vienna as quickly as possible.

From then on the news went up as it came in, according to our long-established habit when live-blogging a momentous event. Interested readers may want to look in the archives for that long and frequently-updated post to see how events unfolded throughout that dreadful day.

Given the nature of the explosion in central Oslo, it seemed that it must have been an Islamic terror attack, and this was apparently confirmed by a claim of responsibility by a Muslim jihad group. A couple of hours later this claim was withdrawn, however. At the same time, the shooter at Utøya was consistently described as blond and “Nordic-looking”. In the wee hours of the following morning, after Anders Behring Breivik had been apprehended and identified, the full horror of what had occurred sank in.

The Scandinavians on the team went to bed that night with only the sketchiest of ideas about what had happened. While they slept, a Swedish Nazi website put up a post identifying the killer as Fjordman, and linking to Gates of Vienna. Charles Johnson of Little Green Footballs picked up that story — taking Nazis as a credible source, how typical! — and helped direct massive traffic to our blog. By the next morning the mainstream media in Norway, Denmark, and Sweden had picked up the lie and repeated it, and the deluge was upon us.

When Fjordman woke up that morning to discover that he was not only being associated with the killer, but had been identified as the killer, he was devastated. That’s when his nightmare began, and it hasn’t ended yet. To be initially identified as a mass murderer, and then later on as the inspiration for that murderer — how much greater suffering and injustice could a man endure?

Those who have actually read his writings know what a travesty this media frenzy has been. But the vast majority of Scandinavian progressives who are crying out for his blood have never read his writings.

With luck, however — if the Norwegian MSM continues to point people towards Fjordman’s archived works — all of that may begin to change.

I invite readers to take a brief side-journey with me to a sunnier clime and a completely different political issue.

Just a few weeks before the horrific events in Oslo, a confrontation took place in Italy between the proponents and opponents of a high-speed rail connection between Lyon and Turin. The line is commonly referred to as TAV, an acronym for the Italian phrase Treno Alta Velocità, or high-velocity train. The route is planned to run through the Susa Valley in Northwest Italy, but a coalition of environmental activists and local residents — who object to the spoiling of the valley’s traditional beauty — have joined forces to oppose it.

So far, so good. Those who object to a government project gather together to demonstrate against it. This is how European democracy works, right? 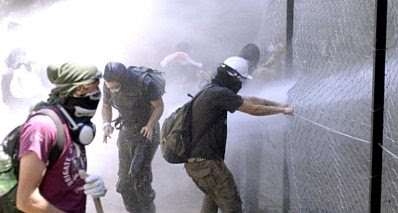 Well, yes and no. In this case, the protesters — a militant group known as “no-TAV” — became violent in their opposition to TAV. Massively violent, in fact — one hundred and eighty-eight police were injured. Yes, you read that correctly: nearly two hundred police officers were injured in the mêlée. Some of the demonstrators were charged with attempted murder.

Work has resumed on the TAV, but demonstrators are still attempting to block the construction, and there have been further injuries.

Why is this relevant to Fjordman and the Oslo massacre?

Consider this: the “no-TAV” movement is a traditional progressive cause. There are no “right-wing extremists” involved. Some of the locals who object to it may be middle-of-the road, and some may even have voted for the Lega Nord. In general, however, opposing hi-tech transportation projects is a favorite lefty pastime.

It’s a good bet that there are many well-meaning liberals in Italy who oppose the TAV, but who also object to violence, abhor the violence committed by the protesters, and would never consider engaging in such violence themselves.

Some of those anti-TAV people have presumably repudiated the violence used against the police. But they did this of their own free will; nobody demanded that they do it.

Non-violent people who support lefty causes are not required to denounce or repudiate those who commit violence on behalf of causes they share. Nobody ever blames them for inspiring the violence. They are not described in the popular press as “indirectly responsible” for it.

And that’s because they aren’t. Nobody who sincerely opposes violence and works for change solely through peaceful means is responsible for violence committed in the name of a cause they otherwise support.

Only people who advocate, promote, incite, or commit violence are responsible for that violence. Period.

None of what I wrote above should have needed to be said.

But saying it is necessary, because the rules are different for conservatives — or “right-wing extremists”, as we are more commonly known. Those rules are even more different for people who oppose Multiculturalism and mass immigration, and they are especially stringent for anyone who supports the preservation of traditional European cultures and national identities.

That’s why Fjordman is in the crosshairs. Anders Behring Breivik simply provided the opportunity to take down an advocate for European national cultures.

We all know the rules are different for us than they are for leftists. None of this is a surprise, and there’s no point in wailing about it or belaboring the point. The rules have been in place since long before most of us were born.

The iron fist is now out of the velvet glove because the wind has shifted in our favor, and those who promote the trans-national Multicultural political order realize it. They are losing control of events. Their carefully-constructed plan is coming undone, and overt repression is the only arrow they have left in their quiver.

As Al Stewart sang, “It’s only when the empire’s breaking/That you see their teeth.”

The trick is to refuse to play the game as laid down by the dominant culture. You cannot possibly win, so the only effective strategy is to refuse to enter the arena where the game is played.

It’s similar to what happens when you are accused of “racism”. Once the racism charge is hurled at you, you automatically lose. Insisting you are not a racist is of no avail. It doesn’t matter how many African or Samoan friends you have. The only way to prove you are not a racist is to accept the entire Progressive pantheon of ideas, from Multiculturalism through sustainable development all the way to the rights of transgendered people and animals.

Nothing else will help you. Just as in Islam, you are required to submit.

I decline to assemble on the tilted playing field where the “racism” game is played. I refuse to acknowledge the legitimacy of any arguments framed around the issue of racism. All discussion ends when the race card is played.

The same is true of “repudiating” the violence of the Oslo psychopath, of “disassociating oneself” from his violence.

It’s a mug’s game. Don’t be tempted into playing it. By dancing to that tune, you are granting the legitimacy of arguments that depend on guilt by association. You are admitting that there is some sort of causal connection between those who act peacefully and refuse violence when supporting a cause, and those who commit violence while purporting to further the same cause.

This is a lie. Don’t support it by engaging it.

Progressives are playing Three Card Monty with conservatives, and the marks are too naïve and gullible to understand what is being done to them. It doesn’t matter how closely they watch the hands move: when the card is flipped over, it is never theirs.

Don’t play that game. Don’t acknowledge that the game exists, because you cannot possibly win it.

I realize that asking people not to believe what they read in the papers is like asking sheep not to eat grass. But here goes…

Many of you have been pointed to this “hate blog” by various media sources. Your newspapers and TV outlets have described what we are all about, and have told you what you must think of us. Then they sent you here so that you could gaze at the monster yourself.

But now that you are actually here, you don’t have to take their word for it. You can read it for yourself. Check out the links on the sidebar, or consult the Fjordman files for a full index.

Fjordman and I may be judged on the body of our work. What we stand for is well-attested in what we have written over the last five years. It may take a while, but do go through the archives and assess Fjordman’s arguments using your own powers of evaluation and ratiocination.

Then you can make up your own minds. The experience may be an unfamiliar one, but I can guarantee that you will find it exhilarating.

Independent thinking can be quite addictive.