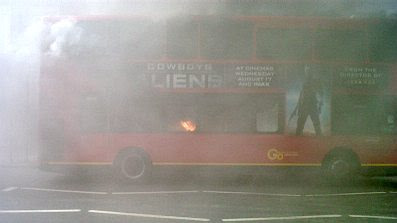 Prof. Robert Wistrich is a professor of Modern European History at the Hebrew University of Jerusalem and the director of its Vidal Sassoon International Center for the Study of Antisemitism (SICSA). The piece below, originally published in Jewish Journal, was written as a response to the recent riots in London.

Watching the ferocious criminality displayed during the riots in British cities during the past weeks, one might be forgiven for thinking that this explosion of mob violence was taking place in some dilapidated god-forsaken Third World country. The horrific scenes of homes and businesses of ordinary Britons going up in flames will not be easily forgotten. Property was smashed up with brazen impunity, cars burned, and there was looting on a truly massive scale. Not only businesses, banks, post-offices, off-licenses, newsagents and luxury-goods shops but also restaurants, pubs and cafes were comprehensively trashed. The video-recordings often show hooded looters replete with bundles of “free” sports goods under their arms, emerging from shops with big grins on their faces. Looters helped themselves to everything from flat-screen TVs and mobile phones to iPads, laptops and a wide variety of electronics.

For the first three days, the Metropolitan Police (MET) in Britain’s capital city appeared alarmingly powerless to stem the tide. The police have, unfortunately, had to function within a society paralyzed by the politics of victimhood, loudly defended by an increasingly misguided liberal intelligentsia. Within this victim culture most social problems are conveniently blamed on the “racism” or oppression of the majority, while ignoring the failings or delinquency of criminal individuals or gangs. Under this banner, even the British riots can be blamed on unemployment, poverty and the cuts in public spending (not yet implemented) proposed in the austerity program of the Cameron government. The simplistic equation adopted by the liberal Left sees the root cause of social disorder in “economic despair” and unspecified “racial tensions” between various communities. Not unexpectedly, London’s former Leftist Mayor, “Red” Ken Livingstone, immediately blamed the “Thatcherism” of the present Tory Government for the violence. For Livingstone and most of the Labour Left, it is all stunningly obvious — no spending cuts, no riots.

This has also been the kneejerk response of the New York Times, pontificating about the alienation and resentments of Britain’s unemployed youth, as if they were the real victims. But as Max Hastings pointed out in the London Daily Mail, the British mayhem was not sparked by hunger or evidence of real want, let alone any social or political agenda. It reflects the emergence not just of an amorphous underclass but of an amoral, brutalized subculture in which intellectually challenged youngsters claimed to be showing the rich and the fuzz that “we can do what we like.”

British Prime Minister, David Cameron, got it partly right when he responded to the chaos by stating: “This is not about poverty, it’s about culture” — a culture of rights and no responsibilities. But conservatives as much as liberals or leftists are to blame for their foolish support for a dependency culture in which recipients of the largesse of the welfare State have no incentive to be employed. Together with the dependency culture, came the disastrous assumption of entitlement to a high standard of living irrespective of any individual effort. As a result, the nanny-State has created a generation of morally crippled youths with no compunction about willfully smashing up their own communities.

During the last 40 years Britain has seen the breakdown of the family, households with absent fathers, high divorce rates in general, and the encouragement of a sexual free-for-all, embroidered by the dominant clichés of life-style choice. Liberal and leftist intellectuals have continued their relentless assault on British national identity in the name of multi-culturalism and “anti-imperialism”; calls for drug liberalization became increasingly frequent; education has become more and more “child-centered,” leaving issues of sexual morality and drug-taking largely in the hands of teenagers themselves. Sadly, Britain has been fostering an educational system in which teachers are more intimidated than pupils, a society where the police force is partially paralyzed by young looters destroying property with utter impunity, where corrupt politicians fiddle their expenses, where millionaires repeatedly evade tax and uncontrolled immigration is steadily undermining the social fabric.

In the United Kingdom, long notorious for its uncouth soccer hooligans and yob culture, there had long been disturbing signs of the incipient breakdown of civilized behavior which were studiously ignored. The current collapse of the British welfare-state model into mindless thuggery is a warning to all countries of the fragile nature of supposedly stable Western democracies. The thin façade of civilization protecting us from barbarism and mob rule has been exposed to full view. No society in which a significant sector of its youth are without fathers, without guidance, educational qualifications, modern skills or positive ambitions, can expect to survive, let alone prosper. The writing is on the wall for all to read.