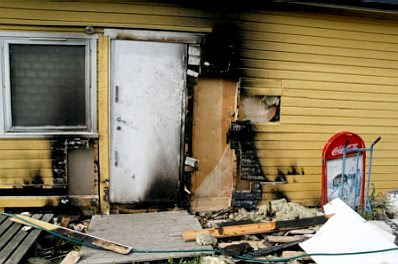 Our Norwegian correspondent The Observer sends his translation of an article from Wednesday’s Nordstrands Blad about a series of arson attacks in the town of Bøler. The owner of the kebab shop — which was rendered a total loss by the fires — is an immigrant, but there is as yet no indication that the arsonist himself is culturally enriched:

Police are convinced that there is a connection among the four fires in Bøler this week.

The first report of the fire in ‘Bøler pizza, kebab og kiosk’ came in at four o’clock on Saturday morning. Two hours later the police received a second report about a burning car at the intersection of Bølerlia/General Ruges vei. The fires were quickly extinguished and there was never any danger of the fire spreading. The takeaway shop and the car received extensive damages.

At one o’clock on Sunday morning the police received another report about a fire in the same takeaway shop. Two hours later two cars were discovered burning at another section of the local shopping centre.

“We suspect that all the fires were deliberately set. There is no other natural explanation,” says Terje Dahl, a police officer and the head of the fire unit at Oslo police precinct.

Police have secured bottles containing flammable liquid and some papers that were used to start the fires.

“We are collecting evidence from all the CCTV cameras in the area,” says Dahl.

“If someone has seen anything we’d like to get in touch with them,” says Dahl.

The investigation is being conducted by the fire unit, but Manglerud Police station has been fully briefed and is going to keep a close eye on the area in the future.

The takeaway shop is owned by Bøler IF (Local sport club) which is renting it out. The leader of Bøler IF, Bjørn Olav Larsen, fears that an arsonist is on the loose in Bøler.

“This is vandalism, and it worries me that arsonists are on the loose in Bøler. I live only a stone’s throw away,” he says.

The building will have to be demolished

“Even though the structure of the building is intact, the insurance surveyor has classified the building as beyond repair. This is very sad and it will have economic repercussions for the club. At least we’re grateful that no one was injured in the fire,” says Larsen

The owner of ‘Bøler pizza, kebab og kiosk’, Zhigar Omer, has rented the premises for almost a year.

“I haven’t heard anything from the police yet, but the fires were definitely set. The building will have to be demolished, and it’s up to the board of the club to decide what happens next. Meanwhile I’m without a job,” says Omer.