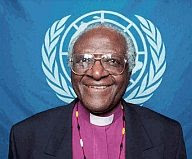 South African reader RH sent us the article below, which describes the latest innovative proposal by Desmond Tutu, the retired (Anglican) Archbishop of Cape Town. The Most Rev. Tutu has proposed a new income-redistribution plan that could solve all South Africa’s financial problems: a tax on white people.

Come to think of it, isn’t that what was just imposed in England last week? Admittedly, that tax is indirect:

The vast majority of British taxpayers are, well, white. So there you go.

But back to South Africa. RH had this to say about the whole affair:

I’m just wondering what I can downgrade my car to… I currently have a 1.4 Chico that is most probably worth R30k (+/- $4000) – all whites must downgrade their cars he said on Friday.

I’m tired of people like him. They want to keep Africans poor while they line their own pockets. And in so doing they miss the irony: not only are his ideas racist towards white people, they are racist towards blacks, assuming the latter can never stand up and be counted unless it is with white money.

From Breadbasket to Begging Bowl; the Fall of the Rainbow Nation — that’s all I have to say.

And here’s the story from the Begging Bowl, formerly known as the Republic of South Africa. From News24:

Johannesburg – Calls made by Archbishop Emeritus Desmond Tutu for white South African’s to be taxed were racist and thoughtless, the Freedom Front Plus said on Saturday.

“It borders on the emotional statements of [ANC Youth League president] Julius Malema and does not contribute to the debate on how to address the country’s economic problems properly,” FF Plus spokesperson Anton Alberts said.

Tutu, who spoke at a book launch at the University of Stellenbosch in Cape Town on Thursday evening, said the damage apartheid caused was impossible to escape.

He said white citizens needed to accept the obvious: “You all benefited from apartheid.”

“Your children could go to good schools. You lived in smart neighbourhoods. Yet so many of my fellow white citizens become upset when you mention this. Why? Some are crippled by shame and guilt and respond with self-justification or indifference.

“Both attitudes make that we are less than we can be.”

The Cape Argus spoke to Tutu after the speech, where he expanded on his wealth tax call.

“There were many in the white community who were ready for this [at the time of the TRC process].

“It could be quite piffling, maybe 1% of their stock exchange holdings. It’s nothing. But it could have helped… maybe building new homes, and that would have been an extraordinary symbol of their readiness.”

Asked whether he was again calling for a “wealth tax”, Tutu said: “That’s what I’m saying.”

He then laughed: “What were you doing in there [the conference centre]? Were you listening?”

Tutu said he hoped whites themselves would “agitate” for it to be imposed upon them.

However Alberts said in a statement it was improper to single out white people as they have contributed disproportionately more to the fiscus than any other group for the past 17 years.

“The request for introspection and a greater moral contribution should instead be addressed to the ANC government itself.”

Tutu’s race argument was so much more immoral if taking into account the fact that there were already more than 600 000 poor whites, he said.

“Taxes levied on white people will merely be damaging social cohesion and will not contribute anything toward a sustainable economy.”

12 thoughts on “A Tax on White Privilege”