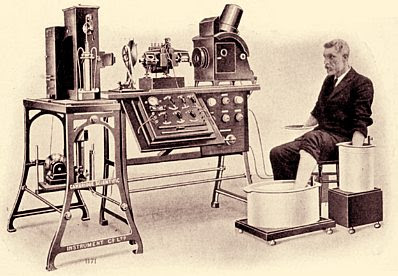 The video below is a promotional presentation by the Department of Homeland Security for a project known as “Future Attribute Screening Technology”, or FAST. The project is not new — the video came out several years ago — and the technology is not new, either. The system incorporates several existing forms of non-invasive psychological evaluation methods, including thermal imaging, the monitoring of heart rate, etc. It doesn’t even include the measurement of galvanic skin response (as commonly used in lie detectors), but produces similar results through other means. Just as with the full-body scanner, a subject has only to stand in one place briefly to be examined by several forms of instrumentation, whose results are then analyzed and recorded in a networked computer system.

The purpose of this new form of electronic scrutiny is nothing less than to detect in advance the intention or propensity to do violence. It is truly Orwellian in its proposed scope.

Here’s what the DHS website says about FAST and two related projects:

Project Overview: The Science and Technology (S&T) Directorate Human Factors/Behavioral Sciences Division (HFD) Future Attribute Screening Technology (FAST) project is an initiative to develop a prototype screening facility containing a suite of real-time, non-invasive sensor technologies to detect cues indicative of mal-intent (the intent or desire to cause harm) rapidly, reliably, and remotely. The system will measure both physiological and behavioral signals to make probabilistic assessments of mal-intent based on sensor outputs and advanced fusion algorithms and measure indicators using culturally neutral and non-invasive sensors. FAST uses an established independent peer-review process to ensure objectivity and thoroughness in addressing all aspects of the program.

The project was spearheaded by the Battelle Memorial Institute, a research and development organization that is actually a charitable trust headquartered in Columbus, Ohio (as of this writing, the organization’s website was down, due to a cyberattack on it and its affiliated laboratories).

What’s really creepy is that the same organization has a spinoff project known as “Battelle for Kids”, which “believes in and is committed to transformational change in education.”

Well, I guess we know our children’s future is in good hands.

And now for the video, which is just below the jump:

What makes it difficult to resist this 21st-century version of Big Brother is that nobody can argue against better security for ordinary citizens. Everybody is in favor of not being blown up at the airport, or the ball park, or the shopping mall.

Did you notice the docile subjects lined up in front of those grim mobile labs, chatting with each other while waiting for their turn to be examined? Yes, we know they are only actors or company employees pretending to be citizens doing their civic duty. But real citizens who line up for the scanners now in use at all airports display the same sort of docility — FAST is just one step further in the direction of the complete abandonment of privacy.

Just think about what this means: your future “intentions” will be discerned, and if you have just had an argument with your wife or are on the way to visit your mother-in-law, you might be one of the 20% false positives and end up in the little room having a chat with the special agents, revealing the total contents of your mind to interrogators using the latest oh-so-gentle high-tech methods.

And this is without having committed a crime, without being accused of a crime, and without even having intended a crime. This could happen if your face is too warm or too cold, or you took Sudafed and your heart is racing, or entertained some angry thoughts just before being scrutinized.

Right now it’s mainly airports, but after Islamic terrorists blow up a mall or a theme park, we can expect airport-style security to pop up all over the place. And why not? It means increased employment, and is good for the local economy.

It will also mean giving up your inner self to vigilant strangers as the price for leading a normal life and going about your everyday business.

Doesn’t anyone wonder whether this has any place in a society that prizes liberty?

Is it even constitutional?

And this is without even considering the Islamic angle. How much do you want to bet the Muslimas in their hijabs will get an exemption from all this nonsense?

No, it will primarily be Mr. and Mrs. Whiteman who can expect to have their minds read by the mobile inquisitors.

12 thoughts on “The FAST Track to Big Brother”