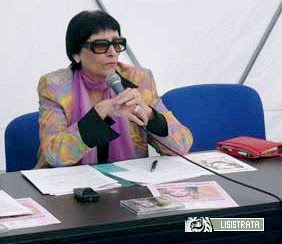 Adriana Bolchini Gaigher is an Italian journalist and the national president of O.D.D.I.I. (Observatory of Italian and International Law), as well as the founder and director of the online magazine Lisistrata.

Some years before 2001 she began to notice problems with immigrants, particularly Muslims, and began to investigate. This led to the decision to found O.D.D.I.I., to use legal means to defend the Constitution and Italian law.

In addition to supporting human rights and freedom, she opposes those who have totalitarian plans and are against democracy, and attempt to deprive Italians of their freedom of expression by means of both physical threats and legislation which has lost its western and democratic authority. Because of her activism she has been accused of instigating attacks on mosques in Milan mosques, and other multiculti “hate crimes”.

The latest charges against Adriana Bolchini were instigated by a Muslim, who is suing because of an article published by her five years ago. Below is a brief summary of the case, translated from the Italian:

Adriana Bolchini was denounced by Nour Dachan, the former president of UCOII (Islamic Association in Italy) with close ties to the Muslim Brotherhood. She will go on trial July 5, 2011 in Ancona (Marche — Italy).

The complaint falls within the context of complaints that Muslims regularly make against those who dare to highlight the incongruencies of Islamic doctrine. In the case involving Nour Dachan, however, the situation is slightly different. Adriana Bolchini is being sued because she highlighted the fact that Mr. Dachan was taking advantage of a kidnapping in Afghanistan (of convert Gabriele Torsello) by the Taliban who were demanding a ransom to free him.

Nour Dachan benefited from the situation by standing as an intermediary between the family and the kidnappers, with an appeal to the Taliban in Italian and Arabic, forgetting that Afghans are descended from various ethnic groups as reflected in the languages they speak. The most important group are the Pashtun, from the area close to Pakistan, who speak Pashto; another group speaks Persian (also known as Farsi) in the Dari dialect. Both languages do not have Arabic origins, but Iranian. Then there is another language used in Afghanistan which is Urdu, the legacy of the Delhi Sultanate and Mughal empire.

Obviously the charge against Adriana Bolchini is related to defamation, as attached.

We invite you to support Adriana Bolchini in her struggle for freedom of thought, speech and opposition to Islam that seeks to impose Islamic Sharia law everywhere they live.

The article referred to in the indictment

2 thoughts on “Lawfare in Italy”