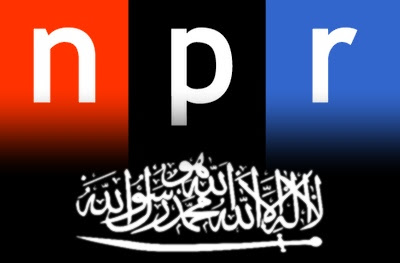 Long-time readers of Gates of Vienna know what we think of this formerly taxpayer-supported propaganda crew. Thus you can imagine our pleasure in seeing more exposure — via CSP’s robust fact checking (below) — of the dhimmi dudes at 635 Massachusetts Avenue. But we probably never thought to tell you how far back our deep contempt for this leftist organ goes, or how the Baron and my middle son devised a work-around to avoid entirely NPR’s propaganda onslaught.

Recall that we don’t have a television (yes, on purpose), and so our nighttime radio here in the country was limited to NPR. With the preparation for the First Gulf War, it was obvious we’d need real news reporting. But where could we get it?

Well, somewhere or other we’d acquired an antique shortwave radio. None of us remembers how it came into our possession but it was to this device we turned for Operation Desert Storm. The two guys rigged up an antenna. As I recall, they ran copper wiring from the window in the back room to the nearest oak and then further out to a tall pine. For all I know there may be remnants of that old antenna still in the pine tree.

Voilà! We were free of NPR and could tool ’round the world listening to points of view the slick, publicly-funded propanganda engine carefully excised from their reporting.

What follows is a partial cross-posting from The Center for Security Policy’s report, “Fact-Checking NPR’s Agenda Journalism on Terrorism”, by David Reaboi and Travis Korson. The text emphases below are in the original.

The NPR report alleged that the head of Ohio’s Muslim outreach program Omar al-Omari was wrongly terminated due to a law enforcement briefing on political Islam. We needed to issue several corrections:

NPR Claim #1: “Federal officials familiar with the case say Omari was singled out because he distinguished between extremist Muslims and mainstream Muslims in his outreach and training programs.”

Fact Check #1: Many of the materials Omari had written, including his Guide to Arabic and Islamic Culture[a 20 page pdf from ohio.gov — my computer freezes on opening it; yours might be fine -D] and a brochure titled ‘Agents of Radicalization‘ were slanted towards a pro-radical Islamic view and support a revisionist history which blames America for many of the Middle East’s problems. In the Guide, Omari defines jihad as:

Jihad doesn’t mean holy war, as many people are led to believe. It actually means a struggle to achieve excellence. It’s the struggle Muslims face in life which varies from the Greater Jihad where a person is obliged to struggle within him/herself to overcome evil and establish good, to the Lesser Jihad which is the struggle in daily life. As Muslims are obliged to maximize their potential in order to be the best citizens they can be, jihad is the vehicle that lifts them to the challenge. The term holy war is a European concept that began with the Crusades and was extended to Islam by the West.

In an interview with The Investigative Project on Terrorism, Zuhdi Jasser, Muslim President of the American Islamic Forum for Democracy was highly critical of Omari’s publications:

Jasser describes the two publications as “full of factual inaccuracies” including the assertion that 66 percent of American Arabs are Muslim (close to three-fourths are Christian). Alomari also “misses the core problem: political Islam.” Instead, he indulges in “bizarre revisionist history” which “seeks to portray Muslims as victims.”

The United States is engaged in “a war of ideas” with radical Islam. Regarding jihadists, “you would hope that [Alomari] would say that these are corrupt thugs who have hijacked our faith,” Jasser told the Investigative Project on Terrorism. But instead he “describes [terrorism] as a response to what the West has done.”

The material Alomari’s agency is putting out is “classic Islamist propaganda” which suggests that “these thugs who kill people in restaurants and shopping malls will stop if we solve the Arab-Israeli conflict,” Jasser said. “In fact, they’ll find another grievance in a year or two.”

The brochure “Agents of Radicalization,” was printed but then copies were destroyed because Omari had listed as “organizations we are working with” a list that included numerous unindicted co-conspirators from the Holy Land Foundation terrorism finance trial”:

Many of these groups were listed as unindicted coconspirators in the largest terrorism financing trial in American history, US vs Holy Land Foundation.

Omari’s brochure on radicalization was never distributed, according to a source within the Department:

Thousands of copies were printed up by the department (at taxpayer expense, of course). Some copies had been provided to some of our partner agencies. As boxes of these things were getting ready to be shipped out, our director was contacted by some counter-terrorism officials and told that the brochure was promoting groups that the FBI and other agencies were trying to distance themselves from (like CAIR).

According to a report by counterterrorism expert Patrick Poole, Ten Failures of the U.S. Government on the Domestic Islamist Threat,

“When [Omari] organized a forum on “interfaith dialogue” for the department in August 2009, the two lone Muslim representatives included a local imam, Hany Saqr, who was identified in the Holy Land Foundation trial as one of the top Muslim Brotherhood leaders in the nation; and CAIR-Ohio president Asma Mobin-Uddin.”

Fact Check #2: Omari was fired not only for failing to list his prior employment at Columbus State Community College, “where he was fired after an improper consensual sexual affair with a student,” according to the Columbus Dispatch newspaper but also for failing to disclose his prior work for the Jordanian Minister of Labor and for lying to investigators, also reported by FOX News and first published at the online investigative journalism website My Pet Jawa.

According to reports, Omari sued the female student who had reported his illicit activities as sexual harassment to higher-ups, claiming the woman had defamed him. He lost.

The Center for Security Policy has several more FACT CHECKS just on this one story. It joins countless other examples of National Public Radio’s egregiously sloppy and slanted coverage.

In their wrapup, they say:

This information was available to National Public Radio by simply googling Omari’s name, but NPR’s story was not an exercise in journalism. They’re in the whitewashing business for Islamist supporters like Omari.

Congress, on the other hand, is in the spending reduction business these days. Exactly one year after the public exposure of Omari began, on March 17, 2011, the House of Representatives voted to stop federal funding for National Public Radio. The vote was 228 to 192. Not even close.

Before the advent of internet investigative reporting (The Jawa Report figures large in this example) we’d have been stuck with whichever way NPR wanted to spin the story. Back then, we could only sigh in disgust and mutter “National Palestinian Radio is at it again” as we hit the ‘off’ button; we had no effective way to counter their fictional spins with factual accounts.

By the way, the top story on Jawa Report earlier today concerned the boarding of a Flotilla boat by the IDF, complete with blowback from the usual suspects.

2 thoughts on “NPR: Dhimmi Dudes Dumber Than Ever”