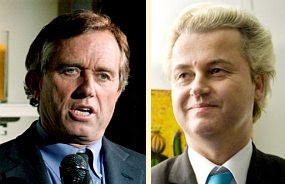 How do we know? A Kennedy said so! No further proof is required.

Many thanks to the PVV for sending this report:

Robert F. Kennedy Jr., the son of American presidential candidate Robert F. Kennedy, who was murdered in 1968, is currently in the Netherlands. He gave an interview to the left-wing television channel NCRV in which he said that Geert Wilders is a racist:

In a reaction to the interview Mr. Wilders said, “This is clearly utter nonsense and malicious. To me, racism is just as despicable as to anyone else with common sense. Kennedy Jr. is either badly informed or he does not know what he is saying. That is a pity.”

The part of the interview on Wilders can be seen here:

23 thoughts on “The Verdict From Camelot”