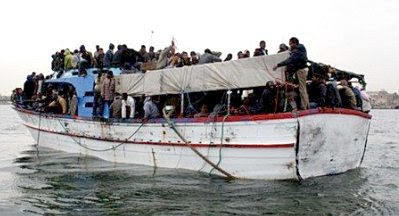 A single dinghy carrying 290 culture-enrichers arrived on the island of Lampedusa yesterday:

(AGI) Lampedusa — An old dinghy boat has made landfall on Lampedusa escorted into port by the vessels of the Guardia di finanza. On board were 290 persons, including 27 women and 9 children, all of Sub-Saharan origin, who departed from Libya 3 days ago. Their conditions do not raise concern. This arrival of migrants occurred after 2 days of pause following the flurry of arrivals that on Saturday had boosted the overall number of migrants present on the island to 2,140 persons.

This slight uptick in the total number of migrants is not large enough to warrant any modification in our graphic for the Cultural Enrichment Thermometer.

Ninety refugees from Egypt were also detained by a European border agency patrol off Crete:

A total of 90 illegal migrants, who were picked up by a FRONTEX patrol boat southwest of the island of Crete at dawn Saturday, will be transferred to the Attica alien’s bureau on Tuesday so that deportation procedures will be initiated. The illegal migrants, who told authorities they are from Egypt, were rescued from a distressed vessel in the early hours of Saturday by the Iceland-flagged “OPV Aegir” taking part in the Frontex “Poseidon 2011” joint European operation, which was patrolling the region at the time.

Meanwhile, a similar number of would-be immigrants had engine trouble and never made it out of Egyptian coastal waters:

(AKI) — The Egyptian coast guard has rescued 87 people aboard a boat that set sail for Italy and risked sinking, according to Egyptian newspaper al-Youm al-Sabaa.

The migrants on Monday were intercepted 12 miles off the Egyptian coast near Alexandria in the country’s north, according to the report.

Shortly after embarking for Italy the boat experienced mechanical trouble prompting one of the passengers to call for help.

Of the 44,700 culture-enrichers that have arrived in Italy since the beginning of the year, 74 were deported to their countries of origin last week:

Those are the numbers for one week, and comprise 0.165% of the total. At this rate, the last of the enrichers will leave Italy by the year 2022 — assuming that no more arrive, and none of the refugees manage to breed in the meantime.

Frontex, the EU border agency, has looked into the matter, and concluded that the majority of illegal immigrants that enter the EU come in through Italy.

Frontex: Most Illegal Migrants to EU Head to Italy

Athens, Greece —The main flow of illegal migrants seeking to enter the European Union has shifted dramatically from Greek borders to Italian islands due to the conflicts in north Africa, the bloc’s border protection agency said Tuesday.

A total of about 33,000 people were detected trying to enter the 27-nation bloc in the first three months of the year, with 22,600 of them detected at Italian borders, mainly in the area around the island of Lampedusa, said Frontex deputy director Gil Arias Fernandez.

Greece, which was previously the main point of entry for people seeking to cross into the EU, saw 7,200 illegal entries in the same time period.

In the same three months of 2010, just 147 illegal migrants had been detected trying to enter Italy, compared to 13,085 attempting to get into Greece, Frontex figures showed.

Fernandez said that while it was difficult to predict what would happen in the rest of the year, “the situation will remain quite dramatic in the central Mediterranean.”

According to Frontex, more than 41,000 people attempted to enter the EU in the area around Lampedusa, and the other Italian islands of Sicily and Sardinia from January to today, including 1,600 people over the weekend.

Here’s a different version of the same story, from AKI:

Brussels, 15 June (AKI) — Unrest in North Africa this year has caused the main flow of flow of illegal immigrants seeking to enter the European Union to switch from Greece to Italy’s islands, the EU’s border protection agency Frontex said Tuesday.

Frontex said a total of about 33,000 migrants were detected trying to enter the 27-nation bloc in the first three months of the year, more than double the figure for the same period of 2010. Over two-thirds of this number – 22,600 people – were found at Italy’s borders, mainly in the area around the tiny southern island of Lampedusa, said Frontex deputy director Gil Arias Fernandez.

Greece, whose frontier with Turkey was previously the main entry for people seeking to cross into the EU, saw 7,200 illegal entries in the same time period compared with 13,100 in January-March 2010 after border patrols were strengthened, according to Frontex.

More than 41,000 migrants have reached Lampedusa since the start of the year, including over 1,600 last weekend.

Fernandez said that while it was difficult to predict what would happen in the rest of the year, “the situation will remain quite dramatic in the central Mediterranean.”

EU leaders are due to discuss possible revisions to the EU’s Schengen passport-free travel system for countries that are unable to control illegal immigration.

The above articles are useful, since they give us an estimate of how many migrants attempted to cross from Turkey to Greece during the first quarter of 2011.

The “Camp of the Saints” crisis has become so alarming that The Daily Mail has picked up the story:

2,500 Illegal Immigrants a Week From North Africa Flooding Into Europe Through Italy

As many as 2,500 illegal immigrants a week are flooding into the continent from North Africa through Italy, the European Union’s border protection agency has revealed.

The official figures, which came from Warsaw based Frontex, show that for the first three months of this year 33,000 people entered Europe illegally with 22,600 coming through Italy.

Most of those were economic migrants from Tunisia and sub-Saharan Africa who had fled countries that had been hit by popular uprisings in what was dubbed the Arab Spring.

Many of them came through the rocky Italian outcrop of Lampedusa on rickety fishing boats pushing the island’s limited resources to the limit with numbers at one point being double that of the 5,000 local inhabitants.

With perfect timing the announcement from Frontex came as coastguards on Lampedusa intercepted a boat carrying 290 illegal immigrants, which added to the 1,600 that had arrived during the weekend.

One British official involved in illegal immigration in Italy said, ‘This is a big, big problem and added to this we still have the criminal gangs who are bringing people in.

‘We have passed on information that has helped intercept three boats involved in criminal people smuggling but that is a drop in the ocean compared to the huge numbers coming over.’

Many illegal immigrants have drowned in their attempts to cross from north Africa with dozens of boats sinking and other still missing and officials say with the summer fast approaching traffic will increase.

Italy has complained that other European states are not doing enough to help with the situation and there was a tense stand off with France who simply sent them back when they crossed over.

Before the civil war began Libyan patrol boats stopped any vessel attempting to set sail in a deal agreed with Italy and before the bombing campaign started mad dog Colonel Gaddafi threatened to turn Europe “black through illegal immigration” in an attempt to ward off military intervention.

The general accuracy of the Mail is often questioned, but regular readers of this blog will notice that the above article has its facts straight, and presents a lucid summary of what has happened so far in the Mediterranean refugee crisis.

Finally, we have some wishful thinking on the part of the Italian foreign minister, who believes that when the new regime takes over in Libya, it will cooperate with Italy and turn off the refugee spigot:

Libyan rebel leader, Mustafa Abdel Jalil, has previously said that a post-Gaddafi Libyan Government would respect “all agreements with Italy by the [Gaddafi] regime, including those involving combating illegal migration and oil contracts with Eni.” Specifically, Jalil has said that the rebels would “respect the Italian-Libyan Treaty signed by Prime Minister Silvio Berlusconi and Colonel Muammar Gaddafi. … Any treaty or agreement [which was done] we respect it” and “we will try to implement the treaties.”

When Col. Qadafi departs for that great Bedouin tent in the sky, and the New Boss finally replaces the Old Boss, will the flow of migrants really dry up?

Yes, we may assume that it will, eventually. But only if the EU reinstates the status quo ante, and pays the new regime to keep the wretched refuse penned up on the teeming southern shores. This was the deal that Gheddafi always demanded, and there’s no reason to expect that the terms will change just because a new thug rules in Tripoli.