Henrik Ræder Clausen recently visited Cyprus, where one of his stops was the Omerie Mosque. He was disturbed by conditions at this historic building, and was moved to write a letter to the editors of several periodicals.

As of this posting, no publication deigned to publish the letter. The text of Henrik’s account, accompanied by the photos he took, is below. 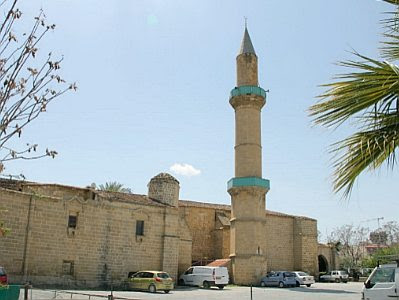 Who is responsible for the Omerie Mosque?

On a recent visit to Cyprus, I had the opportunity to visit the Omerie Mosque, previously the Church of the Holy Maria. What I saw was disturbing, and I think it deserves to be addressed.

First I noticed a poster requesting Muslims not to eat a particular brand of yoghurt, for it contains gelatin, which again is based on pork. It is a detail, but a clear one. The organization behind the mosque are requesting the Muslims to adhere to Sharia law, to let ancient religious rules dictate details of their everyday behaviour. 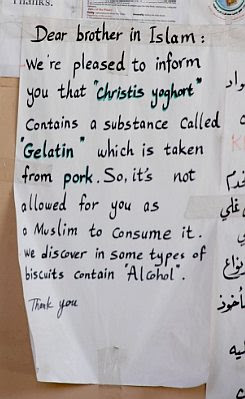 The fact that such detailed regulation of everyday life is totalitarian is of lesser concern. What matters here is that Sharia is a system supposedly given by Allah, and in contrast to modern law in Western countries cannot be changed by humans. In other Western countries, like United Kingdom and my own country Denmark, we have problems with creeping implementation of Sharia law, as opposed to secular, democratic law. Sharia comes in details like this, which we need to be aware of.

A plaque on the wall announces that the mosque is operated by the International Islamic Call Society, the Great Jamaheriya. 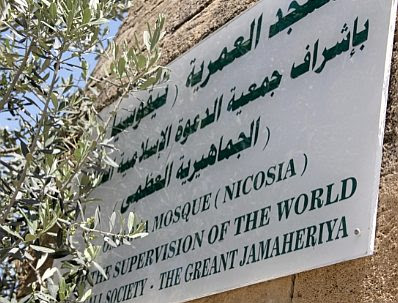 It is worth quoting from their mission statements, which can be found here:


WICS is interested in bridging the gaps among peoples of different religions and bringing them closer by promoting Islamic dominance. One of the main focuses of the Society is to promote a version of Islam opposed to pluralism / interfaith co-existence.

Libyan Leader Colonel Gaddafi, funder and founder of WICS, has stated on record, “This religion shall overcome all other religions before it. Their time has gone. It is his promise. Allah shall prevail this religion over the rest.

This would be what the Omerie Mosque is intended to promote. I am puzzled that they are permitted to use an ancient and historical church building for furthering this agenda.

As for the church building itself, it is clearly in need of maintenance and repair. Weeds growing in the roofs and even small trees finding cracks in the walls makes it clear that to avoid structural damage, quite some work is needed soon. Our guide, however, told us that the organization behind the mosque stubbornly refuses to let the Antiquities Department commence repairs. 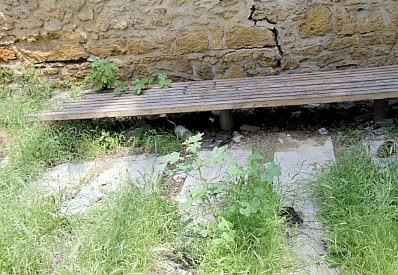 A tour of the garden yields another surprise: It is entirely unkempt, littered, and is even used as a garbage dump for broken furniture, clothes and broken air-condition systems. 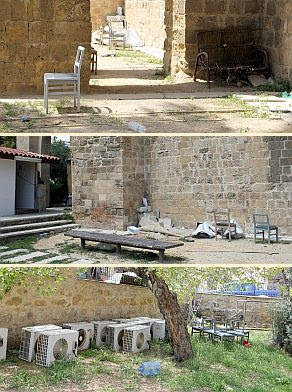 Do the people using this historical building have absolutely no reverence for the property they are generously permitted to use? 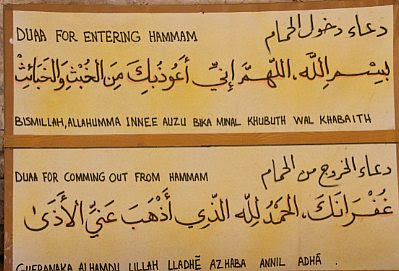 They request believers to wash themselves before prayer, but make no attempt to keep even the small garden somewhat in order. In contrast with, for example, the Hala Sulta Tekke mosque in Larnaca.

I believe some conditions can and should be placed upon the organization operating the mosque, in order that they might keep their permission to use a building of such historical value. This would include for example:

Handling interfaith relations is no trivial matter, and should be approached with tact and mutual respect. Making reasonable demands on every party to the relations is an important building stone for mutual understanding and peaceful interfaith coexistence. There is no good reason that the International Islamic Call Society should not be faced with reasonable requests for clarifications and conditions for their continued use of public buildings.