I’m working on several posts, but the press of recent events has prevented me from finishing them tonight. To tide you over, here is a Vlad-Baron joint venture.

Vlad Tepes was inspired by a Johnny Hart “B.C.” comic strip from back in 2003, which showed a character entering an outhouse with a crescent on the door and a crescent moon in the sky. It was widely perceived at the time by sensitive souls as a slur against Muslims (the original comic strip may be seen here).

Vlad’s idea was to add a star to the crescent on an outhouse door and make a T-shirt of the result. It was my job to execute the graphic, and I added a shahada (the text of the black flag of jihad) to the roll of toilet paper. The result looked like this: 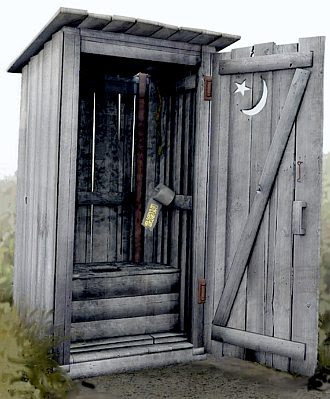 Below is the T-shirt Vlad made from the image, which is being held by a person whose face you may recognize: 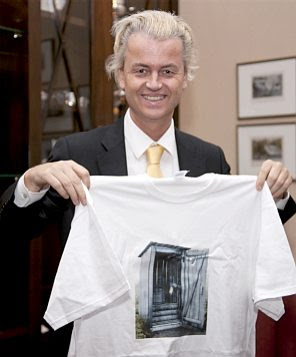 Vlad gave Geert Wilders his very own Outhouse Shahada shirt when Mr. Wilders was in Ottawa for an event earlier this week.

In due course I hope to post some videos from the same event, but I don’t think they will include the T-shirt…

7 thoughts on “The Outhouse Shahada”