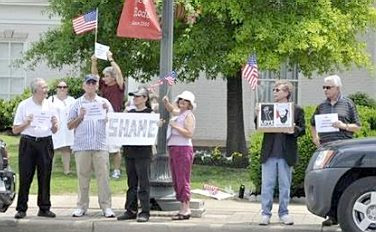 I brought home a print copy of yesterday’s Tennessean, and the article below was on the first page of the B section (“Local & Business”).

The online version is identical, except for a factual error in the print copy about the leadership of the Tennessee Freedom Coalition, which the paper corrected after having it brought to their attention.

All four stories on the same front page of B section are quite politically correct. Besides the article on Geert, we see:

So this gives you an idea of what kind of rag The Tennessean is. It is, after all, a Gannett paper, and Gannett seems to impose this sort of squishy vanilla liberalism on its local franchises all over the country.

The reporter had a hard time catching Geert out, however. Mr. Wilders has fined-tuned his message in the face of a far more hostile and more leftist European press, so that he is as bullet-proof against PC as it is possible to be while still remaining anti-Islam.

Below is the paper’s take on Nashville’s encounter with the Great Islamophobe. I’ll only include a few of my own comments, since I’ll have more to say in later posts about Geert’s visit to Tennessee:

Dutch politician Geert Wilders sees a kindred spirit in Tennessee — a state where new mosques draw protests and the legislature is considering a bill that once targeted adherents of Islamic law. 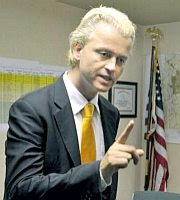 On trial for hate speech in his home country, Wilders brought his headline-grabbing views on Islam to Middle Tennessee on Thursday. He came to town as the invited guest of the Tennessee Freedom Coalition, a 2-week-old political coalition founded by Republican former congressional candidate Lou Ann Zelenik.

“I come with a warning for America,” said Wilders, a filmmaker and member of the Dutch parliament, and something of a cult celebrity in some conservative circles. [emphasis added]

Inserting the word “cult” before “celebrity” tips the reporter’s hand. No liberal-progressive celebrity would earn such a modifier. This is intended to tag those who are interested in Mr. Wilders’ message as right-wing kooks.

Close Islamic schools, he warned America. Halt construction of mosques — or “hate palaces,” as he calls them. Cut off immigration from “non-Western and especially Islamic countries,” and expel any immigrants who do not “assimilate.”

“I was happy to visit the state of Tennessee, where I know a lot of people — certainly a lot of Christians — feel the same threat as we do, and know when you talk about values, when you talk about who you are and who you are not, and that Christianity is for certain not the same as Islam,” said Wilders, who is not himself a Christian. “I compare Islam not with Christianity and Judaism. I compare Islam with fascism and communism.”

His first stop of the day was talk show host Steve Gill’s radio show, then a meet-and-greet and news conference at Williamson County Republican Party headquarters in Franklin. The evening ended with a closed-to-the-press speech at Cornerstone Church in Madison about what Wilders sees as the evils of the world’s second-largest religion.

And now for the protesters. Unlike, say, the BBC, The Tennessean is honest about how many there were — about ten or twelve. These were not anarchists or culture-enrichers, but ordinary Tennesseans of the secular liberal faith. I had a nice chat with some of them; I’ll report more on that later.

The important thing to notice about the events in Franklin and Nashville is that there were at most twenty or so demonstrators, whereas several thousand sympathetic listeners turned out to hear what Mr. Wilders had to say. The evening at the Cornerstone Church was unprecedented in my experience, and should be the model for future efforts.

In Franklin, about a dozen protesters stood in the punishing May sunshine across from Republican headquarters, waving signs that said “SHAME” and “Be nice or go away.”

Great motto, that — “Be nice or go away.” Does it ever apply to Anjem Choudary?

“It’s very inappropriate for an official political party here in Tennessee to bring in someone so notorious,” said Williamson County Democratic Party Chairman Peter Burr. “This guy is sort of the epitome of the outside agitator. That’s not the way we do business here in Tennessee.”

During the evening’s program, Bill Warner agreed with The Tennessean, and insisted that “outside agitators” should be sent home — which would then make his job unnecessary.

Across the street, about two dozen visitors milled outside Republican Party headquarters, eating lunch or filing inside to shake hands with Wilders. He traveled with a contingent of local and Dutch security, wary of the large number of death threats he has drawn over the years.

Despite the controversy, or perhaps because of it, his visit was a headline-grabbing coup for the fledgling Tennessee Freedom Coalition.

“Not bad for our first event,” said Jeff Hartline, the coalition’s director. Wilders’ visit was not an official fundraiser for the coalition or the GOP, although Hartline said he expected to see a spike in donations as a result.

Wilders’ visit comes as the Tennessee legislature moves toward a vote on what was once known as the anti-Shariah law bill. After a storm of protests, lawmakers stripped any reference to Shariah — the religious law of Islam — from the bill. Instead, it now grants the Tennessee governor and the state attorney general the power to declare organizations to be terrorist groups.

It is expected to pass overwhelmingly.

Wilders, meanwhile, squeezed in his Tennessee visit between a speaking tour of Canada and his return home to the Netherlands.

I never saw any CAIR protesters at either event, although I heard there were a few out by the road in front of the Cornerstone Church, and at least one Muslima attended the speech wearing full hijab. However, CAIR was dutifully consulted by the newspaper for the occasion:

The Council on American-Islamic Relations issued a statement condemning Wilders’ visit to Tennessee and asking state and local Republican officials to repudiate the decision to “honor one of the world’s leading Islam-haters.”

It will be interesting to see how many Tennessee Republicans run and hide under the bed after being called out by CAIR. Based on the handful I met, they are not lily-livered lickspittle cowards like most of their brethren at the national level in Washington D.C.

But we shall see.

14 thoughts on “The Tennessean Weighs In”