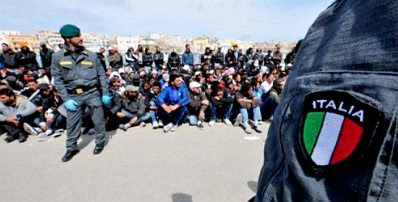 A reminder that that the “Camp of the Saints” crisis is still in its early stages comes from the European Commission, which estimates that well over half a million refugees have fled Libya since the uprisings began in January:

(AGI) Brussels — According to the EU’s latest estimates, 650,000 people have left Libya to escape war and bloodshed. The figure was released in the context of the Commission’s report on the EU’s immigration policy. All fugitives have sought refuge in neighboring countries, mainly Tunisia and Egypt, and many have already been helped so as to enable them to return home.

Meanwhile, over 25,000 migrants chose Europe; most of these come from Tunisia, and the majority of them landed on Italy’s coastline (essentially in Lampedusa) and in Malta.

Actually, according to Italian estimates, about 30,000 culture-enrichers have come ashore since the crisis began. But what’s a few thousand migrants here and there?

A lot of the refugees will eventually return home. However, we may assume that a substantial proportion of them will climb into the rickety boats and head for Lampedusa.

Then, when they get to their destination, they may take the opportunity to engage in a favorite culturally enriched pastime: rioting and burning stuff. The following incident occurred at a temporary camp at the far western end of Sicily:

(AGI) Trapani — Tunisian migrants held at an identification centre in Trapani staged protests this afternoon. The group set fire to mattresses and began loud protests from behind the barred windows at the facility. The fire brigade were called in to turn the fires out. Police were also called in to sedate the riots.

Ever since the crisis began, the EU has been wringing its hands and insisting that someone, somewhere must do something about all these unfortunate refugees — but without violating anyone’s human rights, of course.

(AGI) Brussels — The EU said the member states most exposed to immigration can’t be left to tackle the emergency on their own.

Presenting a document prepared by the EU Commission defining a common policy on immigration, EU Commissioner for Home Affairs Cecilia Malmstrom said the EU can’t leave the member states most exposed to immigration from North Africa to deal with the current emergency on their own. Malmstrom acknowledged that some member states are more exposed than others to a massive inflow of migrants and that the situation can’t be dealt with only at a national level. [emphasis added]

What the EC means is that Italy has had to bear the brunt of the invasion up until now, and that France has done its best to make sure that the new arrivals stay penned up in Italian camps.

But the French are having mixed success in their efforts. A group of refugees was rounded up, and then released again by the local judiciary. According to Liberation, via Presseurop.eu:

Liberation devotes its front page to Tunisian migrants landed in Italy in recent days and detained in France. Dozens of the migrants, arrested by French police after crossing the French-Italian border, were freed this weekend after appearing before the “liberties and detention” judge (juge des libertés et de la détention). In Marseille in particular, 35 have been released while the prefecture is requesting permission to prolong their detention in order to return them to Italy or Tunisia. The court ordered their release due to the procedural errors made by the police during the mass arrests. “The swelling of muscles ends up in a judicial rout”, comments Libération, questioning the “meaning of this debacle” which contradicts the thundering declarations of the French authorities. The newspaper quoted the analysis of one of the French lawyers for the Tunisians: “This may be a purely political move. They show their muscles to please public opinion, and make some arrests for the media, even if they lead nowhere.”

The above incident occurred in Marseille, which is the most Islamized city in Europe, with the possible exception of Rotterdam. The article gives us no indication whether the Mohammedan domination of the city played any part in the release of the migrants. Are any of the judges Muslims? Do they have to fear for their safety if they offend Muslim sensibilities in their judicial decisions?

French readers are invited to leave additional information in the comments.

One thought on “Camp of the Saints: The Shape of Things to Come”