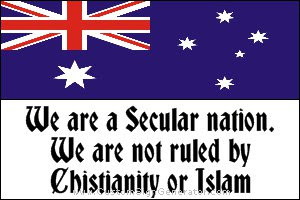 Thousands and thousands of Australians are fed up with Multiculturalism and the resulting Islamization of their country. An umbrella group of Counterjihad-minded people Down Under has decided to let their feelings be known with a march in Melbourne on May 15th.

Here’s the word from the International Civil Liberties Alliance:

Counterjihad Demonstration Approved For Melbourne Australia On Sunday 15 May 2011

Our Liberties Alliance agents in Australia inform us of positive developments down under as the Australians begin to wake up to Islamisation and sharia evil.

“Bring your banners and bring your flags be loud and proud and let the Islamic extremists know we aren’t gonna be another Europe. This is Australia and no one will take that from us!!!!!”

Join Australian Defence League Free Forums to get more details, and tell the organisers if you are going so they can give the local police an idea of numbers so that they can help facilitate a peaceful demonstration.

If you’re in Melbourne or within a few hours travelling distance, get yourself down there for the demo on 15 May. It is time to pull yourself away from your keyboard and take to the streets. That is the only way to make your Government get real. The EDL have done it in England, Aussies can do it too! Aussies have steel in their veins just like the English. It is time to stand up and be counted!

Do your bit for the global Counterjihad! The time is now and the person is you!

10 thoughts on “The Counterjihad is Marching in Melbourne”