Our Dutch correspondent H. Numan, who has been covering the Geert Wilders trial so lucidly for the last couple of weeks, contributes the following overview of the case and its larger ramifications.

Freedom of speech or freedom of religion?
by H. Numan

It seems that quite a few readers have lost track of what exactly is going on during the Wilders trial. The issue at stake is on what basis our society will come to rest: which is more important? Freedom of religion, or freedom of speech? Not just in The Netherlands, mind you. This trial has much broader consequences.

Let me start off by making it easy: freedom of speech does not mean you have the freedom to shout “FIRE!” in a cinema, for example. There is ample jurisprudence on that one. Freedom of speech has its limitations. You have the right to say what you feel about any religion, but you may have to clarify that in court. Again, there is ample jurisprudence about that topic as well. 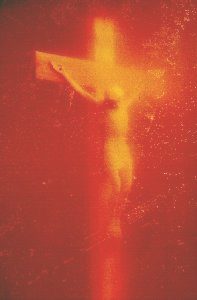 There is a current trend, both in Europe as well as in the USA to give freedom of religion far more importance than it actually deserves. That is what is at stake. Currently, someone put an image of Jesus in glass of urine, as an art form. Utterly tasteless, I fully admit. But it falls completely under freedom of speech.

I understand that some (not even that many) Christians are offended. None of them is burning down art galleries, beheading artists, or killing other Christians to show their dislike. That is in stark contrast with mohammedanism, which would go completely berserk if an artist were to place a koran in a jar of urine. They’d happily kill any number of people, including their own, to show their fury. It doesn’t matter at all where the artist lives: be it Nova Zembla, Antarctica, or anywhere between.

This has already happened many times. Offend mohammedanism — anywhere on the world — and we will take revenge. Terry Jones burned a koran, in America. Which is well within his constitutional right to do. It was not (yet) possible to kill that infidel, so they went berserk in Afghanistan. Much easier to do there anyway. Not that easy to kill infidels, sadly. Most infidels in Afghanistan wear flak jackets and carry M16s. So they picked a few of those that don’t and a large number of mohammedans as well. About 24 people killed altogether, as I recall.

The reaction is Chamberlainian: We have to change our laws, in order to compel to their religious beliefs. That is the world on its head. But many politicians will happily appease themselves into dhimmitude. The Dutch government is doing that right now, actually. All for oil…

That seems not unreasonable, until you read the charge, and see how this circus progresses. The DA did not want to prosecute, because he considered it an impossible case to win. The court had to order the DA to do so, which he then unwillingly did. His demand was release from prosecution. A DA can do that. Normally, the court would by then understand that the case is utterly hopeless and dismiss it.

However, this is a purely political trial. Make no mistake about that. The court did order the prosecution to proceed, and put Wilders on trial. Fortunately, Wilders is defended by the best lawyer in the country. The first trial was dismissed into a re-trial. Not unprecedented, admittedly. However, this particular outcome was absolutely unheard of. Certainly in a trial of this magnitude.

If you had watched the judges blunder along, the DA making a fool of himself and most important: if you had seen the complainants utterly misbehave and show their unprofessional hatred, you’d be disgusted. This was not a trial, this was being put on the stake. If the court had any decency, as one might expect from a court, it should have ordered all the complainants inadmissible. 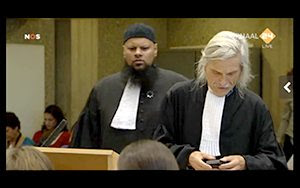 One of the councillor-complainants was arrested the day after the trial for climbing over a fence into a military facility. The man is a professional hippie (with filthy hair and ponytail), but he’s pushing 60… He behaved exactly like that in court: as a hippie high as a kite on grass demanding that his (unreasonable) demands be met. Not professional at all. An angry fishmonger would have presented his case more clearly and less revoltingly. Another one already showed his blatant hatred for the entire legal system (in which he actually works) by appearing with a muslim headdress and refusing to remove it. (One is not allowed to wear funny hats in Dutch courts; only a magistrate has that privilege.)

So now we see the Wilders-show Part II: “The hanging continues”.

Wilders must be found guilty. Anything goes to get his head into the noose. After the murder of Pim Fortuyn, having him popped by accident is rather difficult to do. Although the murder of Fortuyn was all too obvious, the organizers got away clean. I doubt if they can do it again. Nobody would believe for a minute that Wilders had been murdered for the sake of poor baby seals. (The murderer of Fortuyn claimed to have murdered him for animal welfare.)

So we have to open the dirty tricks book, and see what we can use. The phone call for Moszcowicz was a set-up. He didn’t fall into it, but barely so. Only after seeing the entire clip second by second, many times, did I begin to understand the set up. It was very cleverly done. If you watch the clip just once, you won’t spot it. Certainly not if you don’t understand Dutch. Because the whole trick was linguistic.

What many people — amongst others minister Piet Heijn Donner — do not understand is that shariah law does not have to be implemented as one single package. Muslims would be perfectly happy to see it become enforced in little steps. Piet Hein Donner made himself ridiculous in the previous government by stating he saw no problem with Shariah law, provided it was democratically approved. 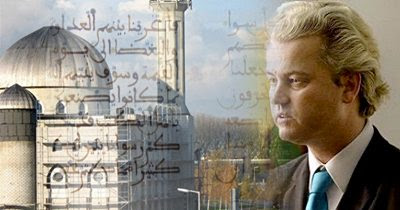 Sheer ranting nonsense: that implies he has no problems with gas chambers, either, or cannibalism, provided a legal majority (in both parliamentary chambers) approve of it. Of course that’s impossible. But the big difference is that shariah law can be applied without even changing the constitution at all. If I can understand that, why has the minister of justice such a hard time understanding this? He has a much better legal training then I’ll ever have.

Nobody will ever come up with a shariah book of law and propose that it become Dutch law in parliament. First both houses must approve, then both must be dissolved, after new elections the matter is put to both houses and only then would shariah law be Dutch law. It won’t happen that way, because it never happened anywhere on this planet that way. Yet, the minister seems to think so.

The first step is already taken. Both in the USA and in The Netherlands. We have to make any religion more important than freedom of speech. That is what is on trial in The Netherlands, and that is why the left-wing powers behind it go full steam to get Wilders convicted. Once any religion can no longer be insulted, it’s a tiny step to forbid questioning of all religions. After all, have you ever met a fundie who is not offended by serious questions regarding his beliefs? And from there we simply enforce that new law, but only to the maximum when the religion is mohammedanism. After all, mohammedans have no problem at all insulting any other religion. They do so daily.

It seems so innocent: in order to protect innocent lives, we have to act when somebody burns any religious book. But nobody will legally act if someone places a crucifix in a jar of piss. Cover a koran with bacon, however, and it’ll be the electric chair for you. Maybe not today, but it is well on its way.

17 thoughts on “Freedom of Speech or Freedom of Religion?”