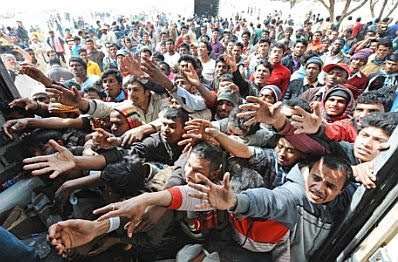 The island of Lampedusa, where most of the North African refugees arrive, is too small to hold more than a few thousand without grave overcrowding. The Italian government periodically empties the camps and relocates the culture enrichers to Sicily or the Italian mainland.

The first hijra for the migrants carries them to one of the islands, and the second to a larger and more permanent camp. The refugees do not stay long, however: they attempt a third hijra by escaping from the camps and heading for the French border and points beyond.

A thousand enrichers were evacuated from Lampedusa today and are headed for various destinations further north. According to AKI:

Lampedusa, 20 April — (AKI) — One thousand migrants from North Africa set sail from Lampedusa island on Wednesday, headed for detention centres on nearby Sicily and the Italian mainland.

Most of the migrants are asylum-seekers who reached the tiny southernmost Italian island late on Tuesday aboard a fishing hulk after setting sail from the Libyan coast.

The Italian ferry ‘Flaminia’ will take some of the migrants to centres in the Sicilian port city of Catania, and Crotone and Bari, respectivly in Italy’s southern Calabria and Puglia regions.

Bad weather prevented other migrants landings on Lampedusa Wednesday, but 36 Tunisian migrants reached the Italian island of Pantelleria, which lies about 70 kilometres from the Tunisian coast. They had been abandoned at sea by the people smugglers and were due to be transferred to the western Sicilian coastal city of Trapani on Wednesday.

Gaddafi may have decided to allow the people traffickers to operate in retaliation for international support for rebels who have for two months been trying to end his 42-year rule in Libya, Frattini claimed.

The rebels’ Libyan National Transitional Council would provide Italy with evidence on whether “the Gaddafi regime was starting to organise the trafficking of human beings, as it had threatened to do, from that port,” Frattini told a committee of Italy’s lower house of parliament.

The passengers aboard the Libyan boat that reached Lampedusa Tuesday included 50 minors including a newborn baby and around 60 women, several of whom were pregnant.

Many hundreds of migrants have drowned in the treacherous waters of the Channel of Sicily this year alone.

Over 26,000 migrants — mainly Tunisians — have reached Lampedusa from North Africa since January, amid the turmoil that has rocked the Arab region.

Italy has issued tens of thousands of migrants with temporary visas allowing them to travel around much of Europe, angering France, where many say they want to find work.