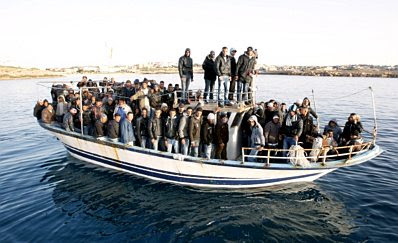 Today’s news about the migrant crisis in Southern Europe covers a lot of ground.

First of all, a reminder of what happens to European cities when culture-enrichers arrive in sufficient numbers. From AGI:

Fight Breaks Out Between 2 Tunisians in Genoa

Genoa — When they landed in Lampedusa, two 26-year-old Tunisian nationals caught up with a friend in Genoa. Their fellow national has legal residence status in Italy; he was their “contact” in Sampierdarena, Genoa’s industrial area. Last night, however, for reasons as yet unbeknownst to the police, the 3 friends and a fourth Tunisian man began to fight and eventually came to blows. The brawl broke out at 4 a.m.; local police rushed to the spot and arrested all four men.

Notice that the “contact’s” legal status was so exceptional that the reporter thought it necessary to highlight it.

The conflict between Italy and France over the migrants seems to have been pushed into the background for the time being, possibly due to the recent Franco-Italian agreement on joint immigration patrols in the Med. Germany is another matter, however: the German government seems very concerned that a surge of immigrants may pour into its own territory.

Germany’s criticism of Italy has become more blunt, and its interior minister has finally come out and said it: “Italy has to resolve its refugee problem on its own.” So much for European unity.

From The Winnipeg Free Press:

Berlin — Italy on Sunday urged its European partners to share the burden of the thousands of migrants reaching its shores from North Africa during the region’s upheavals, but key German officials rejected the request for help.

“Italy has to resolve its refugee problem on its own,” German Interior Minister Hans-Peter Friedrich told daily Welt’s Monday edition.

Rome’s newly stated policy of issuing visas to migrants from North Africa amounts to a violation of the European Union’s Schengen rules for visa-free travel across most of the bloc, Friedrich was quoted as saying. He vowed to bring up the issue at an EU interior minister meeting starting in Luxembourg on Monday.

Germany is even threatening to institute border controls if the Italians don’t behave — an action that should be illegal under the Schengen Agreement. But Germany and France are able to exempt themselves from EU laws whenever it seems convenient — they’re the Big Boys on the playground, so they can set the rules of the game:

Herrmann of Bavaria state, which borders Austria and is a possible transit route to northern Europe from Italy, was quoted in Welt’s Sunday edition as saying that Italy “has to deal with its immigration problem itself and may not dump it on other EU countries.”

Italy, however, is determined not to suffer alone:

But Italy’s foreign minister insisted that the influx of illegal immigrants from northern Africa, which has brought 20,000 Tunisians to Italy’s shores in recent weeks, is indeed a European problem.

“We want to tell Europe that economic contributions are not enough, political action is necessary,” Franco Frattini said on Sunday, defending the decision to issue temporary permits in comments he made on Sky Italia.

Meanwhile, illegal immigrants kept arriving at Lampedusa island, with a boat carrying 50 people arriving at midday Sunday. Italian police also have spotted two more boats on their way, carrying a total of about 300 people, he said.

Here’s the largest concession the Germans are willing to make:

In a small gesture of solidarity, however, Germany’s Interior Ministry said Friday that Berlin is offering to take in 100 North African refugees who are currently on Malta.

The Christian Democrats are pushing strongly to keep those annoying Tunisians out of the country:

The Italian government’s plan to issue temporary permits to thousands of Tunisian refugees, allowing them to travel to other EU countries, has prompted calls from members of the conservative camp for tougher checks along Germany’s borders.

“We will not accept the Italian government simply declaring the Tunisians as tourists as a way of pushing them into other countries,” Hermann told the paper.

The Bavarian interior minister said he expected Italian Prime Minister Silvio Berlusconi to take care of the influx himself and not pass the buck to other EU nations. He added that Italy is a country large enough to take in 23,000 Tunisian migrants.

Here’s the rationale that makes everything nice and legal:

“Only 10 percent of them have filed an asylum application,” he said. “The majority are economic refugees. That is something completely different than in Libya, where people are fleeing a civil war.”

But remember: the EU has already told Italy that it cannot turn the boat people away. The Germans can keep them out, but the Italians are not allowed to send them home unless they are really, really bad.

Prime Minister Berlusconi is confident that Chancellor Angela Merkel will change her mind:

Berlusconi: Merkel Sure to Admit Emergency

Rome — Silvio Berlusconi is “certain that Chancellor Merkel can only agree on the need for a shared EU policy” on immigration. The Italian Prime Minister stated as much during a press conference in Lampedusa, Sicily. The German government’s stance is perhaps motivated “by internal reasons” says Mr. Berlusconi, “but in the end a comparison must be made with reality” he added.

While all the diplomatic wrangling continues, the migrants keep arriving on the island of Lampedusa. The Italian government moves them to the mainland as quickly as it can, with the camp in Manduria being a frequent point of relocation. The authorities have just issued a new batch of temporary residents permits, which is probably what is worrying the Germans:

Permits on Wednesday for Refugees in Manduria

Taranto — A first batch of 100 or so residence permits will be given to refugees present in Manduria camp (Apulia region). Bureaucratic procedures have almost been completed after Italian police finished collecting identification for those who landed in Lampedusa and were then taken to Taranto via ship before arriving in Manduria. Meanwhile new times for exiting and returning to the camp will be enforced as of tomorrow: 9AM-12PM and 2PM-7.30PM. The measures aim to contain the to and fro of refugees to Oria, a city a short distance away from the camp and the refugees’ favourite destination in recent days.

The most interesting item concerns Italy’s intention to withdraw its peacekeeping contingent from Lebanon to help deal with the refugee crisis:

Calderoni: Italians Out of Lebanon to Aid Migrant Issue

Rome — Minister Roberto Calderoni said that he was going to propose to the cabinet the withdrawal of the Italian contingent to Lebanon to help resolve the illegal migrant emergency now facing Italy. “The Northern League’s answer to the illegal migration issue, because of the problems in North Africa,” Calderoni explained, “can be summarized in three points. We help them in their own country, we empty the bath and turn off the tap, which unfortunately, is still dripping.”

I haven’t seen any indication that Italy intends to pull troops out of Afghanistan for the same reason, but I assume that’s a possibility if the situation continues to deteriorate.

The boat people are causing real economic damage to Lampedusa as the tourist season begins in earnest:

Lampedusa — The head of tourism for Lampedusa and Linosa, Peter Busetta, expressed doubt that the season could be saved.

He explained: “We hope that the optimism of the Minister Brambilla is confirmed by the facts. We are much less confident that the season can be saved although we would like to be proved wrong. As long as the message transmitted through the ether is one of landings on the island bookings for the summer are unlikely to pick up.”

He continued: “For the time being operators tell me that there are only cancellations and I am hearing the concerns of those who hoped that the advance payments for 2011 would pay off debts accumulated in the winter for investments. However, to understand the gravity of the problem we just have to listen to the tour operators who are wondering whether to cancel the summer charters.”

The local council is asking for “what the prime minister promised, namely that arrivals are put directly onto support ships already at anchor in Lampedusa. It is also asking for an advertising campaign to say that immigration is now back to normal, no longer visible on the island and will not prevent people from enjoying a peaceful holiday in Lampedusa.”

Busetta concluded: “Someone said that the Lampedusa tourist season has already begun, with hotels full of soldiers. However, many are still closed and so the few that are open are indeed full, but in any case this is not the kind of tourism that the island wants and we consider the income from this similar to mainlining on a drug. We want real tourism of people walking, spending, travelling around the island, renting scooters, cars and boats, buying souvenirs, going to restaurants not at the price set by the ministry and who pay cash immediately rather than later via tortuously slow bureaucratic procedures. And above all, we want the type of tourism that spreads prosperity throughout the island and not just to a few hotels.”

On a final note, the agreement between Italy and Tunisia to keep the migrants at home (or at least in Tunisia) involves a lot of Italian help on the ground in Tunisia. The following article from ANSAmed describes the efforts of the Italian Red Cross in one of the refugee camps in Tunisia:

Rome, April 7 — The Italian Red Cross has opened a camp in Ras Jadir, Tunisia, 8 km from the Libya border. The structure, adjacent to the Transit Camp, is managed by the International Red Cross and Red Crescent and the Tunisian Red Crescent, and covers a surface area of 5000 square metres.

The camp includes a kitchen where up to 4000 meals per day can be prepared. The first 150 people arrived yesterday. Most of them are Eritrean and Somali families coming from Libya. The water purification system is also operational: Italian experts designed a special treatment to make the salt water completely drinkable, after analyzing water samples taken 20 days ago. The installation has a capacity of 5000 litres of water per hour. It can also be used by other humanitarian organisations in the area. Team leader Emerico Laccetti explained that the water in the entire region is salty, which could harm people’s kidneys.

There are hundreds of thousands of refugees from Libya, Tunisia, Egypt, and countries further south jammed into camps on the Libyan-Tunisian border. Keeping them where they are is a critical political necessity for the Italian government.

Something has to give.

One thought on “Camp of the Saints: Sunday Roundup”