Back in 1961, Pablo Picasso drew this iconic image, “The Dove of Peace”:

Fifty years later the Swedish artist Lars Vilks, creator of the infamous Modoggies, has made his own contribution to the cause of world peace by drawing another peace-loving animal, “The Dog of Peace”: 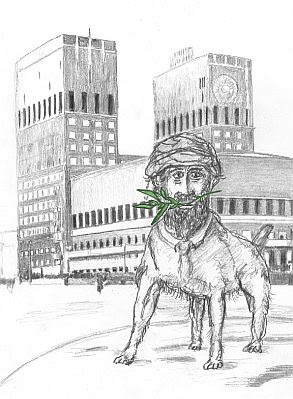 
The occasion for this latest work is today’s announcement that Mr. Vilks has been nominated for the prestigious Nobel Peace Prize. The drawing above is his depiction of the Peace Dog with Picasso’s olive branch, standing outside the Rådhus in Oslo, ready to receive the prize.

Below is a news report on this historic occasion from UPA:

Since he first published his drawings of “The Prophet as a Roundabout Dog” in 2007, Mr. Vilks has been repeatedly harassed, threatened, and assaulted. He has also been the target of an assassination conspiracy that included the infamous “Jihad Jane” as one of its alleged conspirators. Despite all these hardships, he has remained dedicated to the cause.

“The basis for Lars Vilks’ Nobel nomination has been his remarkable success in furthering the causes of peace and human rights,” stated the release from his support group.

According to the website for the five-member Nobel Peace Prize Committee, which is located in Oslo, Norway, their letters of nomination, names of nominees, and other information about nominations cannot be revealed to the public for 50 years. The committee reportedly sends out 1,000 letters each year inviting qualified people to submit their nominations.

“Even though the nominations are not revealed, we have it upon good authority that Lars was nominated this year,” his cousin and chairperson of the LV-DOC, Tamika Lateef Carlsson, told UPA.

The Nobel committee will cut their list to 10 names later this month, and will announce the winner in mid-October. Ms. Carlsson said they have not been told if Mr. Vilks has made it to the short-list. “We’ve never been able to find that out,” she said.

A 2010 letter to the Norwegian Institute from a former member of the Ladonian Parliament, Osvald Lagerhus, has surfaced on the Ladonian Independence Movement (LIM) website in support of the artist’s nomination: “The Nobel Peace Prize in my view is the only key that can fit the lock to rehabilitate Lars Vilks. All the aboriginal artists of Ladonia await his elevation.”

The LIM website mentions several projects that Mr. Vilks has worked on since going into seclusion nearly four years ago, such as playing a role in getting people from different genders and species to come together as he advocates for peaceful resolution of all artistic issues.

It is also estimated that Mr. Vilks has raised millions for charities through sales of his art work.

In his 2009 manifesto “Writings from Ladonia: My Life is my Lawn Chair,” Mr. Vilks states: “We are all in this together — the rich, the poor, the dogs, the pigs, the Red, the White, the Pink, the Green, and the Purple. I believe in the good of all animal kind.”

6 thoughts on “The Dog of Peace”