Live-blogging is now officially closed. Reports on today’s events in Luton will be posted separately as follow-ups. The first one will be along shortly. 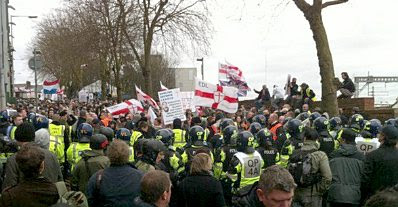 This is the live-blog for the EDL demo in Luton. Updates will be added to the top as the day wears on.

The speech given by Elisabeth Sabaditsch-Wolff is here.

Tommy Robinson interviewed by ITN before the demo: 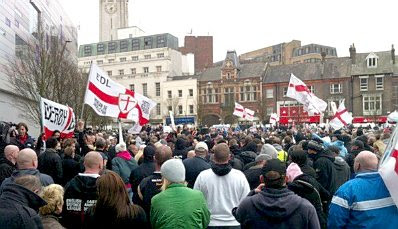 English Defence League (EDL) 6 coaches 9 minibuses and thousands on the trains and cars at least 6,000 in attendance in Luton today well done to all attendance we will never surrender we will only grow

A video from overhead (hat tip Nilk) of the EDL demonstrators approaching St. George’s Square. I can’t help but compare this crowd to the ones we saw earlier this week in Tahrir Square in Cairo:

BBC report about the EDL and UAF rival protests

KGS has a screencap of a UAF thug raising his hand to strike an EDL member, taken from the Telegraph video.

A video from earlier in the day, EDL marching to the demo location:

@inayatb Inayat Bunglawala
Over half of EDL crowd has already left. Very much a damp squid so far. Let’s hope they go home peacefully #edl #luton

The twitter feed is interesting, as the majority of those tweeting appear to be against the EDL. One of the themes is the lack of numbers — anywhere between 1500-3000, but both of those are still good numbers.

Especially when you consider the police presence, and the usual disparaging media lead up to it all.

Mr. Bunglawala doesn’t seem too happy that on the whole the demo’s been peaceful. Usually people complain about the headkicking. I guess this time it’ll be the lack of headkicking.

@counterfireorg Counterfire
by Biggervoice
#Counterfire reporter: #Luton: We’re kettled. #EDL allowed to march. 3,000 of them including supporters from Germany and Spain #UAF

Julie Simpson Just spoke to someone watching her, he said she’s amazing 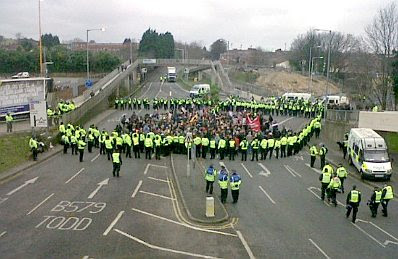 Article in The Telegraph

I’m not sure where this report originated:

Jon Doe UAF supporters understood to be trying to break through police cordon to reach EDL crowds in St George’s Square. Being ‘pushed back hard’ according to radio. 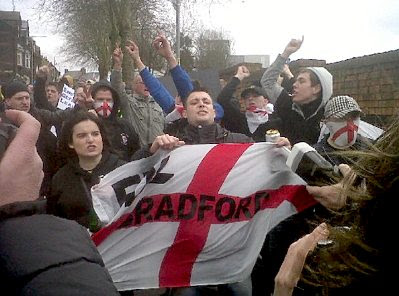 Guardian journalist tweeter on the march so far:

mrmatthewtaylor: Best organised and biggest #edl demo I’ve seen in luton today. Feels like a movement on the rise

@LutonVoice Luton Voice
UAF are not wanted in Bury Park. Muslims send them on their way #EDL #Luton

From the EDL: updates are being posted on Facebook by EDL on the ground. 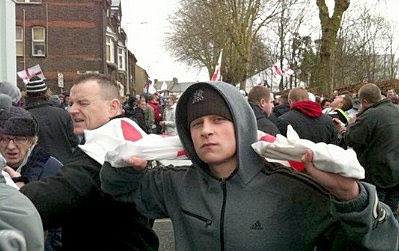 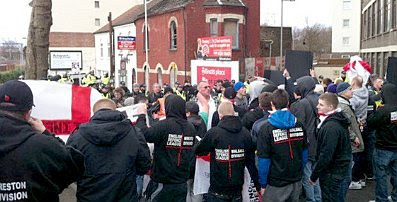 The EDL live feed is here.

Tweets from Nick Lowles, leader of “Hope Not Hate”:

Other video will be coming later, perhaps several hours from now.

3 thoughts on “The EDL Demonstration in Luton”