Elisabeth Sabaditsch-Wolff was one of the speakers at today’s EDL demonstration in Luton. Her report on the day’s events is below.

The text of her speech may be read here. 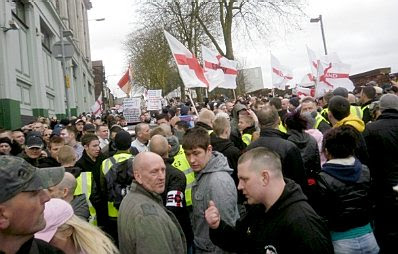 A Day for the History Books
by Elisabeth Sabaditsch-Wolff

I am on my way home at the end of a day that will eventually find its place in the history books in the United Kingdom, and perhaps even in the rest of (free) Europe. What began two years ago with a small march protesting the Islamization of Luton has today culminated into a demonstration by nearly 6,000 people.

This demonstration, organized by the English Defence League and headed by its leader Tommy Robinson, brought together activists and protesters from all over the United Kingdom, Norway, Sweden, Holland, Germany, France, and Austria. There were men and women from all walks of life, young, old, students, laborers, mothers, fathers, tattooed football hooligans drinking beer after beer and chanting “We will never surrender” and singing “God save the Queen”.

There were veterans from the war in Afghanistan (“I am very disappointed in my country; I feel my country has let me down. There is no aftercare for those who have returned unscathed.”). There was a young man whose brother has just survived a mine blast in Afghanistan and felt he needed to show his support. There was also a Pakistani woman of Jewish origin who converted to Christianity a few years ago.

Most of all, there were those who came to voice their anger. And there was a lot of that anger. It was in the air, and could be felt very clearly.

Walking around the street where the protesters gathered, I looked into the faces of these lads, trying to find what the press keep describing as “hatred”. But I was unable to find any. The mood was a somber one, despite the high beer consumption, and the reason for that mood had a simple explanation: native Lutonians no longer recognize their own city. There are Muslim gangs running the streets, harassing women and girls. There is a city council which caters solely to the Muslim groups, giving in to their every demand, the latest one being — no surprise here — a mega-mosque to be built in the very near future. The Lutonians are no longer Lutonians, but strangers in their own city, the place where they were born and grew up.

And, perhaps most dangerous, they are no longer even heard by their elected officials. Instead, members of the EDL are branded as racists for saying they want England to remain English; for complaining about their children being served halal-slaughtered food in their schools; for not wanting shariah law to be established in Luton or anywhere else in England. 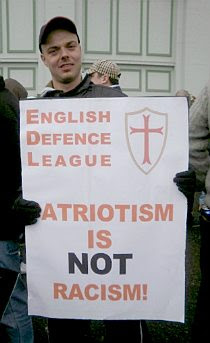 These brave men and women do not deserve to be labeled “racists” for defending their home country. In a normal world the otherwise silent majority would be lining the streets applauding them for their bravery, and thanking them for standing up for their hometown. But in today’s warped world, they are called “racists”, “xenophobes”, “fascists”, and many other less polite epithets.

Rabbi Nachum Shifren — who traveled to Luton all the way from California — and I were able to engage some of the press in discussions. The BBC appeared hopeless, as usual, with its reporter telling me, “But you can find all that in the Old Testament as well!”

Or the Reuters journalist who still believes that Islam can be reformed. I treated him to a short explanation of the closing of the gates of ijtihad. In any case, he failed to notice that if Islam is indeed in need of reform, then there is in fact already a major problem.

As the street filled with hundreds and hundreds of protesters waving their EDL flags and chanting their slogans, I made my way to the front of the demonstration. I was surprised to find these boys extremely friendly and charming when I asked them to make way for me. Some of them even recognized me and thanked me. Their kindness was unexpected and very welcome. However, I was even more surprised that, given the per-capita beer consumption, there were no outright drunks to be found. Yes, some may have been tipsy, but I did not feel threatened in any way. We were in agreement that we would rather have drunk Englishmen than Sharia imposed on England. 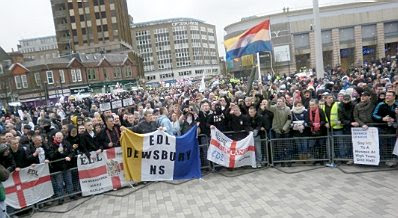 At 2 pm the march started. The push from behind was no longer containable; people wanted to move and express their anger and disappointment. The police were out in full force riding on horses. There were riot police with walkie-talkies and protective visors as well as the evidence-gatherers. Given the stories I had heard about their treatment of the EDL in the recent past, I was happy to see the indifference in the faces of the policemen and women. They were certainly cooperative and courteous, and they made me feel safe. Assisting the police was a massive force of EDL stewards, who appeared to have the situation under control.

One rather tense moment occurred when we passed beneath a bridge and there was shouting and commotion. “Traitor, traitor, we know you are a traitor,” some of the EDL lads shouted, and appeared to kick out a man who had infiltrated.

The march continued without further incident through the deserted center of Luton to St. George’s square, where a podium had been set up for the speakers. The square filled quickly with thousands of marchers and protesters waving their flags and chanting “E-E-EDL!” 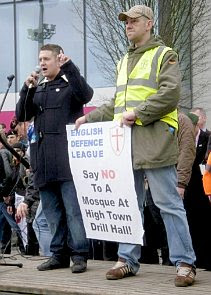 Tommy Robinson then took the stage and gave one of his most engaging speeches, calling every member of the audience a hero for attending this rally. He also promised to resist the building of the proposed mosque in Luton. Tommy then introduced a mother whose story moved many of those hard boys to tears. She had lost her daughter to a Pakistani who had abducted her with his car, had an accident, and ran away leaving the car to burn, with the girl inside. What is especially monstrous about this is that this Pakistani man lied to rescuers about the presence of the girl inside the burning car, leaving her to burn alive. This man is now in prison, but due to be released soon “on good behavior.” The booing emanating from the crowd was loud and clear. Tommy promised to do everything in his power to prevent this man’s release. The mother then added that she has received a life sentence, and so should the Pakistani man.

It was hard for me to take the stage after this moving story. But my speech was very well received, and I was proud to be standing there in support of a grassroots movement. There was no violence that I was aware of, just as I had hoped.

And immediately after my speech I was whisked away by some bodyguards and escorted personally by Tommy to Warren, his uncle, who had kindly volunteered to drive me to the airport.

It was a huge honor to have taken part in this memorable day. I met many kind and engaging people, people so different from me, but who all share my vision of a sharia-free society. And I intend to support this group for as long as it takes for us to win.

8 thoughts on “ESW: A Day for the History Books”