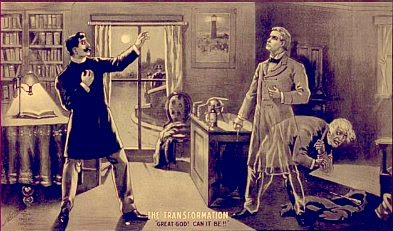 Dymphna and I spent a pleasant afternoon yesterday at the birthday party of an old friend who lives not far from us. Most of the guests were people of a certain age whom we have known for many years.

In normal circumstances, when we crawl out of our Counterjihad den into the full light of day, there is no overlap between our doings here at Gates of Vienna and the people we meet in the real world. The shameful secret of what we do here in the dark in front of our demonically glowing computer screens is not something we have to share.

But yesterday we were celebrating among friends, some of who are fellow conservatives who know exactly what Dymphna and I do when we’re at home. Nevertheless, most of the rest of the guests were liberals of varying degrees in their political views; revealing our Islamophobia would not have been conducive to a pleasant and festive atmosphere.

However… One of our good friends is a regular reader of Gates of Vienna who agrees with us on matters political, so discussing political topics (including the jihad) with her is all but irresistible. She and I ended up standing in the kitchen talking about Yusuf al-Qaradawi, the Muslim Brotherhood, and the political upheavals throughout the Middle East. Fortunately for us (and for the rest of the party), most people within earshot had no idea who Qaradawi was, so our discussion was able to remain in the virtual shadows.

And there are always so many other things to talk about — mutual friends, children, grandchildren, gardening, food, wine, the local historical society, etc. We veered off into other topics, and the afternoon remained unmarred by political contention, much to Dymphna’s (and our hosts’) relief.

My job has trained me keep my head down and my opinions mute when socializing with people I don’t know very well. The big exceptions, however, are those delightful occasions when I attend anti-jihad events both here and abroad. That’s when I can let what’s left of my hair down and discuss the Great Jihad just as I do in this space.

There have, however, been times during a conversation in a crowded restaurant, or a taxi, or an elevator when I have said to myself, “Hmm — should we really be saying such things about Islam here at the top of our lungs?” We all tend to forget that we’re no longer having a discussion in a blog comment window.

Trips to Europe provide the best occasions for free and frank discussions. American gatherings tend to have a fair leavening of those who believe in the “moderate Muslim”, so some of my opinions are immoderate by comparison. In Europe, however, the moderate Muslim is generally regarded in the same light as the tooth fairy or the Easter bunny.

Conversations in the Old World tend to be much the same as the ones we have in this space, except that they are accompanied by numerous tankards of foaming brew. Instead of skulking in the virtual shadows, we can relax and speak freely in the dimness of a local watering hole.

Many of the people I have met in person under such felicitous circumstances are among those donors whose generosity has been expressed in this fundraiser, and we owe them a debt of gratitude.

To the rest of you whom I have never met: thank you! You have chosen to give money to a stranger, and your faith in us is greatly appreciated.

Many, many thanks to all of you.

— Leonard Cohen, from “The Partisan”

2 thoughts on “A Place in the Shadows”