Elisabeth’s case has been adjourned until February 15th at 10:30am. Read Henrik’s final report for more details.

Many thanks to Henrik Ræder Clausen for the live feed and the photos, and to Tundra Tabloids for the relay.

Update: Gandalf’s French-language account has been posted at VV&D.

German-language articles are available at Europe News and Politically Incorrect. Dr. Rami interrupts to point out that the quiet, factual tone of the seminar demonstrates that this is not hate speech, but an educational setting going through relevant documentation.

Dr. Rami also highlights the question from the first seminar, if it would remain legal to say “Islam is bull****”, pointing out that this was not a statement of fact (visual ‘quoting’ had been used by ESW to indicate this). The relevant seminar recording is selected to be played next.

Back to the seminar tapes. Euro-Islam is discussed. “Muslims hate us”. Elisabeth is heard saying: “Who here would dare go in the street with a sign: ‘Islam is Bull****!’?”

The judge discusses the charges, and the statement that the conduct of Muhammad is exemplary for Muslims, including the problem of Muhammad marrying a six-year-old girl, and what exactly that would be called today, if not paedophilia.

Dr. Rami interrupts the playback, pointing out that the purpose of playing the tapes has been accomplished, namely demonstrating that the sessions were scholarly, thoroughly documented, and in no way constituted “incitement to hatred” or similar.

Judge Neubauer adjourns the hearing, scheduling the next one for February 15th at 10:30.

[Reason for the adjournment, according to German-language sources:

The judge has introduced a new point: discrimination against religious beliefs. Elisabeth’s lawyer was not prepared for this.]

Update: The Judge (name not given): 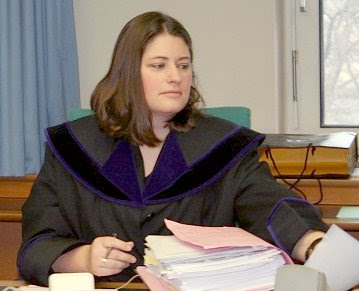 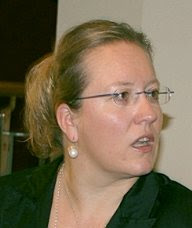 Next mentioned is Taqiyya — the permission and/or obligation to lie towards non-Muslims when doing so will further the cause of Islam. Quran, Bukhari and Muslim scriptural references are given for this. Also described in detailed in Reliance of the Traveller chapter 8.

Dr. Rami interrupts, asking for a clarification of the relevance of this passage. There seems to be a difference from the transcript. PowerPoint presentations are brought out to clarify.

The religiously-sanctioned lying is difficult for our politicians to handle. It is not clearly described in the Quran, is mainly based on Hadith, drawn on Muhammad’s tactics against his enemies.

Some discussion with the audience follows. References are made to a variety of Quran verses, and the principle of abrogation in Islam. 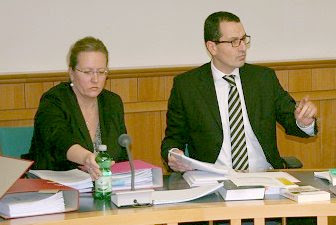 Some 30 persons are present, including several journalists and Austrian television.

Defence hands over the translation of relevant parts of Reliance of the Traveller. The judge verifies basic personal facts about ESW, then proceeds directly to playing the seminar tapes. Noise is quite audible in the recordings. This goes to the heart of our problems with terrorism and Islamic fundamentalism, and will be reproduced in part here.

First issue taken up is the Muslim Brotherhood and its extensive political influence in Austria and Europe, and their desire to implement religious rule (Sharia) where possible, and the use of terrorism to pursue this objective. The lamentable lack of strong, moderate voices from Islam.

The Hadith is quoted, for it consists of what Muhammad did and said, the ideal for pious Muslims and the foundation for Sharia law, which basically codifies Quranic commandments and behaviour described in the Hadith into what is today Islamic law.

ESW: There is no Islam without Sharia, that cannot be separated. Sharia-based societies have been known for many centuries, and still exist today. The aim is to establish an order of society similar to that Muhammad had decreed and exemplified. The ultimate aim of Islamists today remains the same: to implement Sharia as widely as possible, ideally throughout the world. Sura 9:5 is an example of these:

Then when the Sacred Months (the 1st, 7th, 11th, and 12th months of the Islâmic calendar) have passed, then kill the Mushrikûn (see V.2:105) wherever you find them, and capture them and besiege them, and prepare for them each and every ambush. But if they repent and perform As-Salât (Iqâmat-as-Salât), and give Zakât, then leave their way free. Verily, Allâh is Oft-Forgiving, Most Merciful.

Update: Henrik’s report from just before the trial:

9:14: It’s a hazy day in Vienna, and we’re awaiting the start of the second hearing in the case against Elisabeth Sabaditsch-Wolff, who is charged with ”Inciting hatred” and ”Denigrating the teachings of a recognized religion” in her seminar to FPÖ about political Islam.

At the first hearing on 23rd November 2010, the basic charges were laid out, with the prosecutor quoting a few passages as foundation about the case, followed by ESW and her lawyer detailing the context for what was said, supplying details and sources for each.

Also the journalist from NEWS.at, Dolna, was present at the first hearing, where she was permitted to witness for the prosecutor, in spite of her not being called to do so. She was asked to explain various issues of her original article, including the reasons for attributing quotes from other people to ESW, and her use of remarks during the breaks as if they were parts of the seminar. She quoted ”Dramaturgic reasons” for doing so.

The current issue of NEWS.at has a follow-up to their original article, with references to the FPÖ chairman Heinz-Christian Strache supporting ESW. The article notes that in this hearing, actual evidence in the form of recordings from the seminar will be presented, stating that this is probably a bad idea for the defence.

We are certainly looking forward to actual evidence being presented, as not even the prosecutor had gone through the original evidence in the first hearing, relying instead on the transcript provided by NEWS.at. A certified German translation of select passages of Reliance of the Traveller has been prepared by the defence, to document that the interpretations provided by ESW are indeed in line with canonical Islamic law.

Elisabeth Sabaditsch-Wolff returns to court in Vienna today for the second part of her “hate speech” trial.

This post has been prepared in advance for live-blogging. When I get up, I’ll check in with the other members of the team and post trial-related news and information here.

The trial starts at 9am Vienna time, which is 3am my time, but Elisabeth says that nothing much is likely to happen before noon (6am EST), since the playing of the tape of the entire seminar is the first thing on the schedule.

If you show up here before I do, look in at Tundra Tabloids to see if KGS has any news on the trial. Henrik Ræder Clausen will be feeding information directly from the courtroom to KGS, who will mirror it at the English-language section of the Save Free Speech website, which will also post a German version. A French translation is scheduled for the VV&D site.

I’ll add updated information to the top of this post as the day wears on. See you here whenever I can drag myself out of bed!

15 thoughts on “The Trial of Elisabeth Sabaditsch-Wolff, Day 2”