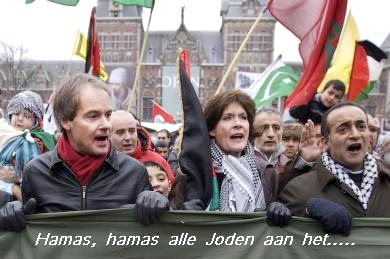 Hamas, Hamas, Jews to the gas!


In the news feed on Monday night I mentioned the controversy caused by the former VVD leader Frits Bolkestein, who remarked that Jews should leave the Netherlands because of increasing anti-Semitism. The two articles I included in the feed were brief items from English-language sources.

Our Flemish correspondent VH has compiled a much more extensive report based on his translations from the Dutch-language media. He includes this note:

What is not mentioned in the responses to Bolkestein is that the left wing is once again becoming ever more openly anti-Semitic, and justifies — or maybe even fuels — the anti-Semitism that is already present among the Muslim immigrants.

His first translation is from De Pers:

[December 5, 2010] For observant Jews there is no future in the Netherlands, says Frits Bolkestein. The reason: anti-Semitism among Moroccan youths.

“Observant Jews must realize that there is no future for them in the Netherlands,” said Frits Bolkestein, a prominent VVD member. To the newspaper De Pers he confirms his statement to this effect, as made in a recently published book by Manfred Gerstenfeld on Judaism in the Netherlands, called Het Verval [The Decay].

“With observant Jews, I mean Jews who are identifiable as such, like orthodox Jews,” Bolkestein argues. “For them I see no future here, because of the anti-Semitism, particularly among Dutch Moroccans, who continue to grow in number.”

According to the former EU commissioner they had better advise their children to emigrate to America or Israel. He has little confidence in the current plans to counter anti-Semitism, such as the use of ‘lokjoden’ — a proposal by Labour Party MP Ahmed Marcouch (PvdA). 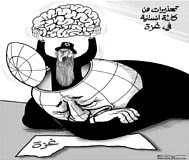 “I am pessimistic,” Bolkestein said, “because the Palestinian-Israeli conflict — which is especially focused on the West Bank [Judea and Samaria] — continues to fester. I foresee no quick solution, and then also the anti-Semitism continues to exist. Many Moroccan and Turkish young people will care nothing for the measures.” In his eyes Arabic TV channels, which are viewed here via satellite dish, are playing a bad role in that process.

The increased anti-Semitism in the Netherlands, especially after 9/11, has been high on the political agenda since last summer. There was an emergency debate in Parliament when it became known that in Amsterdam-West, a part of the city with many Muslim residents, there is a “shelter synagogue” and that many institutions — such as Jewish schools — need to be protected.

Last year the Center for Documentation and Information Israël (CIDI), counted 55 percent more anti-Semitic incidents (including threats and violence) than the year before. Incidentally, there are also indigenous offenders among them, who often entertain far-right sympathies.[1]

In the book Het Verval, a bleak picture is thus sketched. Even at Bar Mitzvah celebrations nowadays there are security guards present. A young Dutchman from Rotterdam kept a week-long diary about how he is over and over again denounced as a “cancer-Jew”. For this reason, orthodox Jews are more likely to choose not to wear their yarmulkes in public. And in some schools it is almost impossible to teach about the Holocaust because of the hostile reactions from immigrant pupils.

[December 6, 2010] PVV leader Geert Wilders criticized his former VVD leader Frits Bolkestein, for his view that the rising anti-Semitism in the Netherlands means “observant” Jews have no future in our country.

“Bolkestein is firmly wrong” Wilders twittered. “It is not the ‘observant’ Jews should emigrate, but Moroccans who are guilty of anti-Semitism!” Bolkestein was VVD-leader in the nineties when Wilders started to work for the VVD fraction. According to the biographer of the PVV leader, Geert Wilders is Bolkestein’s ‘apprentice’.

Also other MPs are aroused about the remarks of the former VVD leader. “The worries are large, but this is not the solution,” said CDA MP Mirjam Sterk. She wants to hear the views of the Cabinet on Bolkestein’s remarks.

Green Left leader Femke Halsema wonders whether Bolkestein has gone ‘bonkers’. “Endangered people are to be protected in their own country.”

Labour Party (PvdA) leader Job Cohen believes that former VVD leader Frits Bolkestein has taken “a wrong turn” if he finds that devout Jews should emigrate. “That view is exactly contrary to the Western values we stand for. We are and remain the proud nation that protects everyone against breaches his or her identity. I would say: do not walk away, never walk away, but solve the problem,” Cohen said in a reaction.

Other Labour Party members respond. “Bolkestein outlines the solution of the right-wing: if you suffer from discrimination, you had better emigrate”, twitters Labour MP Martijn Dam. PvdA MP Ahmed Marcouch argues that Bolkestein should not be so fatalistic. Jews should not emigrate, they belong to us in the Netherlands, Marcouch believes. “Get to work against anti-Semitism and with a civilization offensive.”

[December 6, 2010] “Unacceptable”, Rabbi Raphael Evers [see also on GoV: “Hitler forgot one”] calls the “emotional appeal” by Frits Bolkestein that Orthodox Jews better emigrate to America or Israel because of increasing anti-Semitism. […] Rabbi Evers, of the Nederlands Israëlitisch Kerkgenootschap (Dutch Israeli Communion, NIK), maintains that the government should work to address anti-Semitism in a better way. “There must be a very clear message from the government that anti-Semitism is not accepted, and cannot be allowed. For example, by banning hate-sermons by imams via satellite television. The Middle East conflict should not blow all the way over here.”

He says he finds Bolkestein’s remarks understandable. “There is an upward trend in the incidence of anti-Semitism. This is worrying. [see also on GoV: “Anti Semitism is Alive and Kicking”] But that does not mean we then should immediately emigrate. This is no solution and is not a demonstration of decisiveness.’’

Evers is currently in Brussels where he together with other rabbis from across Europe speaks with imams from several European countries. Monday afternoon, the imams and rabbis will meet EU President Herman Van Rompuy. “These problems are also happening in other European countries,” said Evers.

An excerpt from the website of De Dagelijkse Standaard:

The writer/editor of the newly published book called Het verval: Joden in een stuurloos Nederland [The Decay: Jews in a Rudderless Netherlands] is Dr. Manfred Gerstenfeld, who lives and works in Israel.

Dr. Manfred Gerstenfeld left the Netherlands almost forty years ago. He sometimes visits the Netherlands, and then it strikes him how the situation for Jews has worsened in Amsterdam. For instance, he was in a tram in Amsterdam in 2004 when two Moroccan boys stepped on and began to sing about Jews they wanted to kill, but were not allowed to. He noticed that this is apparently considered quite normal. Just as it is considered normal that he first has to be interrogated by the security in detail before he may enter a synagogue in Amsterdam. Which you do not need if you visit a church.

There was some confusion about the term “observant Jew” Bolkestein used in his essay in Gerstenfeld’s book. Gerstenfeld explains that this meant the Jews who live in an organized context. Most of them are religious, but that is not necessarily so. It is also not always about clearly recognizable Orthodox Jews. The feeling of insecurity among Jews in Amsterdam is widespread, says Gerstenfeld, who as a result of the ‘Bolkestein affair’ received many reports from Amsterdam Jews who agree. Out of fear of exacerbating the situation, they often prefer not to say it out loud. Very often Gerstenfeld heard Amsterdam Jews say that they think that their children had better leave the Netherlands.

And yes, what did you expect, says Gerstenfeld, when you let such one million Muslims with very anti-Semitic attitudes immigrate to the Netherlands? And while ‘dialogue’ is spoken about so often by politicians, in practice not much comes out of it.

It is also not surprising that Jews in Amsterdam took a part of their security into their own hands, by arming themselves in groups. A situation that came to light through the affair of the Dutch Jewish parliamentary candidate for the PVV, Gidi Markuszower.[2] You have to do something. And the Hague politicians continue to speak of dialogue.