Finland is an officially bilingual country, with Swedish recognized by the state as equal to the Finnish language in education and public life. There are pockets of ethnic Swedes in Finland where Finnish is hardly spoken at all.

In recent years Finland’s leaders have looked to their multicultural western neighbor for inspiration, and have pushed for more immigrants to enrich Finland with the same kind of cultural diversity that has enjoyed such notable success in Sweden. Interestingly enough, the Swedish language is being proposed as a sort of multicultural gateway for new arrivals in Finland.

KGS has an in-depth report at Tundra Tabloids on the wonders of bilingual Finland:

The Finnish state broadcaster YLE2 this past Tuesday (30.11.2010) aired a live broadcast of a studio discussion group on “mandatory Swedish”, a topic that flares up now and then in the Finnish media. Swedish was made the 2nd official language of Finland and its status is recognized in the Finnish constitution. In the 70’s the learning of the Swedish language was made compulsory in schools, so the language of 5% of the Finnish population was forced upon the remaining 95%, and the angst over that decision has remained ever since. 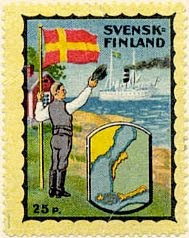 The fact remains that there exist two distinct identities in Finland, predictably, based upon the languages of both groups. Such “identity” tension will always remain between the two groups because each side will always act, in what’s deemed to be, in their own self interests. It’s a highly logical, and as I said earlier, a predictable outcome.

Now add to that mix the thought of increased mass numbers of immigrants with a plethora of languages who will be demanding their own rights to use their own languages in Finnish society. But the Finnish-Swedish speakers have a plan, a few of their number (in the live broadcast) announced their party’s intention to grab as many foreigners as possible and steer them into speaking Swedish. They made a case for the Finnish government to get involved and make it possible for immigrants to choose which language to study and to identify themselves with.

One of the Finnish-Swedish participants mentioned the fact that in the late 1800’s, Jews who were allowed to immigrate to Finland by the Russian Czar, learned Swedish, so there’s history on their side of immigrants learning Swedish and integrating into society. But what was left unmentioned, was these Jews spoke Yiddish, a dialect of German and they found it much easier to learn than the host language (at first), and that every Finnish Jew is now fluent in three languages, Finnish, Swedish and English.

It’s just in the coastal areas of Finland and in the island archipelago of Åland that Finnish-Swedes are not learning Finnish, and for the most part, have a completely different identity to that of the Finnish speakers that make up 95& of the country. So now the party of the Swedish speaking minority is actively trying to pull immigrants to its party which explains the Swedish speaking Minister of Immigration and of Europe, Astrid Thors, actions over the last few years.

This is bound to drive an even deeper wedge between the Swedish speakers and the majority of Finnish speaking Finns. It just highlights the fact that different language groups will do whatever possible in securing their future, which creates in the end, a divided society with competing goals. Hardly a recipe for a cohesive, functioning society. The video of the event (in Finnish) is still available here, for the next 30 some days.

Read the rest at Tundra Tabloids, including an overview of the official bilingual policy written by the Finnish blogger Vasarahammer.

4 thoughts on “Swedish: The Gateway to Multicultural Finland”