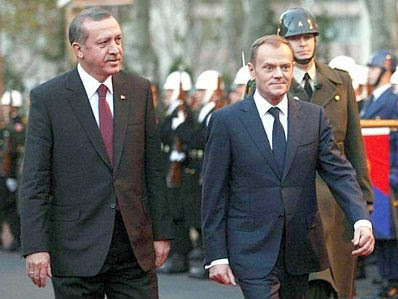 Prime Minister Donald Tusk of Poland wants to be best friends with Turkey. At least that’s what he says during his visit to Ankara.

Many thanks to our Polish correspondent M for this translation from Rzeczpospolita:

“Poland constantly works towards Turkish accession to the EU; we are the leaders in this area in Europe,” said Prime Minister Donald Tusk, beginning his two-day official visit to Turkey. He underscored that he will make attempts to hasten the accession talks with Turkey during the Polish presidency of the EU in the second half of 2011. Turkish Prime Minister Recep Tayyip Erdogan thanked Poland for its efforts, reminding his listeners that 2014 will see the 600th anniversary of the beginning of diplomatic relationship between Turkey and Poland.

Poland is a member of the Friends of Turkey Group in the European Union, lobbying for that country’s membership in the EU. Turkey’s attempts to join the EU are jeopardised by the failure to normalise relations between Turkey and Cyprus. Many countries — for example Germany, France, and Austria — stress that Turkey does not satisfy the membership requirements, such as freedom of speech, religion, equality of sexes and the protection of minorities.

10 thoughts on “Poland: A Friend of Turkey”