I closed the comment thread on one of yesterday’s posts after a series of insults exchanged among the commenters. The ad-hominem attacks were begun by a visitor named Adam Keller, who referred to the supporters of Geert Wilders as “racist bastards”. Since our blog’s support for Mr. Wilders is on public record, this was an implicit insult of Dymphna and myself, as well as most of our readers. 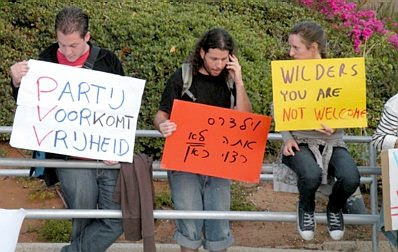 Mr. Keller is an Israeli peace activist. As you may recall, he said that he is the person who wrote the Hebrew text of the middle protest sign in the above photo. He is new to our blog, and may not be aware of our free-speech policies. We encourage a free exchange of opinions and debate on all topics, but within the limits of decorum and civility, as described in the four rules that are clearly posted at the top of the comment window. His incivility, by departing from those rules, derailed a comment thread that might otherwise have been productive.

Basic civility is an absolute prerequisite for any meaningful exchange of ideas. No one’s mind is changed by being called names or having his intelligence or moral character questioned.

Mr. Keller just sent us an email. Since it is more reasonably worded than his comment, I’m posting it below along with a brief response

I invite our readers to add their own views — in a civil manner:

It is now morning in Israel and I woke up to see the many reactions to my post which accumulated during the night. Since you closed the thread, I am unable to respond to the direct challenge made to me, and I would like to ask you to post the following:

I and my friends in the Israeli peace movement are certainly opposed to racism in whatever form and from whatever origin it comes. Racism is a phenomenon which certainly exists within any human society and must be opposed. We strongly object to assertion that Islam as such is racist, that all Muslims are by definition racists, and that one should oppose Islam as such and engage in a head-on confrontation with all Muslims as if they were a single homogeneous mass. This attitude is in our view itself racist and highly dangerous, and is all too uncomfortably reminiscent of the attitude to Jews which was prevalent in Europe during the 1930’s and which directly led to the worst genocide in human history.

I am married to a Dutch woman, Beate Zilvesrmidt, who was one of the main organizers and initiators of yesterday’s demonstration against Wilders. I know Holland which we often visit, and the people we know there detest Wilders and feel ashamed he has a key role in their country’s new government. We also happen to know some Dutch Muslims who are enlightened people, well integrated in Dutch society and with not the slightest intention of imposing anything on anybody. The same is true here in Israel, where we know many Arab Muslims — citizens of Israel and West Bank Palestinians — and are proud to count some of them among our personal friends.

The anti-Muslim diatribes of Wilders are highly dangerous to Dutch society, of which a Muslim minority is now an established part. He seeks to reverse and destroy the tolerant traditions which were Holland’s justified pride for hundreds of years, manifested for example in this country giving refuge in the 16th and 17th Centuries to Jews driven by savage persecution out of Spain and Portugal.

For Israel, a country which not only has twenty percent Muslims among its own citizens but is located in the very heart of the Muslim World, all its neighbors being countries with a predominantly Muslim population, adopting Wilders’ rabid and indiscriminate hatred of all Muslims and of the Islamic religion as such would be nothing short of suicidal. If we are to survive in this region where the founders of Zionism saw fit to locate the Jewish State, we must find a way to achieve a lasting peace with our neighbors — first and foremost with the Palestinians, our direct neighbors in this land who must be freed from the oppressive occupation which our country imposed on them for the past 43 years and given their natural right to form their own state at the side of Israel. Wilders’ ridiculous suggestion that “Jordan is Palestine” has long since been totally discredited in Israeli politics. The Palestinians are not going to go to Jordan and nobody can force them to go there. They will remain here as we will remain here, and in this land both of us must build our peaceful future.

Upon hearing that Wilders is about to come here, my wife and other Israelis of Dutch origin immediately started mobilizing people of good will to come and protest and show Wilders that he is not welcome. On the night before the action, the two of us sat down in the living room of our apartment and prepared signs, on material bought with our own money — she making the ones in English and Dutch, me the ones in Hebrew. We are very pleased with the response of peace-seeking Israelis, and Wilders will encounter the same if he shows his face in this country again.

Racism is a phenomenon which certainly exists within any human society and must be opposed.

This might be an interesting point to debate. However, “racism” was never an issue in this case, since our stance is against a supremacist political ideology known as Islam, and not any particular race. Some of our most dangerous enemies are Islamic zealots who happen to be Caucasians.

We strongly object to assertion that Islam as such is racist…

I have never asserted any such thing. Arabs are notoriously and documentably racist, but not Islam itself.

This is the anecdotal fallacy. Finding a few specific counter-examples to a proposition is not enough to invalidate it. One must demonstrate the statistical accuracy (or inaccuracy) of the stated assertion.

I, too, know some enlightened Muslims. This has nothing to do with our argument, and does not address the core issue. If 99% of the Muslims in the world were enlightened and not murderous terrorists, that would still leave 15 million deadly enemies who want to kill, enslave, or convert anyone who is not a Muslim.

The presence of hundreds of thousands of inassimilable Muslim immigrants is highly dangerous to Dutch society.

Israel, a country which not only has twenty percent Muslims among its own citizens but is located in the very heart of the Muslim World…

The vast majority of Muslims in those neighboring countries — and possibly those within Israel itself — desire to see Israel destroyed as a Jewish state. They wish to create a state in which any surviving Jews form a minority with less than full rights as citizens.

Surely you are not unaware of the fate of historical Jewish minorities in all countries in the Muslim Middle East…?

Catering to the anti-Semitic political aspirations of Muslims in or surrounding the state of Israel is a recipe for national suicide.

Indeed you must. Unfortunately, peace is never achieved through displays of supplication and appeasement, especially when confronting an Islamic enemy. Islam sees appeasement as a sign of weakness, and will press forward with ever greater demands until full conquest is achieved. This assertion is amply demonstrated by the history of Islamic expansion during the first thousand years after Mohammed’s death.

Wilders’… suggestion that “Jordan is Palestine” has long since been totally discredited in Israeli politics.

This is certainly true, but it is hardly proof that the idea is wrong or inaccurate. Useful and viable ideas are routinely discredited in the political arena, but this does not demonstrate that they are untrue. Mr. Wilders’ assertions are historically valid, and enjoy ample documentation which is available to anyone who chooses to do the reading.

There’s more that can be said, but this will suffice for the moment. Readers are invited to add their own (CIVIL!) comments below.

191 thoughts on “Is Opposition to Islam a Sign of Racism?”