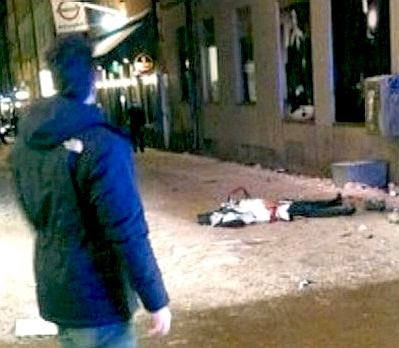 Sweden has just experienced its first suicide bombing, a Christmas present from the Great Jihad to Stockholm city center. There were at least two explosions, and one man was killed.

Our Swedish correspondent Reinhard has compiled a report on this breaking news story, based on translations from Swedish-language media. He says:

This is the first time anyone has blown himself up in Sweden, ever. To think that this is a completely random act is just silly. And now we have a jihadist e-mail, sent ten minutes before this completely unique explosion.

About 10 minutes before the explosions an e-mail was sent to TT [news service], and also to the Swedish secret services (Säpo), where a man addresses “Sweden and the Swedish people”. He refers to the Swedish silence concerning Lars Vilks’ paintings, the Swedish soldiers in Afghanistan and says that “now your children, daughters and sisters will die as our brothers and sisters and children are dying”.

“Our actions will speak for themselves. As long as you continue to wage your war against Islam and insulting the prophet and your stupid support of the pig Vilks,” says the man.

Whereupon he encourages all Muslims in Sweden to “stop sucking up and debasing yourselves”. He ends the message with another exhortation to “all the mujahideen in Europe and Sweden”:

“Now is the time to attack, do not wait any longer. Come forward with whatever you have, even if it’s just a knife and I know you have more than just knives. Do not fear anyone, do not fear jail, do not fear death.”

It is not clear from the audio files if the man speaking belongs to any organization. But he states that he has been in the Middle East and asks his family to forgive him for having lied to them.

“I never went to the Middle East to work or make money, I went there for jihad,” he says.

Säpo has not confirmed the contents to TT or confirmed having received the mail, which contains sound files where both Swedish and Arabic are spoken. TT has not been able to confirm that the mail is related to the explosion.

The car was registered to an “Abdul T”.

A witness who tried to give the man CPR says he removed the man’s Palestinian scarf while doing so.

The man apparently had a whole bag of explosives.

Sources for the above:

25 thoughts on “Christmas Jihad in Stockholm”