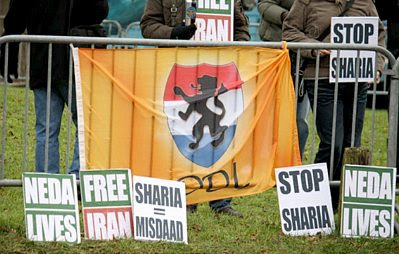 Strangely enough, although the DDL demonstration was tiny — no more than fifteen people — the police felt compelled to mount a display of overwhelming force, just to make sure that the “Islamophobes” didn’t get out of hand. Although the article below doesn’t mention it, the Dutch police actually sent a helicopter to circle overhead while the demonstration was going on.

Here’s the report from a DDL leader who was present, as posted at ICLA website:

Yesterday the Dutch Defence League went to The Hague in Holland to distribute leaflets near the Iranian embassy against the enforcement of sharia laws in that country. We told the police in advance we expected be there with a maximum of fifteen people, and stated clearly that we have nothing to do with right-wing extremism.

Somehow they didn’t believe us: when we arrived several police vans were surveilling the area around the central station, some patrol cops even drove through the station hall, and a railway employee friend told us they had been warned to look out for groups of right- and left-wing extremists.

We teamed up with a few others and then went to the spot, outside the city centre, where some other were waiting for us. When we arrived we had to laugh: many yellow bibs, a commando unit, patrol cops and normal police cars. Not to mention the secret services.

We decided to quickly show some banners and flags so we could take some pictures and then would leave to the city centre for a drink and some flyer-efforts: quite simply, we didn’t want to feel like caged monkeys. We told a police officer that we had a letter for the Iranian ambassador in which we demand that he force his government to immediately stop the enforced sharia laws in Iran. We were not allowed to post it, as we were part of the demonstration, and demonstrators were not allowed to enter the area near the Embassy. We then decided to end our demonstration so one of us could actually drop the letter in the postbox. Under the surveillance of a police officer, he was then was allowed to do so as a civilian.

Since we stopped our demonstration, we also lost our right to hand out flyers. We tried to hand over some flyers but we noticed we were been followed by a surveillance van. We decided to have a look at the Binnenhof, the place were the Dutch chambers [of parliament] are established: one of our participators was an Englishman and he never had been there. At the inside area we thought it would be fun to raise our DDL flag and take a photo. Wrong! We were immediately surrounded by police officers guided by secret service agents in possession of our pictures.

They told us we were not allowed to raise a political flag but we answered them that we are an apolitical group. Then they told us they knew we were from the DDL and part of the demonstration and therefore we were not allowed to raise the flag. We told them we had finished our demonstration and we were just taking tourist pictures. They took note of our names and let us go. We went for a beer and were still surprised by the diversity of police united we saw that day.

See the report at ICLA website for more photos, including the police, their vehicles, and the helicopter.

3 thoughts on “A Helicopter for the DDL”