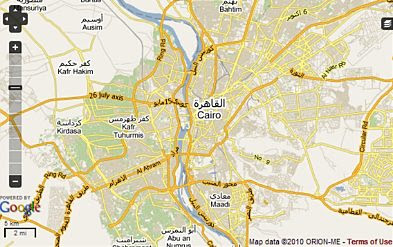 During the last few months there have been a lot of news reports about the high incidence of sexual harassment against women in Egypt. This does not just involve catcalls and wolf whistles, but runs the gamut all the way up to groping and rape. Women who appear too “western” are particularly vulnerable.

The Egyptian authorities have downplayed the problem, insisting that it is being sensationalized and blown out of proportion. Now a new Egyptian blog called HarassMap has been set up to chronicle and map the incidence of harassment, in order to make official denial more difficult. The group behind it has devised a system for victims to report incidents and display them on a map.

This project will implement a system in Egypt for reporting incidences of sexual harassment via SMS messaging. This tool will give women a way to anonymously report incidences of sexual harassment as soon as they happen, using a simple text message from their mobile phone. By mapping these reports online, the entire system will act as an advocacy, prevention, and response tool, highlighting the severity and pervasiveness of the problem. The project will utilize FrontlineSMS and the Ushahidi Engine.

And the executive summary:

The HarassMap Team includes volunteer activists with strong backgrounds in the issue of sexual harassment in Egypt and technical experts.

Rebecca Chiao holds an MA in International Development and International Economics from Johns Hopkins School of Advanced International Studies (SAIS), and has 12 years of experience working in NGO and program development. She designed, launched and managed ECWR’s Campaign Against Sexual Harassment between 2005-2007.

Amel Fahmy is currently the Program Officer for sexual harassment and FGM at the UNFPA in Cairo. She completed her MA in Anthropology at the American University in Cairo and the London School of Economics. Amel also served as Head of Team for UNICEF in Khartoum and Technical Officer for the World Health Organization in Geneva.

Sawsan Gad received her MA in Demographic and Social Analysis from University of California, Irvine in 2008 and her BA in Commerce from Ain Shams University in 2005. As a Freelance Researcher, Sawsan has experience with GIS, gender (dis)parity and media.

The Egyptian urban elites have been westernized for several generations, and many of them are not at all interested in the new Islamic fundamentalism that is bubbling up from below via the Muslim Brotherhood.

This initiative will be an interesting one to keep an eye on.

2 thoughts on “Putting Harassment on the Map”