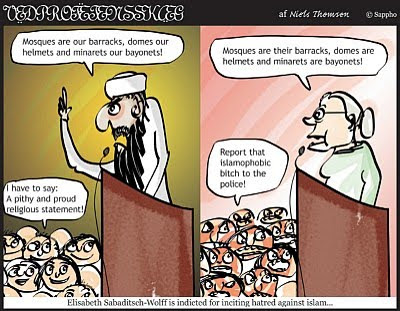 Like the trial of Geert Wilders, next week’s trial of Elisabeth Sabaditsch-Wolff will be a historic milestone in the resistance to the Islamization of Europe — or a tombstone for European civil liberties, if Elisabeth is convicted.

The first hearing in Elisabeth’s case will take place in the Vienna court on November 23rd, starting at 9:00am CET (3:00am EST). In collaboration with Europe News, Tundra Tabloids, and the Save Free Speech website, I will be live-blogging the event as early as I can manage to get up that morning.

The reporting team will aim to decipher exactly what the offense is that Elisabeth has been charged with. It is expected that the entire audio recording from the FPÖ seminars will be played in court, permitting the prosecutor to explain in detail what cannot be permitted to be said, and why the religiousness of Islamic teachings makes it so.

The defense, for its part, can be expected to document the accuracy and truthfulness of what was said, thus focusing on the core problem: Is it illegal to speak the truth about Islam?

The live-blogging will report core issues as they unfold during the day, which may become detailed and extensive. At the end of the day, an edited report of the highlights will be published at one or more of the participating sites.

Stay tuned on Tuesday, and keep an eye on the live-blogging pages at Tundra Tabloids and the ESW defense site.

NOTE: Special thanks to Niels Thomsen from Sappho for the cartoon.

7 thoughts on “Live-Blogging the Trial of Elisabeth Sabaditsch-Wolff”