Below are the contents of the document file that will be used by the defense in the trial of Elisabeth Sabaditsch-Wolff: 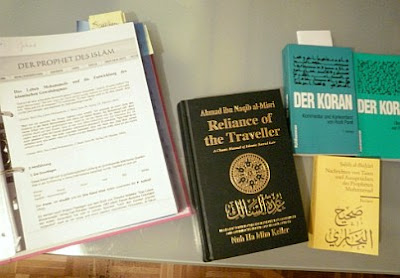 The book that enjoys the central place of honor in the photo is ’Umdat al-salik wa ’uddat al-nasik, or The reliance of the traveller and tools of the worshipper. It is commonly referred to as Reliance of the Traveller when cited in English.

This particular version is the Revised Edition (published 1991, revised 1994) and is “The Classic Manual of Islamic Sacred Law ’Umdat al-Salik by Ahmad ibn Naqib al-Misri (d. 769/1368) in Arabic with Facing English Text, Commentary, and Appendices”, edited and translated by Nuh Ha Mim Keller. The publisher is listed as amana publications in Beltsville, Maryland.

It is considered an authoritative source on Sunni Islamic law, because it is certified as such by Al-Azhar University in Cairo. There is no higher authority on Sunni Islamic doctrine than Al-Azhar; it is the closest equivalent to the Vatican that can be found in Islam.

So whatever you find in Reliance of the Traveller is definitive Islamic law. No Sunni Muslim jurist would argue against anything cited there.

And, as we will soon discover, everything that “denigrates religious teachings” in Elisabeth’s seminar can be supported by one or more passages in al-Misri’s treatise. From beating your wife to excising your daughter’s genitalia: it’s all in there.

However, this still may not be an adequate defense for quoting and referring to it. It has been well-established in a number of jurisdictions — including several in the West — that a non-Muslim who quotes the Koran accurately can still be convicted of “hate speech”. This aligns with the definition of Islamic slander (also to be found in Reliance) which considers anything that insults Islam, whether true or false, to be defamation.

So Elisabeth may still be convicted. Under the Sharia rules used in the brave new world of the Islamic Caliphate of Eurabia, she actually is guilty.

We’ll find out soon enough whether the Austrian judge is willing to buy into all this nonsense.

10 thoughts on “The ESW Defense File”