This week’s syndicated column by Diana West features Elisabeth Sabaditsch-Wolff. Some excerpts are below:

Elisabeth Sabaditsch-Wolff Versus the State of Denial

When Barack Obama spoke in Mumbai about “the different meanings” of jihad, he set up us up again for the Big Lie: “I think,” the 44th president said, sounding much like the 43rd president, “all of us recognize that this great religion in the hands of a few extremists has been distorted to justify violence toward innocent people that is never justified.” 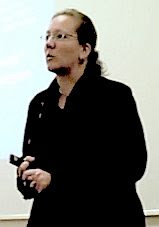 All — all — of the sacred books and schools of Islam say differently. Every, single one. The fact is — not the fantasy — there is no distortion of Islamic texts required to justify the violence of jihad from Mumbai to Tel Aviv to New York City to Bali to Madrid and beyond.

But we, dhimmi-citizens of an Islamizing world, are not supposed to notice the links between the violence and the faith, the faith and the law, the law and the violence — and certainly not say so out loud. Most people don’t. Increasingly, this state of denial is enforced by actual states of denial – the most recent example being Austria, which, in a trial on Nov. 23, will attempt to use “hate speech” laws to send Elisabeth Sabaditsch-Wolff to prison for as long as three years for statements about Islam very similar to those I’ve just written.

The Viennese mother and housewife originally approached the subject of Islam from her unique background that includes a childhood stint in Iran during the Islamic Revolution in 1979 when her diplomat-father was stationed there; and her own work experience with Austrian embassies in both Kuwait at the time of the Iraqi invasion in 1990, and Libya, on 9/11 (“The Jews did it!” Elisabeth’s Libyan landlord shouted at her that same day).

She studied the Islamic texts and commentaries, the apologetics and the critiques. Empowered by her natural right to free speech, she decided to educate others in her native Austria about the Koran, about Islamic law (Shariah), in seminars she offered under the auspices of the pro-Western-civilization think tank Wiener Akademikerbund (Association of Vienna Academics). Contracted by the anti-Islamization Freedom Party (FPO) in 2008, Sabaditsch-Wolff has been educating Austrians about Islam ever since.

“The groups were very small at first, sometimes as few as five or six people” she recently told me. “Later on, the numbers rose to 35.” Last fall, one attendee in particular seemed “overly enthusiastic about the topic,” Elisabeth recalls. She turned out to be a journalist who would brand the seminar a “hate school” in a sensational story for NEWS, a left-wing publication…